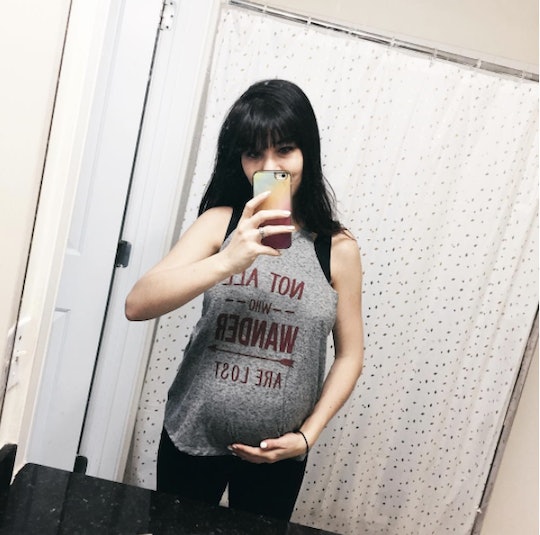 I'm So Worried My Daughter Will Inherit My Eating Disorder

When I think of the things I hope to pass on to my unborn daughter, I could easily list dozens of ideas. I’d love it if she inherited my love of musical theater and Broadway, and I definitely wouldn’t mind if she ended up in the drama club in high school. I’d be more than OK if she shared my mild obsession with cats, and I honestly wouldn’t even care if she wanted to start drinking coffee in middle school, which is admittedly when I started becoming a Starbucks regular.

But if there’s one thing that I hope she doesn’t inherit from me, it’s my eating disorder.

I was diagnosed with anorexia shortly after graduating from college. If I’m honest with myself, I’d have to say that it started way before that, although pinpointing the exact when and how and why is immensely difficult, if not impossible.It was only after I recognized that I was struggling and admitted that I had a fraught relationship with food that I was ready to ask for help.

The process of recovery wasn’t simple, and in many ways I still feel as though I am in recovery. While it’s different for everyone, I think that's the case for many people with eating disorders: recovery is very much an ongoing process. There are certain things that you never forget – or, at least, that your body never forgets.

One of the first questions people ask me when I talk about my eating disorder is: “Why do you think it happened?” It’s a tricky question to answer, and, to this day, I’m not entirely sure what the right response is. After all, there’s no definitive cause-and-effect when it comes to eating disorders. The National Eating Disorder Association lists dozens of contributing factors that might contribute to the development of an eating disorder, ranging from chemical imbalances to “troubled personal relationships.” But to date, no one has identified one sole cause at the root of the disease.

My E.D. spiraled out of control during my senior year in college, right before I was about to graduate with a theater degree. It was a perfect storm of stress: I was mourning a fallout with my best friend and navigating the pitfalls of a textbook “on-again, off-again relationship." I had no idea what I was going to do after I graduated, and for someone who always likes to know what’s coming next, that was a major source of anxiety for me.

At the height of my eating disorder, my mind was constantly filled with numbers: calorie counts, weight, body mass index (BMI). As much as I’ve tried over the years, I haven’t been able to fully erase those numbers from my brain, the way one might involuntarily remember a math formula from the 7th grade.

I felt like I had no control over my life, which is maybe why I sought to gain control over my eating. Restricting provided me with a sense of calm. When the thought of the post-graduation abyss made me feel anxious, I was able to find comfort in my daily rituals of writing down calories and weighing myself. But even that isn't the full story.

At the height of my eating disorder, my mind was constantly filled with numbers: calorie counts, weight, body mass index (BMI). As much as I’ve tried over the years, I haven’t been able to fully erase those numbers from my brain, the way one might involuntarily remember a math formula from the 7th grade. And even though I’m at a healthy weight and have been able to gain the appropriate amount during my pregnancy, I still haven’t gotten to the point where a dessert is just a dessert and not also a number to fear.

The moment I found out I was pregnant, I started worrying about the future. I particularly worried about whether my daughter would also have an eating disorder. I don't want her to live with this inside of her, this sleeping demon waiting to be woken up by some unsettling or stressful life event.

My concern is not unfounded. Some studies have shown that eating disorders might be hereditary, but as one study points out, it's unclear whether genetics or environment play a role in eating disorders being passed down from generation to generation. I can't control my genes, but I can control the environment my child grows up in. So I hope there are things I can do to help prevent my daughter from going down the same road.

There’s still a huge stigma surrounding eating disorders, and mental health in general. But a way to break through that stigma is simply by talking about it. Mental illness shouldn’t be seen as a taboo subject, and one’s psychological health should be handled with the same level of priority and care as their physical health. With that in mind, I want my daughter to know about my experiences; I can’t imagine hiding any of this from her. I want to establish an understanding that it’s okay to talk about mental health, and that no topic is off-limits.

At the same time, I don’t want my history to become a how-to guide. That is the one thing I struggle with any time I talk about my eating disorder. There must be a balance somewhere between smashing the stigma while not providing others with the tools to replicate my mistakes. And maybe that balance is simply explaining what I’ve learned on the other side.

I hope, with all my heart, that my daughter makes better choices than I did. But if she doesn’t, I’ll make sure that she knows that she can talk to me about any and all of it, that I will be there for her every step of the way.

So here is what I’ve learned: my eating disorder ruined my life. It infiltrated every good memory I've ever had and turned it into a source of distress. And here's the kicker: although I restricted my eating for years, I never felt satisfied with my physical appearance. There was never a point where I looked in the mirror and said to myself, “Okay. I did it. I can stop now.” I always thought that point would come, and I set my “goal weight” lower and lower, thinking that surely this number would make me feel beautiful. But there was never a magic number.

These are the things I will tell my daughter one day: not what I ate, or how thin I became, but how terrible it all felt. That it wasn’t worth any of it, that sometimes I wish I had a time machine to go back to the first time I skipped a meal. But at the same time, it made me who I am today, because we are all a product of our experiences and the choices we make. I hope, with all my heart, that my daughter makes better choices than I did. But if she doesn’t, I’ll make sure that she knows that she can talk to me about any and all of it, that I will be there for her every step of the way.

If you struggle with disordered eating, please seek professional help or contact the National Eating Disorder Association helpline at 1-800-931-2237.

More Like This
41 Strong & Sweet Baby Boy Names That Start With “K”
Yes, It’s Possible To Get Pregnant If You Have An IUD
Pelvic Pain During Pregnancy: What Causes It & How To Deal With It
What Is Acid Reflux Tape? Chrissy Teigen Swears By It