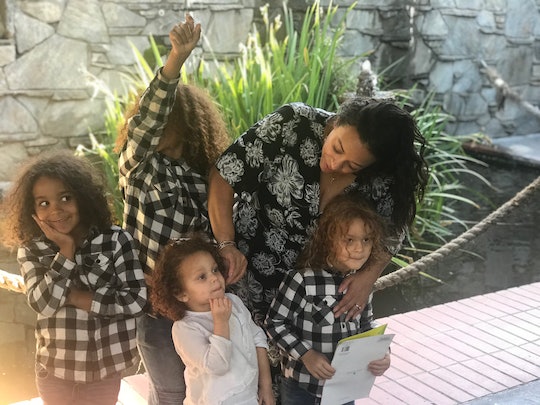 I Have No Idea What I'm Doing As A Mother, & Neither Do You

What makes a good mother? What is the true definition of “nailing it” in motherhood? I’ll circle back around to that while you think about it. I have four children and I think that when people know this they think my husband and I are just like perpetually knocking it out the park at every turn, because why else would we keep having kids if we weren’t like really good at it? Admittedly, I’m not fielding questions as a parenting pro left and right, but there are times I’ll get text messages and Facebook messages from friends asking me how they do this, that and the third. And I’m always like “I’m sorry, did you mean to send this to me?” because the truth is I have literally no idea what I am doing as a mother at any given second of a day.

I tend to have kind of have a laissez-faire attitude when it comes to my style as a parent. And for years I really tried NOT to carry on that way. But I quickly realized that it’s not in my nature to be ahead of schedule, up before the kids, organized within an inch of my life and that winging it is basically just our family motto.

For example, my oldest just got a headset to talk to people while he plays Fortnite. I found him in the living room playing and speaking Spanish to someone using Google translator. My response “Don’t give him your real name, address, and if he asks you to send him pictures of you drop the controller and run.” and I walked away. Did I do the right thing? Will I regret this moment when I’m standing in front of a detective and I have to tell them I let him chat in Spanish to some Fortnite player and to make matters worse I don’t even speak Spanish so I have no idea what they were saying to each other? I sincerely have no idea. But he’s having fun and he’s learning a second language at the same time so maybe it’s OK?

My kids never went to bed before 10 p.m. this summer — it was a family movie night practically every night and I distinctively remember a few dinners consisting of popcorn and root beer floats — but it was summer and we laughed and and it’ll be OK

Our summer has come to an end and we didn’t hit anything on our summer bucket list, my plans for academic growth were thwarted by popsicles and blow up pools, and I’m still trying to figure out if it’s too late to start the summer reading list. My kids never went to bed before 10 p.m. this summer — it was a family movie night practically every night and I distinctively remember a few dinners consisting of popcorn and root beer floats — but it was summer and we laughed and and it’ll be OK because that’s how you start those conversations at Christmas in 20 years about “remember when we were kids?”

Back to my original question. So what really makes a good mother?

The thing about parenting is you have no idea if you're doing it right until that moment. One day it may not matter if you fed Billy boob milk or if you didn’t practice co-sleeping or how much time you gave your children on their iPads. One day there will be a true test of whether or not you’ve nailed it. Be it the time your child needs to defend the defenseless or is on the other side of a really, really, earth-shattering bad decision. The best parenting is done by just feeling the moment that you are in. Does this feel right, today? What felt right yesterday may not be right next week or what was right for one child, probably won't be right for the next. Having to live under the constant pressure of measuring up and making every, single right decision is a tall order for me and probably for you as well, so let it go.

I decided a while ago that I could worry myself sick trying to choreograph the dance of motherhood within an inch of my life or I could just enjoy it and enjoy my children. For years I thought being a good mother looked like it does on Instagram or Pinterest. I thought it was found in tips and hacks to getting picky eaters to eat okra and 3-year-olds being able to read. And I tried that lifestyle for a little while. I never succeeded with the okra and frankly, broccoli is still a hassle. We have dance parties, wrestling matches and Disney Ditch Days. We eat cake and on occasion, we (OK “they”) run naked in the backyard.

I don’t know from day to day if the decisions I’m making will seriously impact their gut health or won’t even matter in the long run. But try as I might I still plug away day after day moment by moment, minute by minute, tantrum to tantrum and to sea to shining sea!