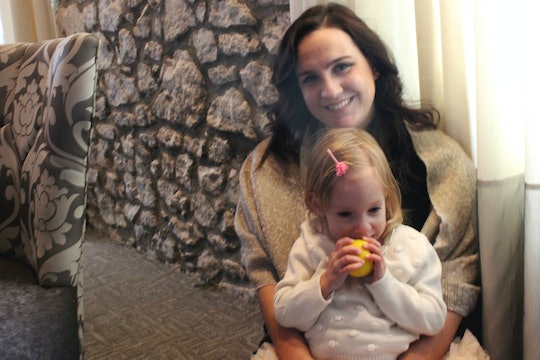 I Have Premenstrual Dysphoric Disorder & It's Debilitating

I’ve struggled with depression off and on throughout my 20s, but I began to notice a few years ago that the struggling was worse a week or two before I got my period. My symptoms, though, weren’t the usual PMS-related complaints that a couple Advil and a hot water bottle could ease; they included extreme, zombie-like exhaustion, overwhelming mood swings, and an inability to concentrate on anything, or feel like a normally-functioning human being capable of doing normal things. I noticed my depression symptoms would hit again during that time, as though the medication I usually take had temporarily stopped working. I’d even noticed that my skin would be more sensitive, and a painful, chronic skin condition I’d had for years would flare up until my period came. Eventually I learned that I have premenstrual dysphoric disorder, and, honestly, it's absolutely debilitating.

Although it’s long been both a punchline and the misogynistic go-to explanation for when a woman is less than pleasant (oh hey, Donald Trump!), PMS is a real medical issue with real physical symptoms. And common, too: it’s estimated that as many as three out of four women experience PMS symptoms. Most often, these symptoms include things like bloating, cramps, breast tenderness, irritability, and food cravings, but for some women this hormone-induced struggle means something else entirely.

After about six months of tracking my own symptoms, I brought the information to my doctor. It turned out that there was a clear pattern in my period-related struggle: I’d feel completely normal and fine and functional until I’d ovulate, and then all of my symptoms would hit and my life would be hell until my period came, even though I was continuing to take the antidepressant medication that normally helps immensely.

When I mentioned this to my doctor, she nodded and said, to my surprise,

I learned that premenstrual dysphoric disorder (or PMDD) was like an extra-terrible form of regularly-terrible PMS, and that it affects roughly between two and 10 percent of menstruating women. Symptoms include things like extreme sadness, hopelessness, anxiety, trouble focusing, lethargy, insomnia, binge eating, headaches or muscle aches — but only during the post-ovulation, luteal phase (things settle down again once your period starts). Knowing this was a real thing that actually happens and wasn’t just a figment of my own imagination was incredibly validating, and more importantly, meant that we had more information about what was going on in my body and how it might need to be treated. But the downside was that treating PMDD isn’t easy or straightforward, and if/until we found something that worked, I’d be stuck hating the world for roughly half of the month, every month.

Being a freelance writer helps a little, because it means I have a little more leeway to schedule my work around my symptoms. I can get the bulk of my writing done during the “good” stage of my cycle, and then take it a little easier during the “I want to run and hide” stage. But two people I can’t run and hide from when I’m stuck in PMDD hell? My toddler twins.

I stay at home with my 3 year olds, and, in general, it’s the best. During the first half of my cycle, things are great. We go to the park, we play, I make the healthy, well-balanced meals I’ve planned ahead for, and we don’t do a lot of screen time. I generally feel like I’ve got the mom thing more or less down. But after ovulation, all of that disappears. From the moment the kids wake up until the moment they fall asleep, I struggle. Those are the days we watch too much TV and eat McDonald’s for dinner and stay at home in our pajamas the entire day. Those are the days I beg my husband to call in sick to work, or for any friend I’ve ever met to come over and help keep me from bursting into tears. Those are the days I am really, really grateful for my twins’ super-involved grandmothers.

Even though I know this is something that happens, even though I know it is real and an actual medical diagnosis and not something I’m faking or imagining or something I could just shake off or wish away if I tried hard enough, the effect PMDD has on my ability to be the kind of mom I want to be for my kids is heartbreaking and crippling. I carry so much guilt on these days, knowing that I should be getting dressed and I should be cleaning the house and I should be engaging with my children and I should be trying harder. But on those days, trying to get myself to do all of the shoulds feels like trying to start a car with a dead battery. It just won’t happen.

When I’m feeling good, I try to remind myself that it’s OK not be an awesome mom all of the time. I try to tell myself that my kids won’t be ruined by some extra screen time or some fast food. I try to tell myself that, if it were someone else — a friend, or even a stranger on the street — I’d tell her it’s not her fault, that she shouldn’t feel bad about something she can’t control, and that her kids are still happy, well-adjusted, healthy children who are loved and treated with respect even when they’re eating McNuggets for dinner.

I remind myself it’s OK to ask for help, to call my friends or my mother or our occasional babysitter and ask them to come over, or to beg my husband to stay home because I need him to. But the reality is that no matter how OK it is, it doesn’t make it any easier. Some days I just can’t mom, no matter how hard I try. So on those days, I take a deep breath and go through the mental roster of what I can do: I can get through this day. I can look forward to tomorrow. I can take care of my kids (and when I can't, I can make sure they're taken care of). And when the pain is really bad, I can close my eyes and wait for it to pass, knowing full well that it's the best I can do.