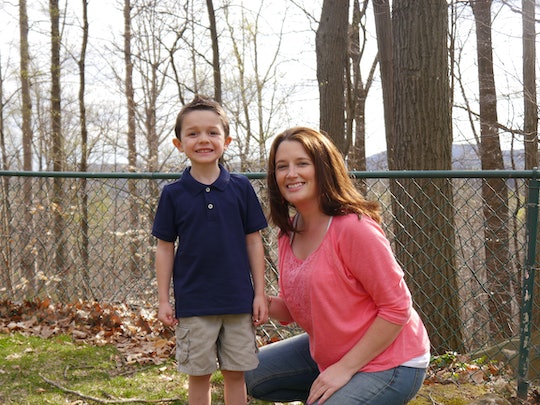 In two weeks, I will take my 5-year-old son to register for school. Again. My husband and I went through this process last year, but at the last minute we changed our minds and decided to hold our son back from kindergarten. This was an extremely difficult decision for us to make, but this past fall, instead of watching him board a yellow school bus, we enrolled him in another year of preschool.

Although many parents of children with summer birthdays decide to delay kindergarten because they don’t want their child to be the youngest, this was only one small factor in our decision. I was mainly concerned with my son’s ability to keep up academically and socially with his peers. Since the age of 2, he’s been receiving early intervention services to help him with speech and attention. He’s always struggled following directions and focusing in crowded surroundings, which makes learning environments challenging. Because of this, I was concerned that he would struggle in kindergarten, and if he did struggle, would it negatively impact his entire education?

At the time I needed to make my decision, he was progressing nicely, but he still seemed behind his peers. His teacher said he was “meeting most of the preschool academic goals along with his classmates,” but he still hesitated to speak up during class and did not ask questions. He wasn’t able to write his name or draw a stick figure, and though classmates seemed to be able to fill out worksheets and color pages, he came home with blank pages. He’d been too distracted to complete his work.

As much as I wanted him to show progress, the fact that he had made it incredibly difficult for me to decide. I wanted some sort of tangible proof. I wanted to be able to point to some sort of chart or graph if anyone questioned why I was holding him back so I could say, “here! This is why!” But I couldn’t.

I also worried about whether or not people would think I was just seeking an advantage for my son. Waiting a year would make him one of the oldest and perhaps biggest in his class. This might expose him to different opportunities, in both academics and sports, than those younger and smaller. I wasn’t interested in creating an opportunity for my son to “get ahead.” I only wanted the best opportunity for him. As an educator myself, I know how difficult it must be to have such a wide range of abilities and ages in a classroom. Because of this, I wanted to make sure there was a clear reason to wait a year.

He was behind in a way that might not show up on paper but would cause him to struggle to be heard, to ask questions, to make friends, to succeed.

Since he already had an IEP (Individualized Education Program), he was re-evaluated by the school district in early spring, and I waited anxiously for the results. If his evaluation showed significant delays, it’d make our decision much easier. But it didn’t. In fact, he only barely qualified for speech services. As much as I wanted him to show progress, the fact that he had made it incredibly difficult for me to decide. I wanted some sort of tangible proof. I wanted to be able to point to some sort of chart or graph if anyone questioned why I was holding him back so I could say, “here! This is why!” But I couldn’t.

Instead, I had just my gut to go off of, and my gut was still telling me that he was too far behind. Because of his speech delay, he struggled in many social aspects. He didn’t greet people on his own, and had to be prompted to say hello or goodbye. During unstructured play time at school, he’d mostly play by himself or simply imitate other kids’ actions, good or bad. He was behind in a way that might not show up on paper but would cause him to struggle to be heard, to ask questions, to make friends, to succeed.

He might have caught up to his peers eventually, but it would be a constant struggle until then. And when he finally did catch up, academically and socially, would it be too late? Would he already be so frustrated with school by then that maybe he wouldn’t want to learn? Would he still have the confidence to answer questions when he had been wrong for so long?

Following the testing, I met with school administrators, a school psychologist, and special education teachers. I wanted to hear from professionals about what they thought was best for my son. They first emphasized that a child entering kindergarten does not need to be ready for kindergarten, but the school needs to be ready for the child if he meets the age requirement. Then, in almost the same breath, they spoke of the rigors of kindergarten, testing, and academic standards. Some even shared personal stories of having waited a year to start their own children in kindergarten. But no one would tell me the one thing I desperately wanted them to, because no one knew what the best course of action was for my own son.

This was a decision that would impact his entire education, and ultimately, his life. It’s one of the millions of decisions that will shape my boy into the man he’ll one day become. And what made deciding that much more difficult was the fact that there wasn’t an ever defining moment that made it all clear.

Like any good mother, I asked Google whether or not you should wait a year to start kindergarten. I was frustrated with the lack of current facts and statistics available, and only further disappointed because most of the links I found went to stories with outdated information or to very opinionated blog posts. I kept reading the same phrase over and over again in every story — you’ll never regret waiting, but you may regret sending him — and it rang true. What was the harm in waiting? Having an extra year to master new skills and gain confidence in his abilities would only benefit him. I could only see advantages: he’d be gifted with the time to be able to fine tune his social skills, increase his attention, master his letters and numbers, and focus in crowded environments. So with all of this in mind, I decided to wait an extra year to register him for kindergarten.

As an educator, mother, and constant worrier, deciding to hold my son back was one of the most difficult decisions I’ve made as a parent. I began to realize that no school administrator, teacher, book, or blog was going to tell me what to do. I had to make this decision for myself, and it wasn’t just like deciding whether or not to sign him up for t-ball or the community library. This was a decision that would impact his entire education, and ultimately, his life. It’s one of the millions of decisions that will shape my boy into the man he’ll one day become. And what made deciding that much more difficult was the fact that there wasn’t an ever defining moment that made it all clear. It was more like a steady climb. I understood this was the best course of action for my him and as his mom, I trusted myself to make the call.

He wasn’t ready for standardized tests, but today in preschool he sure learned a great deal about dinosaur fossils.

Although I was plagued with worries at first, they’ve gradually waned. My son was excited to go to preschool this past fall. My husband and I switched him to a different preschool, so he would be exposed to new curriculum, classmates, and teachers. I’d been worried he might think that he was being left behind if he stayed at his old school and watched his classmates leave without him, but he was mostly just disappointed that he still couldn’t bring a Paw Patrol lunch box to school.

I’ve watched him thrive in school this year. Giving him another year to explore and learn in a less rigorous environment has allowed him to solidly grasp the skills he’ll need to be successful in elementary school. He wasn’t ready for standardized tests, but today in preschool he sure learned a great deal about dinosaur fossils.

In a more relaxed preschool environment, with a smaller teacher-to-student ratio, he’s slowly started to gain the social skills necessary to make friends. He no longer qualifies for speech therapy and now asks thousands of questions a day. He wants to learn about the world around him, a curiosity that came late, but is here to stay. Most importantly, he hasn’t slipped through the cracks. He’s not struggling, and I firmly believe that he won’t next year because he’ll be better equipped for the challenges ahead. For now, he’s neither ahead nor behind in his preschool class. He’s just where he belongs.

This decision is extremely personal. Each child, circumstance, and school is different. And, as frustrating as that might be, I discovered that I was the only one who could make this call. It’s one of the hardest aspects of being a parent; we are not handed a game-plan that guarantees the best results. Instead, we’re asked to make a series of decisions with the best intentions and hope for the best.

I’ll admit there was a touch of sadness last fall when friends were posting pictures of their 5 year olds waiting at bus stops or stepping onto buses with book bags too large for their tiny frames. It felt a little bit like he was missing out; that I was forcing him to fall behind. I had to remind myself that life is not a race. He took a detour, a different path, but he’ll get there in his own time.