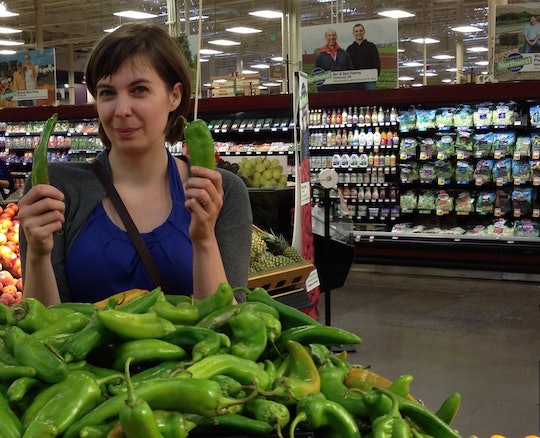 I Hid Fruits & Veggies In My Toddler's Meals For A Week, & This Is What Happened

I never thought I’d be That Mom. You know the one. Before I had a kid (I see you laughing already), I thought my children would grow up eating vegetables, and therefore love them. Boom. That easy. All you need to do, logic and some carefully selected anecdotes told me, was eat vegetables during pregnancy and while nursing. When my son was old enough, I’d provide the most lovingly prepared purees, nurturing his love of an array of fruits and vegetables for a lifetime of health and vitality. I know, OK? I know.

Fast forward to present day, and my son has never eaten a puree I’ve made myself, preferring instead expensive mass-produced pouches from the store. He still eats nutritious foods, albeit many in pouch form. After a while, you get tired of making special effort to make foods the kid is just going to reject anyway. Who knows why he hates produce that doesn’t come in a tube? It’s so hard to predict what might pass through: a square of roasted sweet potato might look awfully tasty one day but be rejected the next. He used to eat bananas daily, but slowly phased them out. Now he’ll barely take a bite without fussing. I want my son to have a healthy, balanced diet full of all the nutrients kids at his age need, but I'm running out of ideas to make sure he gets the foods he needs. Unless, of course, I get sneaky.

I've long heard of parents sneaking fruits and vegetables into their kids' favorite dishes, but I've never really thought to try it myself. For starters, it seemed like a true commitment, and it also seemed totally hit-or-miss. If it backfired, would he swear off my home-cooking forever?

I took a week to try “sneaking” fruits and vegetables into our meals in a way my 2 year old might try and enjoy, hoping it would give me some insight into what he’d eat and why. The worst that could happen would be we’d have some wasted food, but we have some of that anyway. The best that could happen would be that we’d find some new recipes to add to our family repertoire. Also, I like being sneaky.

For this vegetable espionage experiment, I tried a hidden veggie mac and cheese recipe I found on Pinterest, with butternut squash, cauliflower, and carrots. I thought, if you’re gonna hide some vegetables, why not just go for it? You cook all the veggies until soft, and puree them, and add them to a cheddar and cream cheese sauce. I even used whole wheat pasta.

Results: We nailed it with this recipe! My son had two and a half helpings and wolfed down leftovers the next day. It was more work than I usually do on a weeknight, and made a lot of food for three people, but it was totally worth it. At just barely 2, this kid is smart about a lot of things, but he doesn’t make much of a connection yet between what I’m cooking up in the kitchen and what he’s served at the table. If I plunked a piece of cauliflower on his plate, no dice. But if I cut it up and puree it? No big, apparently, as long as you add pasta and cheese.

We go through peanut butter like no one’s business in this house. We used to go through bananas just as fast, but they’ve been deemed unsatisfactory as of late, according to the youngest member of the family. So, I thought I’d try the whole healthy popsicle thing. He’s eaten a couple of bites off my fruit popsicles, and I figured, why the hell not; we needed to use up two freezer bananas anyway. Because we always have peanut butter and bananas on hand, I figured banana-yogurt-peanut-butter popsicles would be an easy win and a good anytime snack. I blended everything together, tasted it… and quickly decided to add some honey. (Spoiler alert: It did not help.) I froze them anyway.

RESULTS: Total failure, for the kid and for us. I asked my husband to serve our son the pops, and I’m not sure my dear lover has the same sense of theater as I do. He was decidedly less dramatic in his performance.

“Popsicles! They’re good,” I heard him say from the next room. The kid was not impressed. He had a few licks with a concerned look on his face, and then told us he was all done. We got him a new snack. We tried a few more times, with no more luck. (In our house, we encourage you to please try new things, but if you say “no thank you,” we respect that. Are you surprised we get get a lot of “no thank you” lately?

If your Facebook feed was anything like mine was three years ago, then you’re very familiar with the concept of cauliflower pizza crusts. “They’re actually really good!” people would effuse, which was not exactly strong enough praise for me to give up the bread. Still, I was open to the idea of trying one. Someday. Probably. Maybe. Since my kid is a human being, he loves pizza. Would he love a pizza without the bread? I dove into my recipe files to find out.

This “pizza” crust was a gluten-free mix of cauliflower, egg, and cheese. We added tomato sauce and more cheese. On three quarters of the pizza, I added mushrooms and olives. Trying the crust as a new thing seemed like enough. Pushing olives and mushrooms, too? Usually, if he gets a speck of a particularly unwanted element in his food, he fusses until it’s removed. I didn’t want to ruin the entire experiment by stressing him out over an olive. So we went halfsies on the pie.

Results: He loved it! Unfortunately, the recipe we followed was too small and I had to scramble to make more dinner. Also, I added too much cheese (blasphemy!), somehow forgetting that half the crust was already made of cheese. Is there such a thing as too much cheese? Strange, but, yes.

It’s strange to remember how optimistic I was about this recipe. My son just recently loved some “chickpea fritters” at a local restaurant, and I was riding high on that success. Zucchini is a low-stress vegetable to experiment with and, at least in the summer, they’re cheap and easy to work with. Even if no one wants your zucchini dish, you didn’t spend a bazillion dollars just trying to feed your family. I’d found this recipe futzing around on Pinterest and it looked pretty good, so I made them to go on top of some pasta with red sauce.

Results: He took one bite and then got mad about it. Immediate, clear rejection. I have no idea why — I was pretty confident about him liking the fritters, to be honest. Maybe he took offense to the bits of green that shone through the cheese? Maybe I didn’t make it as delicious as the restaurant had? Maybe he’s a budding vegetable-garden elitist? To really dig the nail in the coffee, he wolfed down plenty of pasta. At least the grownups liked the fritters?

This kid loves his muffins. If you want him to eat a blueberry, all you have to do is encase it in flour, sugar, and butter. He talks a big talk about apples, but you put one in front of him, and you’d think you’d mortally offended him. He will, of course, suck down an expensive pouch of applesauce happily. As of recently, he’s given up on his usual yogurt and applesauce for breakfast, so we’ve been in search of a few new ways to get him fruit. Enter the Apple Oat Greek Yogurt Loaf, because I couldn’t find my muffin pans.

Results: He was so excited when I offered him “apple bread”, but I was more guarded. He ate most of a big piece quietly and happily. Soon, though, it dawned on him that, despite the word “apple” being employed, he was not getting a pouch of applesauce. I quickly put two and two together: He was just eating the bread and humoring me in the hope of applesauce to come. He was a bit disappointed, but but we were able to talk him down. Still, he seemed happy to see and eat leftovers the next day.

I looked at a few recipes for mini frittatas and almost laughed it off: my son won’t eat eggs or vegetables; how am I supposed to get him to eat a freaking omelet?! Lately, he’s been reading If You Give a Pig a Pancake everyday, sometimes several times a day, and he loves pancakes, so I figured maybe if I just played it up, maybe he’d play along. I decided to try and make the frittatas look more like "lunch pancakes" (I even called them that), to make them more exciting — and to tie them into the book. I gave it my best shot, OK?

Result: I have probably never cooked anything that looked less aesthetically pleasing, but surprisingly, he loved it. They’re basically mini frittatas, and I am terrible at making frittatas. But the kid ate one and a half of them, because he saw pasta and he loves pasta, even though his portion had a good amount of egg and cauliflower. Go, me.

Did Sneaking Around Help At All?

I’ve read it takes repeated exposures for a person to learn to like a new food, and that kids usually don’t need as much food as their parents think they do, so geez, we should all relax. After trying all of these sneaky ways to get my son eating better, a lovely thing happened: He tried a blueberry, raspberry, and a strawberry — totally unprompted — at a local farmer’s market. I felt so vindicated as a parent and a lover of fruit, delighted by this small miracle. Naturally, he rejected the blueberries when I tried to give him some at home the next day, but he did eat some strawberries. Small victories, people, small victories.

It’s a huge pain and a disappointment when you go out of your way, and take money out of your budget, to make something that your kid doesn’t like, but that doesn’t mean I’m only limited to the “kid foods” I know he’ll wolf down. It’s my responsibility to make sure that he eats his fruits and veggies, true, but also to do my best to make sure he ends up an adult with a healthy relationship with food. That means offering him healthy choices at every meal, even when it’s a pain. It doesn’t mean bending over backward to do it, or vowing to never give him a chocolate chip cookie for a snack.

I do think we’ll start cooking more with him in mind, and we’ll try to be more adventurous by asking him to try new things. I’m going to be more open to letting him try things I don’t think he’ll like, and we’ll keep making healthy muffins … as soon as I can find my pans.