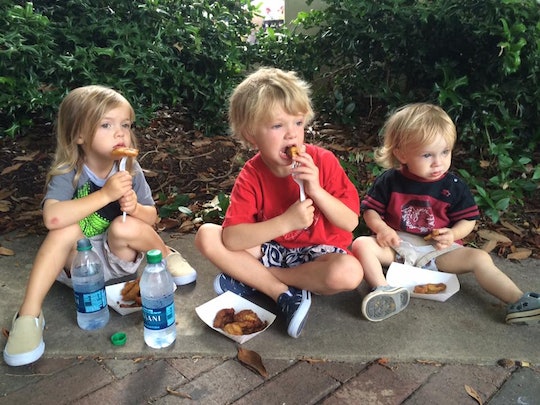 I Homeschool My 3 Sons & I Love It

I’ve heard all the stereotypes. We must be religious freaks who think that fossils are a trick perpetrated by Satan. We’re shut-in recluses whose kids never get out. Our kids can’t read. Our kids are hyper-geniuses. We hate mainstream society. We hate public school. We hate teachers. We hate. We hate. We hate. But my husband is a public school teacher, our house is full of fossils, and my kids could do an activity with other children everyday if I let them (I don’t). We don’t hate anything, other than the culture of schools, replete with testing, and the kid culture of snarkiness and anti-adultism. We like everything else just fine, thanks. We're homeschooling, and I don't care what you think.

People complain about homeschooling because they feel children aren’t getting educated “on schedule.” In our home, we actually don’t believe in a schedule. In fact, we don't have one at all. In America, we teach kids to read at 5, while Finland waits until children are 7. My nephew can add and subtract three-digit numbers, and he’s 6. My first grader can’t memorize 4 subtracted from 9, but he reads at a third-grade level. My 4-year-old son, on the other hand, doesn’t know his letters, and the ones he does know are only a few more than his precocious 2-year-old brother. My husband and I find none of these things highly remarkable or worrisome. Blaise, who's 6, is just wired to read early; August, who's 4, isn’t interested. But he’s allowed that disinterest here at home. That's why we homeschool.

We homeschool so my kids don’t have to sit at a bus stop at 6:30 a.m. in the dark, waiting for a ride that will wend them an hour through suburbs before it arrives at the school one mile from the house. We want to avoid the hour-long drama that’s school pickup, when my two other kids in the car are screaming to be let out at 3:30, which typically marks the hour my boys melt down. We don’t want to have to deal with a 7 p.m. bedtime and a rushed, hurried 5:30 a.m. wake up day after day. Instead, our kids go to bed at a healthier 9 p.m. or so, and wake up when they wake up — anywhere from 6:15 a.m. to 10 a.m. They wander out happy and rested, because their bodies gave them the sleep they needed. I also got the sleep I needed too, because I didn’t have to wake up at 5:15 a.m.

We’re also greedy. We want more of our kids. For the most part, children get off the bus around 3:30-4 p.m., and then, with small ones, go to bed around 7:30 p.m. That’s only three-and-half hours with your kids every evening, and it’s the sh*tty three hours, the ones where they’re tired and crabby and just want to lay down and relax. I want more from my children than that. I get to see my kids all day. We build science experiments together, read together, take hikes. I certainly see them at their worst. But I also, more than not, see them at their best: sharing with their brothers, giving up the iPad, cleaning up without being asked.

My boys also play with each other. Because they’ve never been to conventional school, they’ve never absorbed the idea that people should congregate in narrow age ranges. My 4 year old’s best friend is 6. My 6 year old plays with his 2-year-old brother as an equal. And when they meet other children, age isn’t an issue. They play with 10 year olds as easily as they play with kids their own age. I believe that’s valuable. They’re learning social skills from kids older than them, who have more practice at it, rather than kids on the same level. This, my husband and I feel, helps their social skills evolve more naturally and quickly than conventionally schooled children.

They also have space to be creative. If they don’t feel like doing math one day, they don’t do math. If they want to read for an hour, they read for an hour. My oldest son’s writing consists of dragon drawings with creative descriptions (including something called the “pelican dragon,” because it has a pouch to carry food). Today, my son did the letter "I" on his Hooked on Phonics, and this turned into “insect," which then morphed into making our own insects out of pipe cleaners, pom poms, and an old egg carton. We learned about the parts of insects, how many legs they have, etc. I followed my son's interests where they went — and progression likely could have happened in a conventional school in the course of a day.

Homeschooling is what works best for our family.

We aren’t as extreme as some homeschoolers. We don’t use a curriculum, for the most part (other than Hooked on Phonics for our 4 year old), but we do have a series of subjects we cover on a daily basis, and for my sons, those are usually not open for discussion. My 6 year old reads, (usually aloud with me), does math of some kind, writes, usually about the characteristics of a dragon he's drawn, and then we do science or social studies. I make my kids do school even when they might not want to, which some homeschoolers would see as unproductive.

Many people will disagree with my reasons for homeschooling. They’ll say they’re lazy, or sanctimonious, or that I just don’t want my precious babies around other kids. They’ll say the schools know best what kids need to learn and when, and moreover, schools can be creative. However, in the end, homeschooling is what works best for our family. My kids are happy staying home and learning. I’m happy teaching them (and with a dissertation sort of a degree in pedagogy, I’m qualified to do so). They seem to be learning. What more could I ask for?