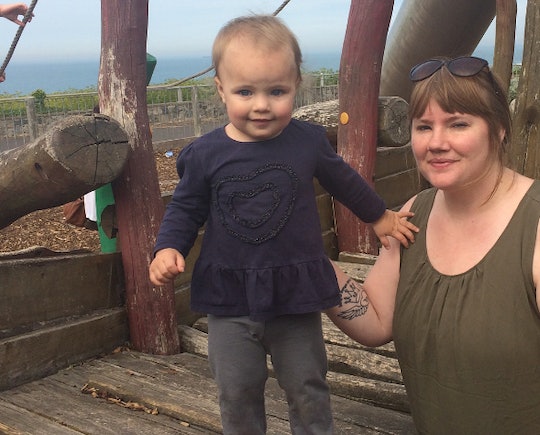 I Hope My Daughter Never Loses Her Sense Of Adventure

My daughter is nearly 2 years old. She is a wild child, and I absolutely love it. Most kids her age are open to exploring and are entertained by the smallest things, but from seeing the way some of the other toddlers in her weekly play group seem to approach other kids and toys with caution, I can tell that I have a fearless, intrepid, and spirited little lady who is quite gung-ho about free play on my hands. This doesn't shock me — it's one of the most thrilling parts of becoming a mother, and it's helped me bond with my daughter.

As my daughter's penchant for recklessness grows, I'm noticing that I'm actually not falling into the temptation of becoming a helicopter mom. Actually, I'm becoming quite the opposite. I consider it one of my biggest responsibilities to cultivate my child’s sense of wonder, and I often find myself stepping back to see what will happen.

Recently, I took my daughter down to the shore for a little walk. We live by the sea, so sometimes we'll go there for a beach day. If I wanted to be careful, I wouldn’t let my 21-month-old spot the water, but I’m not. I linger and let her explore, and when she’s heading straight for the sea, I don’t say “oops.” Instead, I stretch my own hands out while exclaiming, “Water!” When I don’t let her run right into the waves, she naturally protests, and it’s no easy task to carry a 30-pound kicking and screaming toddler back to the stroller a few hundred feet away. But I’m convinced it’s worth it, because it’s an opportunity to teach her about the value of boundaries.

When my tot would rather walk, I let her out of her stroller. My husband doesn't like it, because not only does it make our walk to wherever we’re going take way longer than it needs to, but it also makes getting back into the stroller a hassle. But I do it anyway, because I don't like unnecessarily confining my independent, curious, and vivacious little girl. Plus, I like encouraging her to be active.

My inconvenience isn’t such a bad thing if it benefits my daughter, because it shapes her into the person she will become.

I think of myself as an adventurer, and when I became a mom, one of the things I refused to eliminate from my new life was spontaneity. At first, I struggled to see how I could combine the two, but I’ve recently realized that my love for taking the long way home, so to speak, is mirrored in my child’s personality. I try to let my spontaneous nature inform my parenting. I remember someone telling me to integrate my kid into my life, instead of centering my whole life around my kid. Our little jaunts might require a bit more effort and energy these days, but I wouldn't call the additional work a mistake.

If I did, I would lose the joy of even one moment of seeing my daughter smile from ear to ear as the waves wash over her tiny toes. If I focus on what would inevitably be an inconvenience for me, her experience of the magnitude of the world as she explores new sidewalks or meadows would be erased. My inconvenience isn’t such a bad thing if it benefits my daughter, because it shapes her into the person she will become.

Of course, letting her wander over to a mud puddle or to the moody neighborhood cat might result in extra laundry or ruined clothes or a momentary fright. But eventually, she'll grow out of her fascination of puddles, she'll learn not to bother with the cat, and sooner or later, she won’t fuss so much when it’s time to get back in the stroller.

She’ll also eventually learn that there are days for swimming in the sea, and there are other days when we just dip our toes in. That’s one of the reasons I’m here: to teach her the difference between when it’s OK to run into an experience headfirst without looking back, and when it’s better to proceed with caution and simply dip your toes in. If we look like a pair of wild women in the process, then I can live with that.