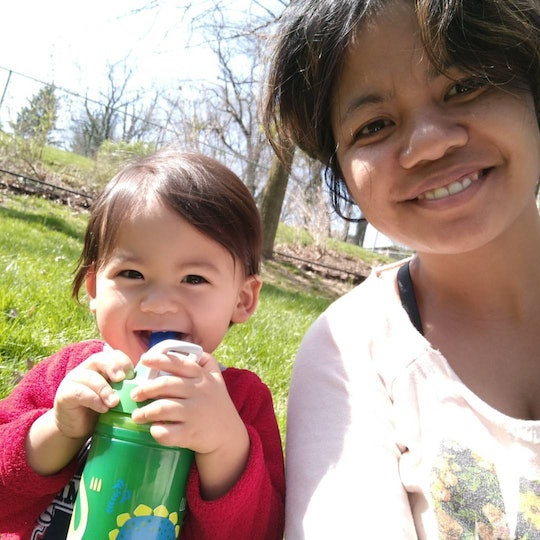 I Just Got My First Postpartum Period, But I'm Not Ready To Wean

When I became pregnant, one of the things I was most excited about was breastfeeding. I made an early decision to exclusively breastfeed because I knew it was highly beneficial for me and the baby, and I knew I had the necessary try-and-try-until-you-succeed attitude to stick to it. When I mentioned to a friend that I wanted to breastfeed, she said that one potential perk was that I would no longer get my period, due to the body inhibiting the release of hormones that would cause ovulation. The prospect of not having to deal with menstrual cramps, switching out tampons, or staining my underwear and sheets made me giddy with excitement. I couldn’t wait to breastfeed.

Despite a pretty difficult beginning, I was able to follow through with my plan. I exclusively breastfed my son Jasper for the first six months of his life. When I decided to start him off on solids, I mixed frozen breast milk with oatmeal cereal for his breakfast. When he got thirsty during the day, I let him drink frozen breast milk in a Camelback Eddy bottle so his dad could feed him when I was busy doing other things. I comfort-fed him before naps and bedtime, and again upon waking up in the morning before breakfast.

Then one day, after more than 13 months of being magically flow-free, I suddenly got my period. I was filled with dread. Was this the beginning of the end of my breastfeeding journey?, I immediately asked myself. What did I do wrong? After such a long and wonderful breastfeeding experience, why did my period suddenly decide to start again?

The logical part of my brain knew that this was a totally normal occurrence. I was far from the first woman to ever get her period while breastfeeding, and I knew it didn't necessarily mean that I had to stop. (While some women experience a temporary drop in supply after they get their periods, the supply usually picks up again after their hormones are restored to their normal levels.) But I also knew that my friends who had breastfed their children didn't get their periods for years. In fact, their periods only stopped when they'd stopped breastfeeding. I didn't know why I had suddenly gotten mine, and I knew I wasn't yet ready to wean my son.

I couldn't help but feel like I was somehow letting my kid down.

As I went to the store to buy a pack of sanitary pads, I mentally made a laundry list of things I could’ve done wrong that made my period come back. It could've been stress. We recently moved from the United States to Singapore, so we had to pack up and move in the span of less than a month. It was a crazy few weeks of planning, sorting, selling, giving away, packing, and figuring out how to transport our dog. Additionally, I also had a huge stash of frozen breast milk I suddenly had to use up instead of directly breastfeeding. Considering the circumstances, it didn't seem that far-fetched that either of those two reasons would cause Aunt Flo to come.

While chugging a bottle of beer – my go-to remedy for menstrual pains, which took me a while to remember since it’s been more than a year since I had to do it – I looked up things I could do to try and regain my menstruation-free bliss, as well as jump-start my milk supply, which I was convinced was dwindling. But I still couldn't help but feel like I was somehow letting my kid down.

After doing some Googling, I became a hundred percent sure of where I went wrong: I hadn't been breastfeeding frequently enough. Jasper hadn't been demanding boob juice straight from the source, because he wasn't exactly aware that was an option. I’d either been letting him drink breast milk, fruit juice, or water by bottle, or only breastfeeding him until he conks out to sleep (which doesn’t take that long, if he really is tired by the time I put him down).

I was also worried that my son would suddenly hate the taste of my milk because of my period. Yet the moment I drew him to my chest, he latched on instantly and drank with contentment, as if he was meant to be there. I was relieved. It felt like everything was back to normal.

It’s been a few days since my period came back. Today, there was barely any bleeding and zero menstrual cramps. I woke up this morning and immediately felt relieved. I had had my first postpartum period, and I'd survived.

I decided to take the return of my period as a sign to start anew. Now that we’re finally situated in our new home for the next few years, I can get back to breastfeeding regularly and maybe even pumping more to build up my frozen milk stash. Furthermore, should I get my period again in the next month or so, I know that it's not a sign that I'm failing as a mom. All I have to do is look at my son’s smiling face when I feed him to remind myself that I’m doing just fine.