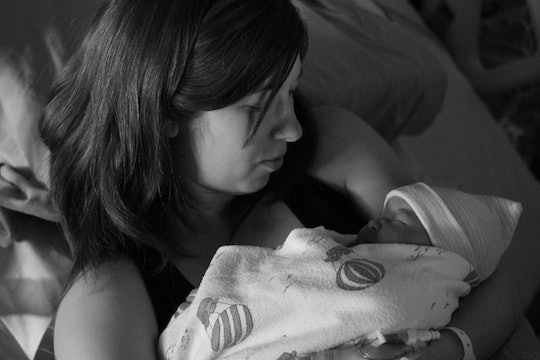 I don’t remember many of the nurses who filed in and out of the delivery room when I was in labor with my son. I was there for nearly 19 hours before giving birth, and there were multiple shifts turning over during the time I was in labor. Most were kind, my night nurse was amazingly attentive and excited for me, but there was one that stood out above the rest. I remember the moment she switched shifts and walked brusquely into the room, and the terrible hours that ensued after her arrival. Until I finally said enough and kicked my nurse out of the delivery room, and requested someone new.

I’ve now had three children, with completely different birth teams each time, and I know without a doubt that I made the right choice kicking that nurse out of the delivery room when my son was born. I have had nurses who were rockstars; women who I wanted to invite over to Thanksgiving dinner because by the end of giving birth I felt like they were family. I’ve had nurses who were a little rough with checking dilation and didn’t offer much conversation, but were always respectful and kind, even if they were simply doing their job and I was just another patient. It’s a demanding job, I get it.

However, no one held a candle to the nurse who I had to kick out of the delivery room. As soon as she walked into the room, I could feel the energy change. Maybe she was having a bad day. Maybe there was something else going on, but I was stuck with her for the next eight hours, and it was clear that I wasn’t going to have a good time. By this point in labor, my water had been broken and I was starting to have incredibly painful contractions. She put me on pitocin, despite my protests, saying I didn’t have a choice now that my water was broken. There was no explanation as to why, she simply went ahead and did it. Then when my contractions worsened she asked if I was getting an epidural. I told her no. I was aiming for a natural birth. I had been psyching myself up for birthing without an epidural for months now.

“You should get the epidural,” she told me. “How much longer do you think you’re going to make it like this?” she asked, knowing I couldn’t answer because I was riding the wave of another horrific contraction. I gripped the railing at the side of my bed while she watched me with indifference. When it was over, she asked me again.

I told her I wanted to keep trying to go on without an epidural. She clearly didn’t approve of my choice but suggested I take demerol, describing it as tylenol in my IV. I had never heard of it, and had no idea it was a powerful opiate that would make me completely lose control of my mind and body. Not only did it not help the pain, it made me less capable of dealing with the contractions. I couldn’t focus on my breathing. I could barely focus on my husband’s face next to me.

I waited until I was able to get my next dose of demerol, hoping that the second dose would work a little better. I was dying for some relief. But when I told her I needed more medication, she told me I couldn’t have it. I could have the epidural instead, but I wasn’t anywhere near the time to get another dose of demerol. I was. I was nearly an hour overdue for it. She didn’t care about my pain. She didn’t offer a shred of sympathy as I cried through contractions. She seemed annoyed by how difficult it was for me to give birth. Annoyed that I wasn’t out of there yet.

When she left the room after denying my request for medication, I asked my mother to go out and request a new nurse. I couldn’t take any more of her rude attitude or disregard for my feelings and pain. I understood that she had a job to do, but so did I, and I couldn’t labor like I needed to with her in the room. I wanted her out.

The new nurse came in cheerfully, overcompensating for the bad experience I had before her arrival. It was an unnecessary amount of exuberance — I didn’t need a birth cheerleader — but I was nonetheless grateful. All I wanted was people who I felt would listen to me and support me. I needed people I felt comfortable with. So I don’t regret kicking out that nurse, and if I could do it again I would do it sooner. It may be her job, but it’s my birth — and I get the final say in who stays and who goes.