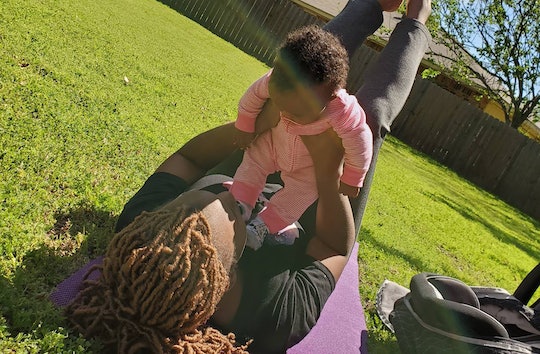 I Knew Having Kids Could Cost Me My Life, But I Did It Anyway

Ambreia has a 2-year-old son and has been trying for a second child for a year and a half. This is the twelfth installment of her Trying diary. You can read the previous entry here.

I wouldn't say I've become a pro yet (is anyone ever?), but I'm doing pretty good at this two kids thing.

She didn’t get the name “Grumpista” for nothing. It’s crazy that she smiles and laughs just as effortlessly as she cries. Sleep is much more accessible than it was in the early days — but I’m still inexplicably tired.

Still, the good moments give me the fuel to keep pushing through the exhaustion — like I had a choice, haha.

The most adorable thing that I've been able to watch over the last month is the development of my son's bond with his sister. She's way too young to reciprocate his attention, but from the moment he wakes to the moment he sleeps, he asks, “Where’s Whompista?”

Making sure he had a companion was a huge motivator for me to have another child. My husband's job could mean lots of moving for us in the future, and I figured a sibling could be one of several ways to make the experience go a little smoother. I’m prepared for a future with double the mischief if it means my kids will have shared memories and a loving relationship. My brother and I gave my mom hell — I'm visiting now and we still give her hell — so I’m expecting karma to kick in.

It was the first time I imagined a world where a second child was possible.

As I watch the kids grow in their relationship, I’ve been learning to shed the anxiety of traveling with them. In the early days, I would rather starve than take them to the grocery store because I was terrified of how I would handle both of them. I’ve come to terms with just how unrealistic that is. These days, we go everywhere. My new motto is "have double stroller, will travel."

Of all the things I’m doing great with, I couldn’t have prepared for how much a second kid would make me miss my family of origin. I miss my mom, brother, and extended family deeply. This raising a kid without a village stuff is no joke, especially when your partner works a demanding job.

I have a dream that one day I will do well enough that we can switch. My hub will be able to work from home and the kids will have as much access to him as they do to me. That same dream includes living closer to my family, even if only by two or three hundred miles.

But right now, I’m in reality where I work part-time with two kids full-time, with limited child care resources. My dreams keep me going.

A lot has changed in the last year. I’ve learned I’m so much stronger than I know, intensified my passion for birth work and reproductive justice, and started the emotional work necessary to be the best mom I can.

I can't believe it's been a freaking YEAR since I agreed to participate in the Trying project.

The time has zoomed by so fast.

It literally feels like yesterday I agreed to overshare. I'll never forget the New York City taxi ride where I first felt nauseous. I still don't know if it was motion sickness for the horrible zig-zag maneuvering of the taxi driver or first-trimester nausea and implantation.

But it was the first time I imagined a world where a second child was possible.

Bringing my children into the world could have literally cost me my life. I knew this, and made the choice to do it anyway.

My suspicions were heightened when I cried while watching Beyonce sing the Black national anthem on one Sunday morning a couple of weeks later.

They were confirmed when later that day I decide to head to the local Dollar Tree in my most exhausted clothes. I felt so many things… excitement, doubt, fear. Now I'm sitting here watching her sleep in the peaceful way only new babies do. And I can't help but wonder what I was so afraid of.

Motherhood, and the journey to get there, comes with so many feelings.

Each of my pregnancies and childbirths came with their own unique struggles. Bringing my children into the world could have literally cost me my life. I knew this, and made the choice to do it anyway.

I really hope that 1 day they are able to look back on the retelling of my journey to get them here and see how much sacrificial love was involved.

As crazy as it sounds, this is only the beginning. Giving birth to young black children is a challenging process, but raising those children is even more difficult. I am three years and two children into the mothering [while Black] game. I'd be lying if I said there weren't days that I question why I would subject any child to the hate in this world.

But then I look at their beautiful faces. And I think about the potential for them having an impact on the world — just like they've had an impact on me.

If I have learned nothing else over the last year, it is that I have to stop letting the fear of structural racism limit the love I have to give to my family.

So for the next 365 days, I will be in active pursuit of those lifestyle changes. I am one of many who have to make some of their most significant moments of character development while tending to young children.

Still, I don't doubt that all of us will be better for it.

More Like This
25 Baby Girl Names That Begin With D
Are You Leaking Amniotic Fluid Or Is It Normal Discharge? Experts Explain
Here's How To Keep Your C-Section Incision Dry
20 Bridgerton-Inspired Baby Names