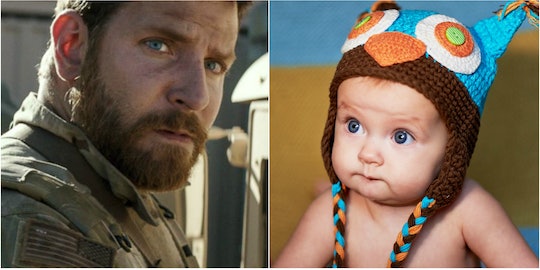 I Learned How To Hold A Baby From Bradley Cooper, & Guys, I Don't Think I'm Doing It Right

I’m a twenty-something-year-old woman who just recently held a baby for the first time. What can I say? I didn’t previously know a ton of people with babies, and how often do you encounter a baby in the wild? Hardly ever. And when the fateful moment arrived — when a baby was presented to me while everyone assured me I would be “totally fine, it’s easy, just do it like this” — I racked the deepest filing cabinets of my brain for some kind of buried folio of maternal instinct, but my mind immediately went to a short loop of Bradley Cooper cradling a fake baby in American Sniper.

American Sniper won an Oscar, was considered a Serious Film, and did pretty well at the box office, but the only thing any of us will remember is the fact that the producers used the most egregious fake baby in the history of fake movie babies. I can’t say for sure why anyone involved in the production felt this was something they could get away with. I will say that I enjoyed every single second of it because it looked so terrible. I’ve watched the YouTube clip of Bradley Cooper cradling that lifeless, haunted doll somewhere in the neighborhood of 12,000 times, which is likely why, in that crucial instant, it was the only piece of baby-related media I could recall with any clarity. Bradley Cooper knows how to hold a gun like nobody's business in that film, but have you seen the bit where he cradles his daughter?

So when this person asked if I wanted to hold her baby, I hesitated but ultimately said sure, I’d give it a whirl. I had seen American Sniper, the foremost cinematic authority in baby-holding, after all; how hard could it be?^

Here is everything I thought I learned about holding babies from American Sniper, followed by the sobering reality.

I am not good at holding babies, mostly because babies are not as unyielding as Bradley Cooper would have you believe.

The lesson American Sniper taught me: Babies are incredibly rigid.

The sobering reality: I will be the first to admit that, baby-wise, I’m pretty much clueless. Despite this lack of knowledge, however, I’ve always secretly believed I would be good at holding babies. I’m not sure what gave me this idea. Probably too much positive affirmation as a child.

I quickly learned that this was not the case. I am not good at holding babies, mostly because babies are not as unyielding as Bradley Cooper would have you believe. This baby in particular seemed to have the consistency of spilled pudding. Before I knew it, his face was in my shoulder and his legs were everywhere. An entire group of veteran baby holders looked on, smiling indulgently, as I attempted to wrangle him. I felt lied to, betrayed; American Sniper hadn’t prepared me for this.

The lesson American Sniper taught me: Don’t worry about the head. Let the head loll about unsupported.

The sobering reality: I knew the truth of this one already. What do you take me for, some kind of monster? Babies’ neck muscles are useless. You have to reinforce their teeny, tiny heads like they are the crumbling walls of a kingdom under siege. I may not know much about babies, but even I know they can’t hold their heads up for at least a few months, possibly multiple years. (My knowledge of developmental milestones is admittedly limited. When can they hold their heads up on their own? When do they start crawling? When do they learn to hold grudges and eat with a fork?)

The lesson American Sniper taught me: Babies weigh approximately nothing.

The sobering reality: Babies do, in fact, weigh something. Bradley Cooper may have been winging that thing around like it was made of gossamer, but real babies have their own gravitational pull. That’s not to say that this baby was exceptionally hefty. It’s just that I have dainty spaghetti arms and no upper arm strength, and anything heavier than a loaf of bread is liable to elicit an “Oof!” of effort.

The lesson American Sniper taught me: Babies hardly ever move of their own accord. To simulate life, wiggle the baby’s eerily stiff and immobile hand.

The sobering reality: Perhaps the baby in question was just really unruly, but within about two seconds he had delivered an impressive punch to my face. Just popped me one right on the jaw. Everyone had a good chuckle, and his mom said, “Oh, Derek!”

(Sidebar: the baby’s name was Derek, which frankly I found a little unsettling. Derek is not the name of a baby; Derek is the name of a man in his early twenties whose hobbies include Frisbee golf and Cheetos. But I suppose all Dereks have to start somewhere.)

The lesson American Sniper taught me: You should look extremely uncomfortable the entire time, as if you have never held a baby before in your life.

The sobering reality: This one wasn’t a problem. I was already doing this. We were good there. I can’t speak to whether or not this enhanced my baby-holding experience, but both Bradley Cooper and Sienna Miller were doing it in the movie, so I figured they knew something I didn’t.

The lesson American Sniper taught me: Idly pat the baby.

The sobering reality: Did you know this causes the baby to burp? I did, but still I was caught off-guard by the noxious gas he expelled directly into my face. It’s not always polite to ask “Why does your baby’s breath smell like a combination of sulfur and death?” but this woman was a friend of mine with a good sense of humor, and anyway, we can’t always control what comes out of our mouths. (Derek knows this just as well as I.) Again, there was laughter. Apparently it’s not only normal for babies to sometimes release toxic smog, but also relatively common knowledge, and none of you told me.

The lesson American Sniper taught me: There is only one way to hold a baby.

The sobering reality: There are multiple ways to hold a baby. As I was having difficulty gaining control in our current position, it was suggested that I try resting his head in the crook of my arm and supporting the torso and bottom from underneath. I was told this reminds the baby of his mother’s womb, which was information I didn’t entirely know what to do with. It was at this point that Derek could weather my incompetence no longer, and I don’t blame him in the slightest. He became distressed. I passed him along to someone who knew what they were doing.

Don’t let American Sniper fool you. Holding a baby isn’t easy. Holding a baby is a circus routine. You can't simply pass one back and forth to your wife while the two of you conduct expository conversations about America and the military industrial complex. You need to be focused, ready for anything, because a baby is not an inanimate object; a baby is the ready vessel of the apocalypse, packaged inside an adorable human infant with the tiniest feet you will ever see.