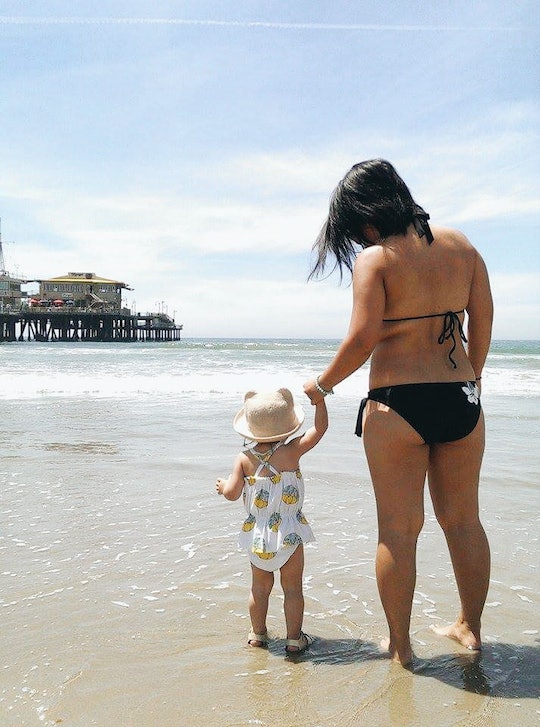 I Learned To Love My Body After Baby, But Not Because I’d Just Pushed A Tiny Human Out Of It

Having a kid comes at a daunting physical cost, one that changes your body and your life forever, yet I still learned to love my body after baby, thought not for the reasons you might think. Among the dozens of responses one writer solicited from Millennials against parenthood, he found that one of the most common brutally honest reasons Millennials don’t want to have kids is because of the physical toll it takes on a woman’s body. Fear of destroying my body is an argument I would have undoubtedly made prior to having my own kid. As a young woman with admittedly low pain tolerance and a petite frame, the prospect of bearing a child and sharing the physical space of my body was downright frightening, if not almost inconceivable. Not to mention the unglamorous changes a woman’s body undergoes after they pop out another human being.

Yet aside from the pain and the postpartum healing, the most dreadful thought associated with having a kid was how my physical appearance would change, and how difficult it may be to shed the weight of pregnancy. Up until very recently, I’ve been unable to elude the negative effects of body shaming, whether it stemmed directly ­— or indirectly — from peers and family or blatantly obvious images plastered on billboards and trendy Instagram accounts. However, there are things I learned about my physical capabilities that I could only learn through what seemed to be my "worst nightmare" of bearing a child. Motherhood brought me on an unexpected journey of falling in love with my own body.

Prior to having a kid, I treated my body with a sense of recklessness. I experimented with self-inflicted pain in my angst ridden pre-teen years. I gratuitously imbibed into the early hours of morning as a young adult to numb the confusion of unemployment and uncertainty. I allowed body shaming to take a foothold on my confidence and spent endless hours pinching parts of my body in disgust, fasting in depression for days, and relishing proudly in skinny comments. My body was mine to slowly destroy, whether or not I was aware of it.

The first year of motherhood was a blur of drastic changes that were almost unbearable. It felt like nature’s cruel joke to tear me open then demand every ounce of my being while robbing me of the restoration of sleep. At first, I felt like my body was merely a milk factory. My breasts hardened and swelled up in explosive pain as my milk production regulated, while the rest of my deflating skin sagged beneath me. Sitting down felt just as excruciating as standing up, but as a new mother I hardly ever had a choice as I tended to the colicky wails of a newborn. I thought surely this was the end of all things “me,” much less “my body” now that each limb, muscle, and breast operated on the whim of another tiny human.

I managed to hide beneath long cardigans and wide brimmed hats through the mild winter that followed the birth of my daughter. One early spring morning, as the rising temperatures prompted me to shed the extra layers of clothing, I found myself staring at my reflection in the bathroom mirror, pinching the loose tire of fat around my belly while the baby was asleep. I studied myself intently for the first time in six months, running my fingers across the newly formed white stripes along my torso and cupping my breasts, trying with great difficulty to recall what they used to look like and how they used to feel. Before my thoughts could turn bitter, I heard rustling and a soft cooing sound in the next room. The baby awoke, and as I peered into the bedroom and saw her gaze search for mine, the bitterness I began to feel toward my body had dissipated. Everything about my body had changed in unthinkable ways from the inside out, in ways that only made me better.

My body was no longer limited to appearance or pleasure, or even the satisfaction of self-destruction. Through motherhood, I learned my body went beyond the limitations I set for myself. I found that my postpartum body adapted, faster and more gracefully than I could predict. With soreness and hemorrhaging that seemed to never subside in the tender moments right after giving birth, I thought recovery would take months, perhaps years. Yet in the dizzying first months of sleepless nights and marathon nursing sessions, I eventually felt comfortable enough to sit without a soft pillow cushioning my bottom. My milk production regulated itself, and my breasts no longer felt like sacks of rocks weighing down on me.

My body did more than just adapt. My body met the fatiguing demands of caring for another human being. When my daughter was just 8 weeks old, she started to have difficulty latching on and swallowing milk when I breastfed her. I sought the advice of our pediatrician, who dismissively prescribed gas drops and told me to buy formula. Though I have nothing against formula, I so desperately wanted to continue a breastfeeding relationship with my daughter and knew in my heart it was possible. That evening, prepared for the heartbreak of rejection, I laid my fussy infant down beside me, stroked her fine hair to soothe her, and gently offered her a breast. She latched and suckled for 10 minutes, longer than she’d been nursing for weeks, until she fell soundly asleep cradled against my skin. My heart grew calm and I grew confident. My body was a source of nourishment and comfort, and for 14 months I was able to breastfeed with ease, much longer than originally I anticipated.

As a mother, I learned not to fight my body like I used to. I started to listen to my body, as if every day was a fight-or-flight situation (which, it kind of is when raising little ones). I began to push the limits when I could and scale back when I needed to, and as a result, my body thrived. I can carry four heavy grocery bags and a squirming child up a flight of stairs without breaking the eggs. I can tread through sand and crashing waves for hours, chasing my curious toddler as she runs furiously to catch the rays of sun. I can sense when fatigue and sickness set in, and rest at ease in knowing I’ll be powerful when I rise the next day. It’s been two years since those painfully exhausting and physically taxing nights of new motherhood, and in enduring those moments, I know now that I am physically and mentally stronger than I ever imagined I could be.

The truth is, yes, having a kid takes a great physical toll on a woman’s body. It is a toll that comes with great responsibility, but it’s immensely rewarding. I am never going to physically look like I did before I had a kid. I’m always going to sport stretch marks and my breasts will droop a little without a push-up bra. In my eyes, with all the things I learned about my body through childbearing, I look and feel exponentially better. My previous fears of unimaginable pain and the stubborn extra weight seem petty in hindsight. I love my postpartum body, from each mark indicative of the life I bore to my widened hips that jut out just enough for a toddler to rest on comfortably.

I love knowing that my body will not be destroyed if I were to bear another child; rather, it would adapt effortlessly. I appreciate that motherhood taught me to share the nourishment my body is able to provide. By the same token, motherhood taught me to cherish my body and take the necessary measurements to take back my body as “mine,” and to care for it in order to do everything I am capable of. Having a kid made me love my body for more than my appearance, but also for the many ways it gives me, and others, life.

More Like This
Ashley Graham On The “Fun, Organized Chaos” Of Raising Twins
34 Instagram Captions Perfect For Preschool Graduation Photos
24 Beautiful Baby Names With The Same Vibe As Mila
18 Baby Names To Use If You Like The Name Evelyn