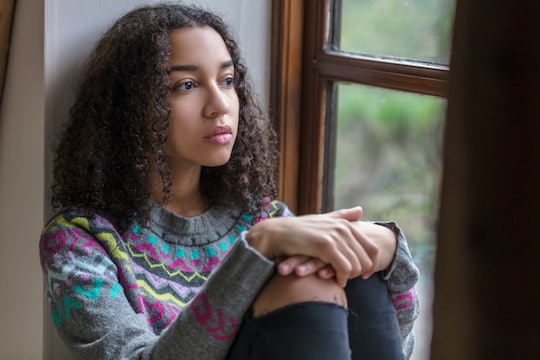 I wasn’t brought up in a super religious household. Truthfully, my grandparents were the only ones to find a way to mention “the Lord's plan” during our conversations. At the same time, because I was born as a Southern Black woman, religion and spirituality felt engrained in my identity. Being a Christian wasn’t a choice, it felt like more of an identity-based assumption, and a piece of me that I let go when I left the church, years before becoming a mom.

Many of my childhood memories include going to church, Bible studies, and baptisms. The more time I talk with my friends, the clearer it because that my experience was the norm. You can do whatever you wanted during the week, but come the weekend, you’re expected to be at God’s house.

The opportunity for fellowship and community that the church gave was great. My grandmother's circle of friends became my extended family. But interactions with the church eventually brought other feelings: Conviction.

By mid-adolescence I had been so indoctrinated into the world of religion that I carried a heavy block of shame on my shoulders. It felt like everything about me was wrong. My budding sexuality, my interest in boys, and my headstrong independence were all met with criticism and guilt.

I hated the way religion made me feel but I couldn't imagine a world outside of it. It was such a key component of my culture I expected those traditions to exist with me into the afterlife.

But when I found myself moments away from committing to something that in retrospect I would view as cult-like in my college years, it became clear that I needed to shed those traditions for myself and my future family.

Now, nearly five years later I am a mother of a 2-year-old and expecting a second. There is not a day that goes by that I regret my decision to leave the church before having children.

The Bible study group that I attended during college motivated me to leave because it presented me with the world of religion behind a friendly face. They transformed voluntary attendance into an obligation. This was particularly problematic for me as an involved full-time student in several campus leadership roles.

I can remember thinking that I never wanted my children to be in a position that they are so ashamed of their life decisions that they think their only hope for forgiveness is opening up to a room full of strangers about themselves.

However, the most harmful tactic was their strategic use of guilt as a necessity for spiritual growth. They took the concept of God’s forgiveness and added the contingency of reading our sins before 10 to 20 of our peers. Growing up I was taught that the only one who I need to ask forgiveness from was God.

I didn’t see how telling them my pain would help me, particularly without the added option of life context. And I can remember thinking that I never wanted my children to be in a position that they are so ashamed of their life decisions that they think their only hope for forgiveness is opening up to a room full of strangers about themselves.

My experience with this group was on the mild end of extreme. But it did cause me to think a lot about the messages that many of our churches and religious organizations send to ourselves and our children. We’re primed for shame and public humiliation from birth — especially as women.

And that reflection was enough for me to decide that organized religion didn't have a place in my personal value system.

I'm not an atheist. I do not believe religion is inherently bad. But I do believe that the social pressure that accompanies religious groupthink can lead to some very negative consequences.

I had experienced many of those emotional consequences first-hand and I was not willing to transmit those theories to my future children.

It took years for me to get past the feelings of discomfort associated with that group. But a couple years later I found outlets, like the Unitarian Universalist Church that showed me it is possible for a body of individuals to join in worship and celebration without ostracizing people on the base of race, gender, or other identity factors.

And truthfully, attending services with that church restored my faith in religion and intensified my quest towards spirituality.

We’re primed for shame and public humiliation from birth — especially as women.

I was comforted knowing that the Unitarian Universalist Church offered a place that found ways to incorporate children in the service. This was a large contrast from the "children should be seen and not heard" perspective I had been exposed to while growing up.

I enjoyed both the political advocacy and the commitment to inclusion shown by my local Unitarian Universalist Church.

But in the end, it became clear that committing to any church wasn't in my future. I enjoy the freedom that comes with attending a variety of religious services and I want to set an example for my children that they can do the same.

In my case, the rejection of the church and the accompanying rituals was not a rejection of spirituality. I see my decision of having left the church as one motivated by the desire to develop my own concept of the best way to connect to the higher power. Above all, I saw leaving the church as an important step to protect my children from many of the moral conflicts I faced as a child. And if their emotional security damns me to an eternity in hell, so be it.