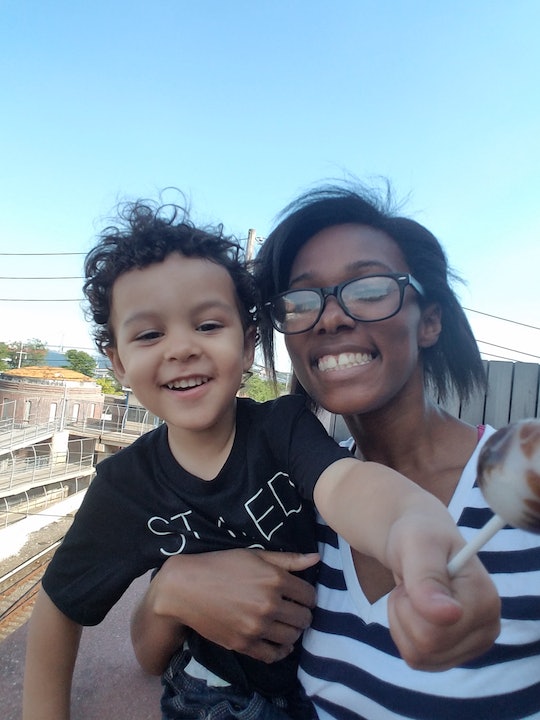 I Let My Fashion-Loving Toddler Dress Me

I was getting ready for a rare night out when my 3-year-old son stopped me. At first, I figured it was because he didn't want me to leave, but he had another item on his agenda.

“No, Mommy, not the black shirt. Wear the white shirt.” he said, handing me the T-shirt on the bed.

“I think you’re right," I said. "Thanks, buddy.” I smiled at him and changed shirts.

That wasn’t the first time my son has made a suggestion about my outfit. He may only be 3 years old, but he has a pretty good sense of what looks good on me. I often take him shopping with me, so I guess he’s just learned how to develop a sense of style from having to sit in his stroller while I comb through racks of clothing at Target. If I’m unsure, I’ll often turn to him for a suggestion. While I might not always take it, I do carefully consider it before I make a decision. I guess he figures that since I pick out his clothes all the time, he should be able to pick out my clothes sometimes too. And you know what? He's not that bad at it.

I remember when I first realized that my son had a strong eye for fashion. Once, I was in Target looking for some new tops, and I counted many out because they were too old, too young or just didn’t go with my personal style. Finally, I found one that I liked. I held it up to myself and turned to him.

“Aww, look at you!” he said with a smile. I laughed and threw the shirt on top of the stroller. Obviously, if my little dude thought it looked good, it must have looked good. When I brought the shirt home and put it with my other clothes, I realized that he was right. It fit in perfectly with my wardrobe.

I don’t know where my son's gift came from, but I’m not complaining. His insight into my sartorial choices has been helpful on a number of occasions. Sometimes, it’s as simple as just asking him if I should get a pink shirt of a green shirt. He’s got an eye for color, so he will more often than not steer me in the direction of a bright color. He is not as into stripes and plaids as I am, but he doesn’t seem to mind that I like them and try to wear them when I can.

When people complimented me on the dress, I would proudly tell them that my son picked it out.

Last summer, I was shopping for maxi dresses, because I could kneel or sit on the ground with him without flashing the people on the playground. There were so many options that I was overwhelmed. I held up a dress to him and he scrunched up his nose.

“No, Mommy, no boopie.” he said, meaning that the dress would make it difficult for him to breastfeed. Of course, sometimes his decisions are purely for his own selfish reasons.

I eventually picked out a plain black maxi dress with thin straps. He loved it so much that he wanted me to wear it every single day. Once, his little eyes filled with tears when I told him that it was just too hot to wear the dress. I had to wear it the next day. When people complimented me on the dress, I would proudly tell them that my son picked it out.

As much as my son loves being my personal stylist, I enjoy dressing him too. When I was pregnant and I found out that I was having a boy, I was initially disappointed, because I didn’t think I’d have as much fun dressing a little boy as a girl. While boys' fashion options aren't quite as extensive as they are for girls, I still make sure he's as cool-looking as possible.

When he gets a little older, I’m going to allow my son to pick out his own clothes — not because I'm tired of dressing him, but because I’m curious to see what he comes up with! And who knows, maybe he will go into the fashion industry one day. Then when people ask how he got started, he can say that he started picking out his mother’s clothing when he was a toddler.