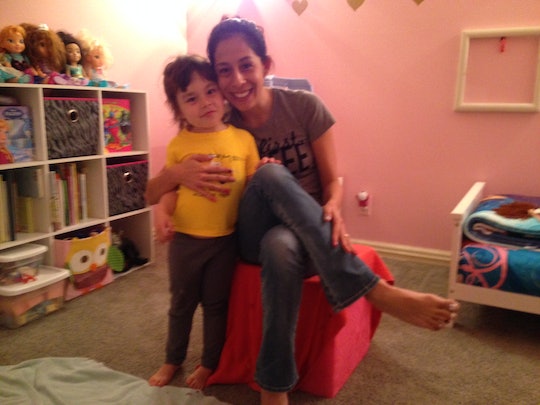 I Let My Daughter Give Me A Manicure & Pedicure

Now that I'm a mom, getting a manicure and pedicure falls under the list of things I still try to make time to do for myself. Before becoming a mom, I would get my nails done at least twice a month. But after I had kids, I often neglected my nails or canceled appointments because I felt guilty about it. It took me six months after my first daughter was born before before I finally got back into a routine of getting my nails done at least once a month, and it provided me with some much-needed Me Time.

Now I have a 4-year-old and a 2-year-old, and I still find it difficult to squeeze in mani-pedi appointments. But I still try to get my nails done once a month if possible. So when I began to hint at my daughter that I needed a manicure, and she asked if I could paint her nails, not only did I say yes, but I also told her she could paint mine. She was totally on board.

My girls have their own set of kid-friendly nail polishes they can use, with shades ranging from Elsa icy blue to Rapunzel purple. But they also know that I have my own set of nail polish that I keep in a makeup box in my room. Anything off-limits is always enticing, and my girls always want to use what I keep in the box. But since my daughter was giving me a DIY manicure and pedicure, I told her to grab the makeup box and use anything she wanted, including the nail file, buffer, and hand cream. This was going to be a legit manicure and pedicure.

First, we set up the manicure and pedicure station. I suggested the bathroom, since that way she could get nail polish on the carpet. But my little manicurist had other plans. She told me that she wanted to paint my nails in her room, so I laid out some towels on the floor and watched as my daughter lugged the nail polishes to the room and set up her nail station. Then she told me to sit down.

I expected that I would have to direct my daughter to give her mom a proper mani-pedi, but my 4-year-old seemed to have it all under control. She started by pretending to use the nail clippers (nail clippers are off-limits to my girls).

She “clipped” my toenails and then my fingernails, before she moved on to filing and running the little brush over my nails. For some reason she thought this whole procedure was really funny, because she kept giggling when she swept the brush over my nails. When I asked her what was so funny, she said brushing nails was silly, which I suppose it is.

She then put some cream on my feet and started patting it on my skin. When I asked her if she could rub it all over my feet, she looked at me as if I had just asked her to toss out all her toys. “I don’t want to do that," she said. Apparently, not even my daughter likes touching my feet.

I then told my daughter she could use any nail polishes from the box or from her own nail polish stash to paint my nails. My only request was that she stick to two colors. Of course, I ended up with multi-colored fingernails, but she was really into painting my nails and taking her time to look for just the right color, so I just let her do her thing.

I tried to make small talk the way I normally do when I’m getting a manicure. "How was your day?" I asked. "Are you having a good weekend?" And like most professional manicurists, her answers were monosyllabic: "Fine." "Good." She was really focused on her work. Her favorite part was applying the glitter: she would paint some on, lean back to inspect her work, then apply more. She loved it.

After she finished painting my nails, she (reluctantly) moved on to my feet. I asked her if she wanted to use the toe inserts and she said OK, but after she put it on she said she didn't like it and asked me to take it off.

"Your baby toe is tiny," she said as she painted my toenails.

"Why did you pick the red?," I asked her, pointing to the dark red shade she'd started using.

"I like the way it looks with your skin."

When she was finished, I told her how much I loved, loved, loved my rainbow manicure and pedicure, and how much I admired her creativity. She looked really happy.

Having freshly painted nails makes me feel more put together, and having that hour every month to get pampered is something I look forward to. I never considered that my daughter would want to be the one to spoil me. Before letting my daughter give me a mani-pedi, I envisioned nail polish on the carpet or polish all over my hands, but in the end I had nothing to worry about. My daughter did a great job and she really did make me feel special. I enjoyed spending that quality time with her.