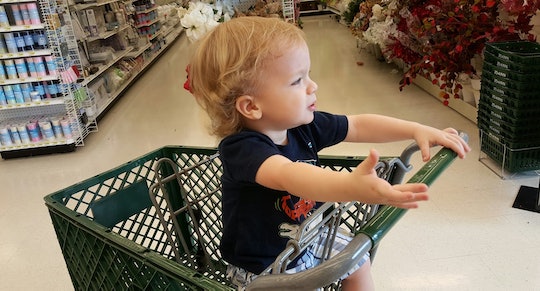 I Let My Kid Throw A Tantrum, & This Is How Strangers Reacted To Me

Something about the fact that I've been pregnant and given birth to a human being has shifted my embarrassment threshold. When I was younger, I worried constantly about what people thought of me. I never wanted to be embarrassed. Now that I'm older and a mom, there are few things in this world actually capable of making my face redden, because TBH, after you’ve “snarted” (sneezed and farted) in your OB-GYN’s face, there’s not much dignity left to salvage. In a way, I found my increased tolerance for all things cringe-worthy to be liberating in my late 20s. No longer do I worry if yoga pants count as real pants when I venture out in public; I just rock it and embrace my newfound apathy. Plain and simple, I don't usually care how other people felt about my appearance or blasé attitude. If they want to judge me, that's on them.

But there is something profoundly different about the feeling you get when strangers judge you for how you choose to parent your child. When someone throws you major shade for having a complicated order in the Starbucks drive-thru, you can just roll your eyes and move on. But when someone looks at you with sheer and utter disgust in their eyes because of how your child is behaving, it slices straight to your core. For me, it feels like they’re not only passing judgment on my child, but they’re also implying I’m an unfit, terrible mother.

I would risk life and limb to shield my son from painful experiences, but I find myself helpless in those moments of criticism.

I’m not sure when or where it began, but there’s a misguided notion out in the world that women and men with kids are “doing something wrong” if they let their children carry on in public. For some reason, we forget that kids are, well, kids, and they'll do whatever they damn well please, whether or not it embarrasses the crap out of mom and dad. Toddlers need to tantrum. It’s not pretty, but it’s how they communicate feelings and emotions.

So I decided that on one particular outing, I’d let my son’s tantrum run free. I wouldn’t try to calm or placate him if he was freaking out because he couldn’t have something he wanted. The want piece of this experiment was really important. Obviously, if my son was in danger, I wouldn't leave him to fend for himself, but if he was carrying on because he couldn't have something and he wasn't at risk of physical harm, then I was OK letting whatever happened, happen. I was curious to see how the women and men around me would react, not just to Max, but to both of us.

I knew my toddler would get a free pass because he’s an adorable kid with a million-watt smile, but would I?

We were in an arts and crafts store, recently, and I was keeping an eye on the invisible timer in my head, trying to get my shopping done before his inevitable meltdown. But then he saw a Mickey Mouse display and all bets were off. Being the cruel mother I am, I wouldn’t let him eat the plastic object. To him, this was the worst thing that had ever happened. He wailed like I was trying to sever his limb and dropped to the ground like a sack of bricks.

I felt that familiar flush of embarrassment and panic wash over me. Every time I tried to pick my screaming son up, he went the wet-noodle route, going completely limp. I wanted to scoop him up and run, but I knew I couldn’t. I was determined to see this experiment through. As my son showed no signs of relenting, I began to notice the looks we were attracting. There were a lot of people around, and they all seemed to have an opinion.

I knew he wasn’t in mortal danger, though his screaming might have had you believing otherwise. He just wasn’t getting what he wanted. I thought that, maybe, by some stroke of luck, people would notice that too. I hoped they’d recognize that I was teaching my son the difference between want and need, and I hoped maybe they’d applaud me for that.

Oh, how wrong I was.

Two women passed by us, not bothering to give us space. One said to the other, “You’d think she’d at least move out of the way.” And the other just scoffed and rolled her eyes. One woman just stood there until I looked at her with a questioning face. She said in an irritated tone, “I’m trying to get to the fabric behind you.” I apologized and finally managed to get my son back into the shopping cart. As I wheeled him away from the Mickey Mouse display, he cried even harder. One older lady walking past us spoke into her cell phone, “Sorry I can’t hear you. There’s some kid crying.”

I was conflicted. On one hand, I felt humiliated and ashamed. To these bystanders, I was clearly doing something wrong: I couldn’t even handle my toddler’s tantrum. Yet, on the other hand, I was kind of pissed off. Every child has a tantrum at some point, and every parent reaches a point of helplessness. So why should I be shamed by anyone else for dealing with one of life’s challenges? It’s not like I wanted my son to be in full-meltdown mode, trust me, but I couldn’t really stop it either. This mixture of feeling embarrassed by and resentful of these judging looks and comments was overwhelming.

I pushed the cart and my screaming toddler into a side aisle to try and collect myself, and then the most wonderful thing happened. I felt a hand on my shoulder. A woman, maybe in her 40s, was standing behind me with a smile on her face. She told me she was a mother, too, and had been in my shoes many times with her three children. I told her she was the first person who had actually offered kindness instead of judgment. She shook her head and said:

Isn’t that a shame? Parenting is hard work and sometimes we need to hear we’re doing a good job — even if it comes from a stranger.

I was speechless. In an instant this fellow mother broke through the crumbling wall I was attempting to put up and made me realize everything would be alright.

Just like that, my faith in humanity, and in myself, had been restored. In a sea of negativity, all it took was one person to turn my day around. This woman, a seasoned vet of toddler wars, saw the big picture and reminded me of the adage, “This too shall pass.” It reminded me that the next time I'm out in public, I can be that kind stranger. You never know whose day you may turn around. It may be someone like me or even someone who's one negative comment away from a breakdown.

Am I A Horrible Mother For Letting My Son Cry?

I’d like to say that this experience freed me from the social expectations of being a put-together parent with a perfectly happy toddler. I’d like to say that, but I know in my heart of hearts that his next meltdown will still cause my face to redden with embarrassment and panic. I dug deep and wanted to find what it was that held me back from not caring about judgmental looks. I don’t want to admit it, but I think the root of my problem lies in the fact that I want to be Superwoman.

I want to have it all and do it all without breaking a sweat. But I'm realizing that I can't. And that's OK. I’m downright envious of — and mystified by — the women with the perfect hair and makeup, wearing non-yoga pants with their British-level polite kids. What demon did they make a deal with to have that happen? Can’t I be Superwoman, too? But I can't. That picture that I've painted in my head isn't real. (And if it is, it's not the norm.)

So the next time my son’s world is ending because he can’t have something he wants, I’ll count to 10 — not for him, but for me.