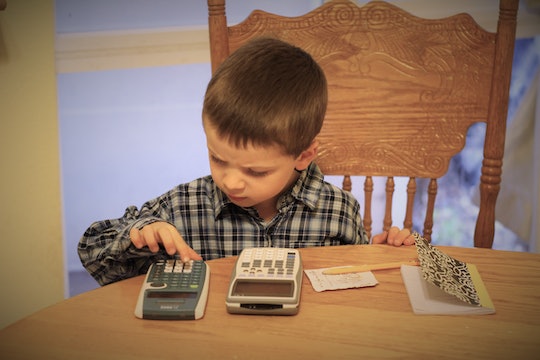 I Let My Son Control Our Budget For A Week, & This Is What Happened

I have lived strictly by a budget since I first moved out of my parents’ house when I was 18. Doing so allowed me to graduate college with zero debt and finance my dream wedding and a honeymoon without going broke. It's helped me survive debt-free throughout my adult life, even when I was working crappy part-time retail jobs and hardly making any money. I always made my budget a priority, and even though it hasn’t always been fun, it has always been worth it.

Since financial responsibility is something I take very seriously, it is important to me that I pass on my savvy penny-pinching skills to my children. I didn’t grow up in a household where I was taught about money. My mother never showed me how she balanced the monthly budget and my dad, although he was always talking money with me, is a Ron Swanson sort of guy who advises me to buy gold rather than trust banks. I had to figure things out on my own, and I don’t want that for my kids. Setting them up with the knowledge to succeed financially is one of the highest priorities I have as a parent.

Even though my son is a little young (on the cusp of 5, ahem), I decided to give him a crash course in budgeting for a week. We arrived at the end of a month with a little money to spare and no dire needs, so I decided to let my preschooler decide how we should manage the money for the remainder.

I sat him down and let him be my partner for the monthly budget meeting, and lay some super adult responsibility on his bony little shoulders. Here's how he (and the rest of us) fared.

Each month, I make a point to sit down with my husband and go over the budget I've crafted for the upcoming month. Since I am primarily the one who controls our money and approves all expenses, I like to make sure that he has a say in where money should be allocated each month.

For my son’s week at the budgeting helm, I let him sit down with me and plan the weekly budget. I explained that a budget was a list that shows us how to spend our money based on what we want and need. Even at its most basic level, it seemed a little high concept for a preschooler, but he understood more than I expected. I asked him what sort of things he thought we needed money for so we could make our list and his answers astounded me.

He, first and foremost, needed a new vacuum. My son is obsessed with vacuums (weird, I know) and if he was in control of the money, he wanted a new vacuum immediately. Ignoring the fact that he has five vacuums sitting in his room right now, he told me that the one he uses most often “sounds weird” and “might break, you never know.” Also, he informed me that we should get a new mop and a bucket.

Then he made a super reasonable grocery list based on things we were running low on: broccoli, cheese, salad (even though he NEVER eats it), juice, and of course some raspberry licorice. Priorities.

After we went through and figured out what sort of things we needed in our budget, we had to decide how much to spend on each item. I asked him how much he thought we needed for groceries, cleaning supplies, and gas. According to him, everything was about $59. Food? $59. Gas? $59. New vacuum? $59. Treehouse chainsaw? $59. I suggested the new vacuum might be a little out of our budget. “So like, $159?” he asked. Actually, yeah, that’s pretty close.

He was a little out of his element when it came to the math portion of the budget, which is understandable since he’s still learning to identify numbers. (Except for 59, because he has that one down). When I explained to him how much it actually cost to buy food for the week usually (about $100-$125), he was shocked.

Like I said, numbers aren’t his thing yet. Even so, it was a good experience to have some real talk about money with him. So often, we don’t talk about the real price of everything, even if he does see me do the budget. He may not understand exactly how the numbers work out, but at least he was able to see for the first time how money relates to our everyday lives.

One of the ways we try to control our spending is to have separate cash envelopes for each of our expense categories. It stops us from overspending and gives a more serious cap on our expenses than when we use a debit card.

My son has always seen us divvy up the envelopes, and had never shown much interest in them. He understands what cash is, and is always thrilled when his grandparents send him a couple dollars in random holiday cards to spend at the dollar store, but he never mentions cash otherwise.

However, when I told him he'd get to put the money in the envelopes, he was thrilled. He was very careful to keep each bill straight and facing the same way, just as he's seen me do. It made me realize that he's watching more carefully than I ever would have assumed. Giving him this responsibility impacted him in a big way, and I could tell that he wanted to get this budget week right. It was a proud moment to see that he values the way we handle money, and respects it like my husband and I.

Once I'd helped him flesh out the grocery list and meal plan, we went shopping. As we went through the aisles and got all the items on the list, he occasionally wanted something extra, which is pretty normal. Grocery stores like to put tempting kids items on the endcaps. He normally asks and accepts whatever answer I give him (usually “no”), but this time I explained to him how buying extra effects the budget.

I told him that there was room in the budget for a little bit of extra food, but not much, and if we saved our money by sticking to the list, we would be able to spend the extra money on something else like a trip to the ice-cream shop or dinner at a restaurant. He started to understand that the budget was a game of give-and-take that helped us determine our priorities, and he knew his priorities ...

He didn’t ask for anything else when we were in the store, and was strict in keeping me to our written list (no special yogurts for his sister or fancy cheese for his mama). I wondered if my frugality had rubbed off on him, but saving wasn’t his prerogative. His prerogative was ice cream from the ice-cream shop. We went out for ice cream after our grocery shopping trip, where he dutifully handed the money to the cashier, very proud of his restraint and responsibility.

When we arrived home, he started taking the money out of the grocery envelope. I asked him what he was doing, and he said he wanted to count it, so I helped him determine what we had left for the week. What he really wanted to know was if there was enough left for MORE ice cream. So we went out for ice cream the next day. And the next day. It’s a good life to be 4 years old and in charge of the food money.

Even though it was a bit excessive to get ice cream every day, it was a nice way to let him enjoy his newfound responsibility. He was able to indulge a little because he had saved during grocery day. Having a budget is all about balancing the times you need to scrimp and the times you want to splurge, and I could see, even in the littlest way, that my son was starting to understand that. At the very least, he knew what to do in order to get ice cream.

Day 6: The Importance of Saving

After three days of splurging on ice-cream trips, I sat him down to talk about how we don’t always need to spend all the money in the envelopes. I told him that sometimes we save the extra money we have so we can buy bigger things (yes, bigger than ice cream) after we save our money for a while.

We talked about the kinds of things we wanted to save our money for, like trips to see new places and go camping, or new vacuums, or supplies to build a treehouse. He'd been saving his chore money for a while in a big plastic cylinder for a treehouse, but recently his interest had been waning. It’s hard for a preschooler to not see results right away.

However, after managing the budget and better understanding the value of saving, he was reinvigorated. Money was starting to have more meaning to him. He saw that saving money for his treehouse project was a worthy goal. Giving him the passion to set his sights on bigger goals to work towards with money was one of the most rewarding moments of the week.

At the end of the week, we looked back over the budget and counted out the money in the envelopes to see how we ended our month. We hadn’t overspent in any of the categories, and we had a little money left over in each of the envelopes. After we counted it out, I asked him what we should do with the money, since he was still in control of the budget.

I figured he would want to go out and immediately buy whatever vacuum fit within our budget (since I had mentioned that we might be able to get a vacuum if we had the money leftover), but instead he decided to add the leftover money to his savings jar for his treehouse.

I was so proud of him for deciding to choose to save that I planned a weekend trip for us to buy a chainsaw (weird, I know) so he would have his first big tool for the treehouse project. He had really impressed me with his sense of responsibility and dedication to keeping the budget in tact throughout the week.

How Did My Budgeting Boy Do?

In the end, I was shocked by how well my son was able to handle money and a budget. From creating the budget to taking the responsibility of handling money seriously, he took his week as Budget Chief in stride. He understood a lot more about budgeting than I expected him to, which was a proud moment for me as his mom. I make a point to talk about the budget around the kids, and have the Budget Summit with my husband while they're around, and it was reassuring to see that was actually working.

However, this week also opened my eyes to how easy it would be to make the same sort of mistake my parents made with me by not talking about personal finance enough. My mother is good with money and budgeting, but she never took the time to show me, probably because she didn’t think it was something I'd understand or care about. I completely underestimated my son’s ability to grasp the concept of budgeting, and thankfully learned through this experiment that he can rise to the occasion when it comes to the tough stuff.