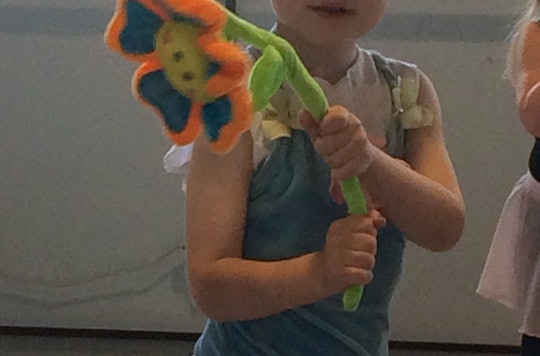 I Let My Son Wear A Dress To School, And It Was The Hardest Thing I’ve Done As His Mom

If I had to pick one quote to sum up my experiences as a mother, it’d be this quote by Elizabeth Stone: “Making the decision to have a child — it is momentous. It is to decide forever to have your heart go walking around outside your body. ” And as cliché as it is, there is nothing in this world more painful than seeing your kid hurt. I fight the urge to wrap my kids in bubble wrap and slap a couple dozen “handle with care” stickers on them daily. I want them to be themselves, but I want them to be protected. I want them to run free, but I also want to be steps behind, safety net in hand, in case this world is too overwhelming. Like last year, for instance, when I sent my son off to school in a dress.

He had just turned 4, and he liked “boy stuff” and “girl stuff” equally. (I reject the whole idea of gendered toys, but the world does not always agree with me on this.) He loved cars and ballet, princesses and superheroes, baby dolls and trains. When he wanted to play dress-up, he often chose the princess dresses over the construction worker vest. I can’t say I blame him: one is a brightly colored piece of clothing, the other is a sparkly, twirly, multi-textured, ruffle-y concoction. Given the chance, I’d make the same choice.

Around the house, he always wore “dresses” — old t-shirts of mine long enough to be dresses on his small frame. He did this from about the age of 2 ½ on. Now, at 5, he still wears my shirts and nightgowns as pajamas regardless of how girly or frilly they are. A few nerve-wracking times, he wore his favorite dress out of the house. It was a hand-me-down intended for his sister, but it fit him. It had little cartoon kitties wearing berets and bows. It had cute pink piping. He just loved that dress.

I prepared myself for the fact that he might be gender-nonconforming. I mean, I guess he already was, but I was prepared for him to want to be a girl in a way that went beyond dressing up as a princess. I wondered: Did he feel like a girl on the inside? Did he feel more comfortable dressing as a girl? Was he just experimenting? And a large part of me wanted to ask him; I wanted to talk it to death. But I didn’t want him to feel my stress. So instead of laying it all out, I hoped these things would reveal themselves in time. I talked it out with my partner, who heard my fears, questions, and concerns, and calmly reminded me that there are no hard-and-fast rules we had to follow as parents, and that we’d be able to take things as they came.

Letting him out of the house in a dress set a precedent: dresses were now something he wore. Not just at bed. Not just at play. But while checking out books from the library and sipping a vanilla milk at our coffee shop.

I worried how other people would react, and how that, in turn, would affect him. Personally, I didn’t care what he wore. I wanted him to be happy. So I prepared him for what people might say, just in case. “If you wear a dress,” I said, “it’s possible people are going to wonder if you are a girl or a boy. Or they might just think you’re a girl. Are you OK with that?” He was fine with it, telling me, “I’ll just tell them I’m a boy.” Things that were so fraught and difficult for me were so simple for him. Yes, he’s a boy in a dress. Whatever. As long as he was with me, I could protect him. If anyone gave him any crap about his dress, I could stand up for him. I could model tolerance and confidence and unconditional support.

But then there came a day when he decided to wear a dress to preschool. It wasn’t really a dress. It was a white maternity blouse with lace trim that looked like an old-fashioned wedding gown when he wore it. And he really wanted to wear it.

I compromised: he wore the dress, but it was chilly out, so he had to wear some pants underneath. And, luckily, the shirt was slightly sheer so he had to wear an undershirt. I told him he might change his mind about wearing it, because people might react, and that was fine. He could just take it off and put it in his backpack. I packed him a sweatshirt just in case. I had made plans and contingencies, because that’s what women with kids do: always trying to plan for what might happen even when it’s impossible to know. I had two important jobs that day: to protect his heart as best as I could, and to let him know I love him unconditionally.

My heart didn’t settle down the entire four hours he was at school. I wasn’t worried about his classmates. I knew them. But he was in a preschool program in an elementary school that went up to sixth grade. What would the bigger kids say in the halls? What would the teacher think when my son took off his coat and stood at his cubby in a white maternity monstrosity? She didn’t know about his dress-wearing at home. I prayed that maybe he’d just changed his mind first thing and traded the dress for his sweatshirt. I hoped that his teacher would protect him in the same ways I would. I spent my morning worrying, feeling my heart pound ceaselessly in my throat.

When I picked him up, he was still wearing the dress. He was also still wearing a smile. I asked him how his day was, but he didn’t mention the dress. I sent the teacher an email as soon as we got home. She responded almost as fast; his dress had been a non-issue. He might have gotten a couple looks from big kids, but my son was happily oblivious. I wrote back, confessing what a nervous wreck I was. As I typed, I wondered, Do we owe it to our kids to protect them by teaching them to conform? Or do we owe it to them to let them make decisions for themselves?

As a mom, I’ve tried to follow my kids’ leads. When they were newborns, I nursed them at their very first hunger cues, paying no attention to the clock. When they wanted to sleep right next to me throughout their first, second, and third years, I was fine with it. My son was no worse for the wear the day he wore the dress to school. He was his happy, sensitive, funny, enthusiastic self.

We're well over a year since the day he wore a dress to school, and I’m confident I made the right decision. But, really, it wasn’t mine to make. It was his decision, and one I supported. I’ve realized I can’t always be there to protect him, and while the dress thing was somewhat unique to him, that realization about motherhood is universal. We all have these heart-squeezing moments. We all have times where more than feeling our children’s pain, we feel the pain of things that haven’t even happened yet. We feel the pain of things that might happen or the guilt that we might not have done the right thing. We feel the terror that it’s not all in our hands.

My son grows more and more confident each day. One time after I painted his fingernails blue for him (he chose it because blue is a “boy’s color”), he told a little boy at the playground that some boys like their nails painted. “Like rockstars,” he said. Another time, he told a child that his favorite color was pink. That kid said what almost every kid says: “Eww, that’s a girl color.”

“No,” my son corrected him patiently, “It’s an everyone color.”

“Yeah,” another kid piped up. “Some boys just like pink. It’s fine.”

My son is in kindergarten now, and while he hasn’t wanted to wear a dress in a long time, I don’t doubt that he will one day discover another way he is painfully different from his peers (as we all do), but I think that maybe he’ll be OK. Maybe, even though we didn’t talk about it at the time, he has taken away some big lessons through his experiments with gender expression.

No one knows him better than he knows himself. He knows what’s right for him, and he knows that other kids aren’t always right. Most importantly, he knows that I love him, the real him, whatever that means on any given day.