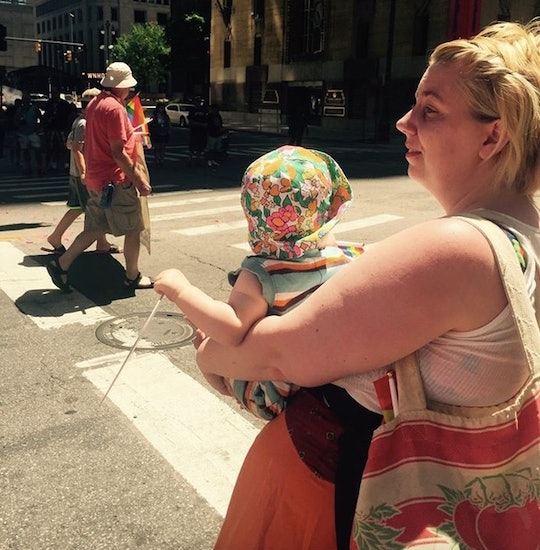 I Let My Todder Watch 'Harry Potter & The Sorcerer's Stone' & Honestly, It Saved Us Both

Screen time is often a hot topic amongst parents these days, and different parents often have very different ways of dealing with the issue. It seems like only a few short weeks ago, the American Academy of Pediatrics was still recommending that toddlers under 2 have no screen time whatsoever in their lives. I’ve known very few parents who managed to keep screens out of their child’s life until their second birthdays, and yet I was determined to do my very best. But when my toddler and I started watching the Harry Potter movies together, I had to concede that I might have been too rigid in my thinking.

Both my wife and I have a fairly hippie-ish background, so avoiding screen time for a toddler seemed like a natural conclusion. We knew we couldn't avoid all screens at all times (I work from home and FaceTime exists) but we thought we could at least minimize it. And, critically, we don't have a TV, and although we could watch a lot of TV online, we weren't about to go down that road.

So what happened to us?

Well, we got sick. The baby caught a cold and then I caught it, and it turned out to be pretty brutal. If you haven't had the magical experience of tending a sick baby while sick yourself, allow me to enlighten you! It is basically the worst thing ever. He started waking up constantly at night, which sucked for him but also meant I couldn't get the rest I needed to get well. He also started breastfeeding more or less non-stop, which meant that while I needed extra fluids, I was consistently dehydrated. And he was generally clingy and whiny, but also wanted me to play and entertain him. And I couldn't, I just couldn't. I felt like a huge failure.

But what to watch? The criteria was tight, I had to find it suitable for children, but I also needed to be able to sit through it as an adult. I’ve heard other parents complain about the mind-numbing crap their young kids watch, and I wasn’t about to be the one to start that in our family. There was only one choice. It was Harry Potter and the Sorcerer’s Stone.

At the height of all of this, my wife and I started looking longingly at our small DVD collection. We'd never put something on for the sake of just watching it before, especially when it came to our son. I felt a little tortured about the idea, but at a certain point I was just too tired to care. When I'm sick, I like to binge-watch movies, and I wanted my toddler to be slightly less miserable if I could manage it. My wife kindly reminded me that we were both exposed to television at a very young age, and we in fact grew into perfectly capable adults with functional brains. But what to watch? The criteria was tight, I had to find it suitable for children, but I also needed to be able to sit through it as an adult. I’ve heard other parents complain about the mind-numbing crap their young kids watch, and I wasn’t about to be the one to start that in our family. There was only one choice. It was Harry Potter and the Sorcerer’s Stone.

That first time, when we put the DVD into our secondhand laptop and the music started up, he was instantly fascinated. I swore up and down that this was a special occasion and it wasn’t about to become “a thing.”

But I stayed sick. And it became a thing.

Here is the weird part, though. It turns out, I don’t really regret this at all. Because yes, I’m a mom, and yes, I’m a mom who is up on her knowledge about childhood development. But I’m also a human being, and human beings are sometimes selfish. Not only that, human beings are sometimes, tired, and they’re sometimes sick. I remember, way before I took the plunge into parenthood, friend of mine talking to me about the issue of sugar with her kids. She said, “I just feel like our whole family gets more out of eating dessert together than we lose.” And that is precisely how I feel about the magic of Hogwarts.

Just a couple of weeks ago, my beautiful 1 year old said “Voldemort” for the first time.

These days, I don’t know how many times my 1 year old has seen that first movie, but I know he’s seen the second one (except the really scary parts, we skip those) a handful of times as well. If you put the movie on, he likes to stand up to watch it. He loves it when Professor McGonagall turns into a cat, and he meows at her. He thinks quidditch is probably the best thing he’s ever seen in the history of the universe. He says “Gryffindor” as best he can, although with his toddler pronunciation it’s likely that only his other mom and I have any idea what he’s saying. He loves to watch the sorting, and claps along excitedly whenever anyone gets sorted into their correct the house (my little diplomat even claps for the Slytherins). Just a couple of weeks ago, my beautiful 1 year old said “Voldemort” for the first time ever. And I think we can all agree that this shows incredible bravery and maturity on his part.

Contrary to my fears, letting him watch one movie has not turned our house into a non-stop TV marathon. In retrospect, it’s funny that I ever feared that, because I don’t even like to watch TV that much, so how on earth would that happen?

In reality, what's happened is something much more moderate. Some days we watch TV or a movie, but lots of days we don’t. Overall, we’re probably watching slightly more than I’d like, but it’s only slightly, and none of it is the kind of terrible kids' shows I was so afraid of. He enjoys it without guilt or shame, because he’s a child, but he still enjoys playing with blocks, playing with the neighborhood kids, and cooking me ridiculous stews in his play kitchen. In short, it hasn’t taken over our life, because it’s just one small part of a whole life that includes many things.

I knew I'd want to share some of my pop-culture loves with my kid eventually, but I honestly never imagined it could be this soon. Just like with so many other things, parenting has turned out to be way different than we ever expected it to be. I knew that popping in a movie now and then could probably buy me some much needed time as a mom, but I honestly had no idea it would end up enriching both of our lives. And that is the only word for what we are currently experiencing with the magical world of Harry Potter: enrichment. If the Muggles just can’t understand that, so be it.