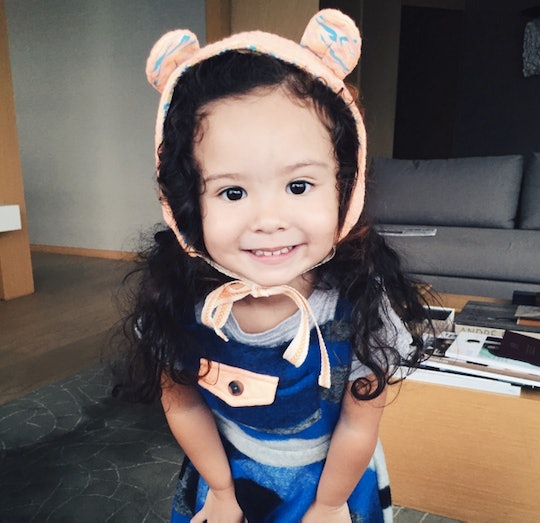 I Let My Toddler Try Instagram, & This Is What Happened

The other day, I was out running errands with my 2-year-old daughter Stella. Right after the bank and before IKEA, we had lunch together at our neighborhood spot, the one with really crappy service and the mediocre food that we can’t seem to stop frequenting. Stella was noshing on her cheeseburger like a little baby beaver, and it was so cute that I had to pull out my phone and do a mini photo shoot. As I was scrolling through the pics I’d just snapped, Stella leaned over, burger in her hands, and peered at my phone. “Wait. Let me see that one,” she said as her greasy little index finger made contact with my screen. I swiped back and stopped on the photo. She craned her neck and paused. “You should post that to Instagram,” she said nonchalantly, as she peered her little nose down at the photo and then leaned back to help herself to a fry.

I sat there, finger still in swipe position, staring at her with a “did she really just say that?” face. I was perplexed, yet amused. Concerned, yet delighted. As I watched her nibble her burger, eyes curiously scanning the bustle of the restaurant, one part of me was like, “what the hell, man?” but another part of me was like, “of course she did.” I’ve tried to make a conscious effort to not be on my phone when I’m with my kids. I don’t sit read articles or spend time checking Facebook when I’m with them. But I blog. So that means I take a ton of pictures. And I end up posting a few to Instagram a few times a day. And apparently, someone takes note. I looked back down at my phone at the picture Stella had pointed out. She was right: It was a good one. So you know what I did, right? I posted that sh*t.

Stella craned her neck to watch me quickly brighten, Clarendon-filter the pic, hashtag, and then post. “I want to do that. I want to have an Instagram like you and Evan (her 13-year-old brother).” My initial reaction was always going to be no. But then as she continued with a thousand “but why nots?" I took a few seconds to think about it. If I make it private and only allow our family members to follow her, it may be a fun project for her to share her life with the people she loves that live so far away. (We live in Hong Kong.) Maybe it’d be interesting to see what she found Instagram-worthy, I thought.

So I let her. But first, we laid out some ground rules. She could either take or choose photos that I’d then upload for her. She would dictate the caption and even include her own hashtags (turns out she knew what those were) if she wanted. But we could only upload once a day to prevent her from becoming addicted (like I am) to Instagram. And to prevent her logging too many hours of screen time.

According to the American Academy of Pediatrics, kids are spending an average of seven hours a day looking at the screens — computers, phones, TV, and other electronic devices. The AAP recommends that kids limit screen time to two hours or less a day. Aside from playing Dr. Panda games to keep her from freaking out in certain public settings, and letting her watching a few episodes of Peppa Pig on YouTube, I try my best to keep Stella’s screen time under control. But it seems that everything these days points to screen time, forcing us to accept that we live in an extremely plugged-in society. Does it require my 2 year old to have an Instagram account? Of course not. But I figured I’d treat it more like an experiment. Like a closely watched and protected journal. And if it’s really just Stella taking photos and telling me which ones she wants her family to see, I figured, hell, why not? Her grandparents and cousins would love it. She’d love it. And it would be fun to see it all from her perspective. I looked over at her edible face and said, OK, Stella. You can have your very own Instagram account. And damn, was she good.

Here’s what happened when I let my 2 year old do it for the ‘gram.

She Always Wanted to Capture Our Silliness Together

”Let’s do a selfie of us, mom,” Stella tells me. “And then we can post it and grandma and grandpa can see it.” So I took the photo and showed it to her. “Ha ha. That’s funny. And a little bit weird.” I am always happy and excited to take any photo with my kids. And I love that my 2 year old is always down for a silly photo. Most of our days are spent being total goofballs together, and it was special to me that she wanted to capture one of those moments.

Also: You know we live in a world dominated by social media when a 2 year old freely uses the term “selfie,” and you don’t even think a thing of it.

She Was Conscientious of Her “Followers”

On a walk one day, Stella shrieked, ”Look at the potatoes, mom!” My dad is a potato farmer, so seeing potatoes always makes her think of her grandpa. “Can we take a picture of the potatoes and show it to grandpa? And can you post it, too? Auntie Jenny wants to see this. Are you gonna ‘ashtag?"

Upon seeing this pic, I thought, “Does she have an eye for these kind of pics? Has she seen enough of Insta that she just gets it?” I could maybe, possibly entertain that notion if she were not 2 years old, but no, this totally Instagram-worthy pic of beautiful fresh, colorful produce was taken wholly as a shout-out to her grandpa.

How The Hell Does She Know What A Hashtag Is?

Stella requested this picture, saying: ”I’m gonna do a sweet pose before I go to school. Maybe I can show this to Ms. Bettina.” Ms. Bettina is her teacher. “Can you put that I’m gonna go to school now?”

I don’t know exactly how, but Stella totally not only gets the caption thing, but also sort of understands hashtags in general, which is surprising/impressive/worrying? It’s crazy how kids are learning earlier and so fast about all the tech stuff these days. Stella can find her way to YouTube on anyone’s phone in a hot second, and has even managed to figure out my iPhone’s passcode just by watching me again and again.

And I know it’s not just her. Other kids her age can do the same thing. I realized she must have just picked up a basic understanding of hashtags just by observing and hearing her brother (OK, and me) talk about it.

She Took Pictures of Things She Likes, Just Like Adults Do

Stella loves dogs and has been begging for one incessantly. So it’s no surprise that she took a ton of photos of random dogs on the streets. And it broke my heart that she wanted to capture this sweet street-side pup so that we “never forgot about him.”

She Knew How To Take the Classic Instagram Food Shot

“You always take pictures of your cookies,” Stella told me. “I want to take a picture of my cupcakes like you. No, take the picture from way up high.” Oh my; what have I gotten myself into?

I guess she’s seen me, along with pretty much most people eating at a restaurant these days, push back my chair and hold my phone up high for the drone-like money shot to know that this pose it what makes a picture look good. I cracked up at this reminder that kids are always watching us. She’s right about my cookie pics.

Not Even A Toddler Can Pass Up On A #Selfie

OK, before we go any further, you should know that Stella spent about five minutes taking a series of selfies by herself. After looking at all 750 pics, she chose this one as the one to post. “Can you post this selfie, mom? And say this: ‘I’m gonna kiss you with cupcake crumbs.’”

Look, the #selfie has become part of our culture. It’s universal. When my daughter took a series of photo bursts of herself, I honestly chalked it up to a 2 year old having fun making faces into the camera. I remember doing that with my siblings at a young age. But it is weird and sad that my daughter making a “kissy cupcakes” face makes me wonder if they are really just duck lips in disguise.

Stella knew exactly what she wanted to post every time. Because I told her that her family members in the U.S. and U.K. would see her Instagram account, she was all fired up to take and post pictures for them to see. It’s what inspired her posts. That, and a little bit of influence from seeing mine and other Instagram accounts. She also insisted that each caption be the exact words she dictated to me. If I changed up the phrase even by a word, she’d get pissed. And the hashtags? Somehow she got the whole hashtag thing right, which was sort of scary. They were simple but relevant, most of the time. One time, she wanted to hashtag #MichaelJackson, but then retracted it after thinking about it for a few seconds. I’ll admit I was kind of relieved.

She either took the pictures herself or asked me to snap them of her. And once the pic was taken, she liked to scroll through the filters and try each one out. She seemed, in the end, to prefer Clarendon, either because she really liked it or simply because it was the first filter in the lineup. Or maybe it was the only one that seemed to work best for a 2 year old’s attention span. Thankfully, it didn’t become an obsession. She was OK doing one pic a day, and frankly lost interest after about 10 days. Her only followers were her grandparents and close family members who got a kick out of it all.

Because she had no cares about the normal weird Instagram pitfalls —like how many likes she had or how many followers she got —it was just a fun little journaling project for us to do together. After all was said and done, I am fully convinced that Stella could totally manage it on her own. Sure, the pics wouldn’t have the written captions, but they sure as hell would have her favorite emoji —the pile of poop emoji — everywhere.