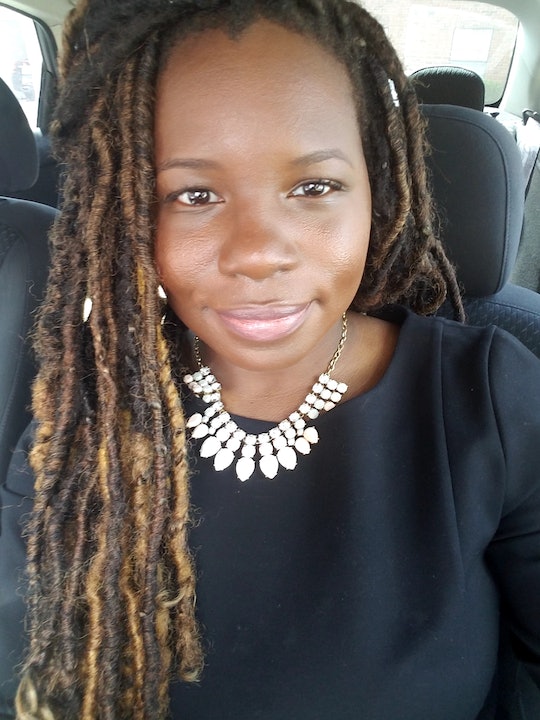 I Lost My Baby — But I Will Always, Always Be A Mom

When I start a conversation with someone I’ve just met, there are a few questions they inevitably ask: “What do you do?" "Are you married?" "Do you have any kids?” I can easily answer the first two: “I have a dance fitness company, which combines modern west African dance and strength training. Yes, I’m married, and my husband is my business partner.”

But when it comes to the third question, I start doing mental gymnastics, because I'm trying to figure out how to distract the person who’s asking it. You see, when you ask a woman if she has kids, her answer might be more complicated than you expect. In my case, I did have a child almost a year ago, but he passed away when he was a week old.

When I was six months pregnant, I was at my office when I started feeling severe pressure in my groin area. At first, I thought it was Braxton Hicks, or false contractions, because the pain would come and go. Then I went to the bathroom and realized I was spotting. So I called my doctor's office and they told me to go to the hospital. After the nurse examined me, I was told that I was dilated and that my amniotic sac was trying to come out. I was also told that I would not leave the hospital until I had my baby.

Later, my doctor told me that it looked like I had an incompetent cervix, or a cervix that's shorter than usual and is at risk of opening early, potentially resulting in pregnancy loss or a pre-term birth. Incompetent cervixes are fairly rare — they only occur in 1 out of 100 pregnancies, according to the American Pregnancy Association. Often, the condition is difficult to diagnose. In my case, I didn't know I had an incompetent cervix, and there was little that I or anyone else could have done to prevent it. It just happens. I was 24 weeks and 6 days pregnant.

For the first and final time, God allowed me to see my son fully. I will never forget the look in his eyes, and seeing them gaze back at me.

I was told I had to go to a hospital that specialized in micro-premature babies, or babies who are born before 26 weeks gestation. I arrived at the hospital at 1:30 p.m When we got there, I was having severe contractions and the doctors were ready to perform an emergency c-section, but I did not want them to deliver my baby at that time. I had been told that the longer he "cooked in my oven" (to be clear, these are my words, not theirs), the better his chances of survival were. So I was able to keep him inside me for three days.

On July 23, my son's heart rate was going down due to the stress of the contractions. Because he kept flipping around in my stomach, he was also tangled in his umbilical cord. After the third time the doctors asked, I consented to an emergency c-section. When my son KJ was born, he weighed exactly one pound. One of his eyelids was sealed shut.

Imagine that story being replayed in your mind, over and over again, every time someone asks you if you have kids.

My brave son spent seven glorious days on this earth. On the last day of July, he went back to where he came from: heaven. Although one of his eyes had been shut when he was born, when he died, both of them were open. For the first and final time, God allowed me to see my son fully. I will never forget the look in his eyes, and seeing them gaze back at me.

Two months later, my doctor went back through my c-section scar to perform a myomectomy, a surgical procedure that removes fibroids in your uterus. I had seven fibroids on my uterus. I was told that could have played a role in why I delivered KJ so early, but like so many things in life, the actual reason is unknown.

I'm torn between knowing that I am a mom and feeling like a fake mom, because my child died and because he died so early. I didn't just lose my child. I lost the experience of motherhood, and I will mourn that for the rest of my life.

What's even worse is the other variation on that question: “How is your son?” I understand why people ask me this, because when I got pregnant, we did not announce it on Facebook. We wanted to wait until we did our maternity shoot, which was supposed to be in the seventh month. But people who were close to us — my friends, family members, and sorority sisters — knew that I was pregnant.

Sometime after KJ passed, I posted a story about giving birth and KJ passing. Apparently, not everyone read the post, because a number of people have since asked me how my son is doing. One of the ways I cope with the loss of KJ is through humor, and when I tell them what happened to him, seeing the look of happiness on their face give way to one of horror is weirdly amusing. It’s like seeing a viewer’s face during the season reunion episode of the Real Housewives of Atlanta.

Recently, I was at my cousin’s graduation party, and I was talking to my aunt and her friend. We were just talking about Real Housewives and Bruno Mars, so it caught me off guard when my aunt’s friend asked the question: “Do you have children?” My aunt quickly replied that I didn’t, but I cut in and told her the truth: that I had a child, but he died.

After I left the graduation party, all of these emotions were running through my head. For starters, I was pissed off that my aunt had said no. Obviously, she knew about KJ's death, and I guess she just wanted to protected me, but when she said that, I realized how difficult it would be for me to answer that question with a "no" as well.

Now, when people ask me if I have kids, I will say yes, and it will bring me both sadness and joy: sadness because my child is not here, and joy because I was able to enjoy when he was here.

If I said, "No, I don't have any kids," I feel like I'd be denying one of the best parts of my existence. I'd feel like I was saying that I am not a mom. That is what I struggle with: I'm torn between knowing that I am a mom and feeling like a fake mom, because my child died and because he died so early. I didn't just lose my child. I lost the experience of motherhood, and I will mourn that for the rest of my life.

At that moment, it hit me that for the rest of my life, people will ask me if I have kids. And even if I have other children, whether it's two or three more, I will always include KJ in my answer, because I am and will always be his mother. He is my first-born son — my first-born child, period. I cannot not count my firstborn, my future children's little guardian angel. So now, when people ask me if I have kids, I will say yes, and it will bring me both sadness and joy: sadness because my child is not here, and joy because I was able to enjoy when he was here.

I know people have good intentions when they ask the question: "Do you have children?" And I understand that we as a society have a weird relationship with pregnancy, babies, and women’s bodies. But my advice is if you are not close to the woman you're asking, just don’t ask her that question. Talk about the weather instead, or talk about nail polish. Because the answer to that question is hers, not yours, to know.

If you have been affected by the loss of a baby during pregnancy or after and need support, contact Share Pregnancy & Infant Loss Support at 800-821-6819.