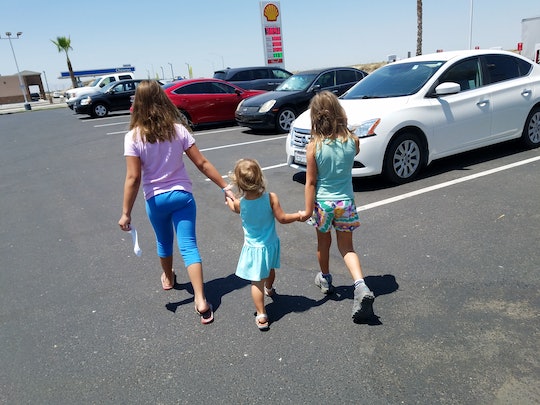 Whenever I’m out and about with my three daughters — at Target, at the doctor, at the local coffee shop — the question is almost inevitable: “You gonna keep trying for a boy?” Never mind that my copulation schedule is none of anyone’s business. Never mind that kids are really expensive and I’d need to win the Main Event at the World Series of Poker to afford another human of any sex. Let’s even pretend we dudes can control which chromosomes our sperms carry and which of the 40-150 million sperm we ejaculate endure The Amazing Race up the fallopian tubes to fertilize that egg. The bottom line is this: I couldn’t be happier as a “girl dad.” I want nothing more. Ever.

I’ve got a number of reasons for this perspective, and none of them pertains to the fact that I’ve seen 23 different live Indigo Girls concerts since the first Lilith Fair in 1997 (true story). Incredibly, in 2018 there are still many misconceptions about girls that warrant being called out by someone lucky enough to live in a house full of them.

First let’s start by noting how how reductive the words “girls” and “boys” really are. Not all girls are alike. Not all boys are alike. As the father of three child-aged human beings, I can tell you kids in general are different AF, and suggesting that all of one flavor are alike simply doesn’t make sense. By extension, then, the notion that equal numbers of “girls” and “boys” in any family would have some sort of balancing effect is preposterous. Kids are kids. I’m just glad mine are healthy.

I’m a man and I’m ashamed and disgusted about the fact that even today, even in 2018, this crazy world still overwhelmingly favors men.

That said, to play along and use the reductive mindset that everybody in society seems to use, girls can do everything boys can, and more.

For an enlightened few — hopefully you, dear reader — this is one of those “duh" statements, the kind of platitude that almost makes you sneer. Still, many people, including some in my own family, need the reminder. (Yes, Uncle You-Know-Who-You-Are, my wife actually has a Ph.D. She got it from working her ass off; not just for being hot.)

That same wife (she’s the only one I intend to have) is rock-star scientist, and infinitely smarter than I. My daughters (right now, ages 9, 6.5, and 2.5) play sports and excel at math and love grammar and fight like hell with each other and watch cartoons just like their male friends do. But I’d say my kiddos are more empathetic, more social, and more willing to work together than their respective male counterparts. They’re also just more aware; the five of us always joke at the pool that the only kids who splash are boys. (We call them the “splashing boys.”)

Also, if we’re talking about the ability of female humans to do more, here’s a crazy-quick biology lesson: When my daughters are old enough, they’ll be able to have babies (if they want), and no amount of nordic ski jumping is going to change that (despite what the International Olympic Committee might have thought about those fragile uteruses). But the fact that we see women's ability to gestate a baby as a limitation or liability says a lot.

In case you’ve been living under a rock for the last few decades, our society is a pretty grotesque patriarchy. Actually, let me rephrase that: I’m a man and I’m ashamed and disgusted about the fact that even today, even in 2018, this crazy world still overwhelmingly favors men.

Men earn significantly more than women, per the American Association of University Women, for no justifiable reason whatsoever. Men get more opportunities than women do, as the Telegraph has reported, usually because other men are the ones unlocking the opportunities. Male privilege opens the door to abuse (which our president, Harvey Weinstein, and Mario Batali, have been accused of, per reporting by Vox, USA Today, and Forbes, respectively, to name a few examples). I want to fight these realities, not facilitate them.

While my daughters are one inspiration for this perspective, I was a woke dude on this subject even before becoming a dad. In college, some of my (female) friends were victims of sexual assault. In my 20s, one of my closest friends was the victim of egregious sexual harassment. The last straw came last decade when I discovered a female freelance writing colleague earned about half what I earned for producing the same stories. When she told me our editor — a man, of course — had made snide jokes about his junk, I was enraged. I haven’t written for the jerk since.

I do these things because I feel they’re right. I also do them because I hope that by the time my daughters are adults, my efforts will have engineered change.

The easiest way to stand in the face of this patriarchy is to call it out; both my Twitter feed and the timeline of my life are full of #HumanityFirst and #F*ckThePatriarchy hashtags. But I try to fight it in more direct ways, too — by digging a line in the sand and simply saying, “No more men.” This is one take on the whole #TimesUp movement. When clients ask me to recommend colleagues for work, I only recommend women. When I have to report stories, I only include men if I’m asked. I do these things because I feel they’re right. I also do them because I hope that by the time my daughters are adults, my efforts will have engineered change. For them and for the rest of us.

Another byproduct of the patriarchy: Machismo is everywhere. We war instead of negotiate. We yell instead of taking a deep breath and sharing feelings. We brag. We bluster. We break shit.

There are chemical reasons for those differences. Researchers at the University of California, San Francisco, found 16 genes regulated by sex hormones that were “expressed differently between males and females in the hypothalamus.” The link between testosterone and aggression has been well-documented, as in this study by International Journal of Endocrinology & Metabolism. Anecdotally, I’ve spent the last few weeks working on a story about a trans woman who is in the midst of her transition. She’s told me all about her days as a man — how she couldn’t focus clearly, how she was short with people, how she was generally more irritable. She’s also described her life on testosterone-blockers and estrogen, noting that she feels more focused, more empathetic, and generally kinder. Everybody who knows her agrees — she is nicer in her current form than she was before.

Take from this anecdote what you will. I’m not calling for E over T in all cases. I’m not even saying E is better — there’s been plenty of research over the last decade that indicates estrogen is one of two hormones that can wreak havoc on women’s bodies and minds. I am saying that we men need to check our testosterone at the same time we check our privilege at the door. For me, the takeaway is simple: We need less machismo, less bragging and blustering and breaking, and more honesty, empathy, sharing, and building. More estrogen can only help.

To those who insist every generation needs a male human, I say this: HELL NO. And I say that as one of them.

One more thing. Even in 2018, even at a time when we’d like to consider ourselves evolved and educated, emotionally unavailable fathers wreck lives. This is true for fathers of any kids, including sons. It’s especially true for fathers of daughters.

Recent research indicates daughters whose fathers have been actively engaged throughout childhood in promoting their academic or athletic achievements and encouraging their self-reliance and assertiveness are more likely to graduate from college and to enter the higher paying, more demanding jobs traditionally held by males, reported researcher Linda Nielsen in a piece for The Institute for Family Studies. In other words, especially in the context of the modern-day patriarchy, it makes a difference when dads care.

This means the onus is on us dads to promote our daughters’ achievements, to encourage self-reliance and assertiveness, to inspire the kind of self-confidence and self-awareness that empowers them to know what they want and do not want. It also means we must show up to instill in our girls the unflagging perspective that they can do anything boys can do AND A WHOLE LOT MORE, no matter who might say otherwise.

If I did have a boy, I’d raise him to be critical of the patriarchy, respectful of women, empathetic to all, and fearless in the face of his own emotions. But to the haters and doubters and those who insist every generation needs a male human I say this: HELL NO. I say that as one of them.

I’m not going to keep trying until my wife and I have a boy. In fact, I’m going to actively not add another boy to the mix and try my hardest to reverse the downstream effects of boyhood on society and the world at large. I’m going to work tirelessly to tear down the patriarchy and create opportunities for my girls, their girls, and their girls’ girls after that. The way I see it, this is my responsibility as a girl dad. And I embrace it with abandon every single day.