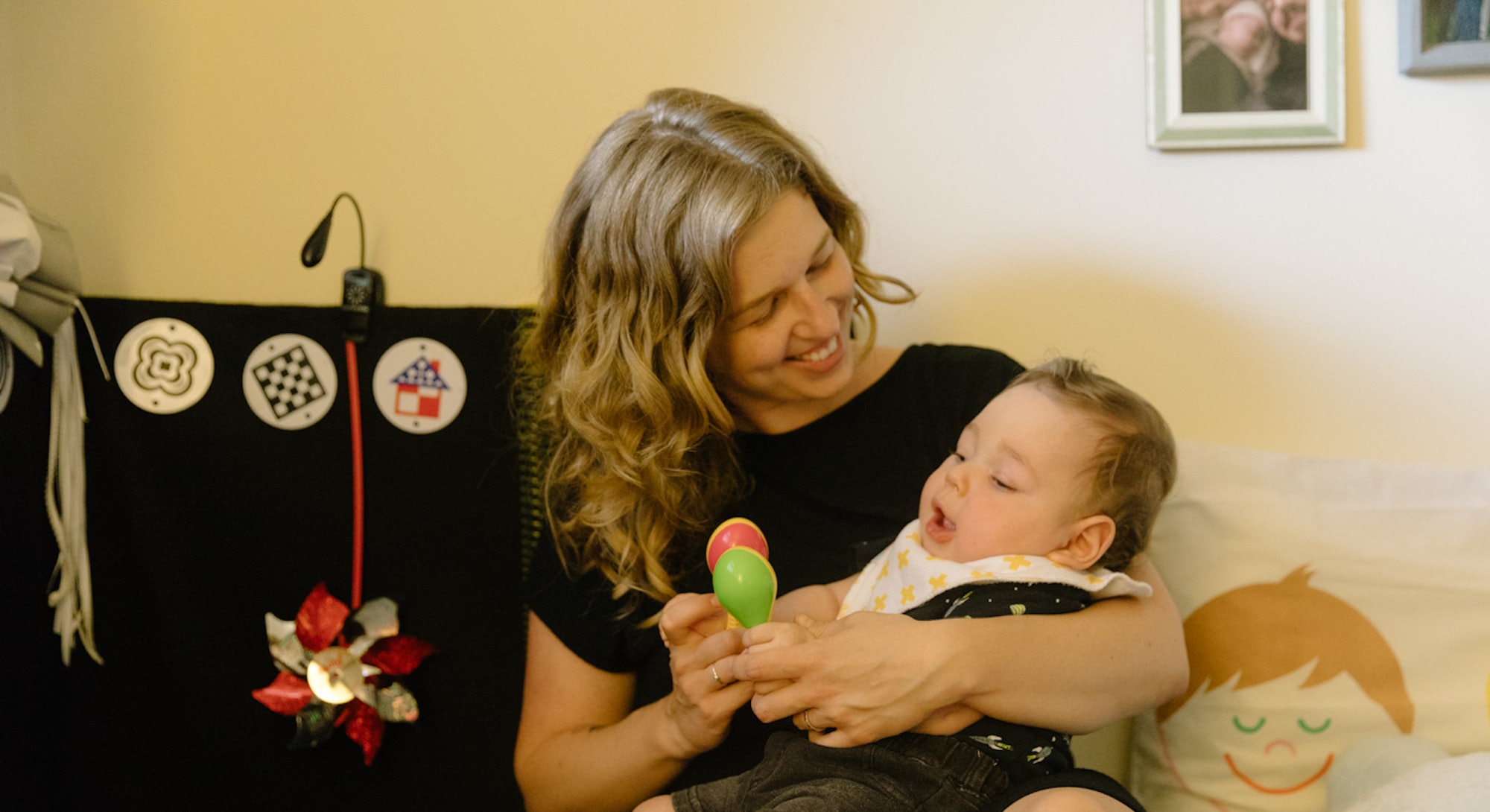 I Love My Profoundly Disabled Son. I Also Feel Like I'm Drowning

Amanda Smith, 33, of Nyack, New York, is the mom of a 9-month-old boy named Oscar. Oscar is one of around 375 known individuals with a genetic mutation in the gene SCN2A, which regulates sodium channels in the brain. The mutation is known to cause autism or abnormal brain function with epilepsy. In addition to epilepsy, Oscar has developmental delays, feeding issues, and visual impairment, and takes medication to help prevent the close to 100 daily seizures he experienced as a newborn. Oscar spent his first two and a half months of his life in neonatal intensive care units. Amanda is excited to tell me that, just a few weeks before our interview, Oscar started smiling.

Oscar was born at 39 weeks gestation. I had a completely normal pregnancy. I did every sort of screening that you could do, including genetic testing. Everything came back fine. The labor and delivery were normal. However, he was very slow to cry when he was born, and the doctor thought his difficulty breathing was due to meconium aspiration. So they put him in the transitional nursery for a couple of hours. The next morning he was taken to the NICU for labored breathing. Then in the NICU they noticed his seizures.

When we were in the first hospital, we had a few hospital employees pull us aside and privately mention to us that we may want to consider transferring him, which they weren't really supposed to do. I think that a number of people on staff recognized that his birth hospital may have exhausted their expertise with his complicated case. The Children's Hospital of Philadelphia (CHOP) was suggested as the best all-around option for him because at that point we still didn't know what was causing his seizures. And they would be best positioned to figure out if it was a genetic syndrome, metabolic condition, a brain injury, or some sort of infection. He was there for six weeks. He was still having a ton of seizures a day. I remember one morning, toward the end of our hospital stay, they were like, “Oscar only had like 70 seizures yesterday.” And I remember being like, “Wow, 70, OK! Getting better.”

A lot happened at CHOP: eventually the doctors found some drugs that could control the seizures and the abnormal brain functions. He had surgery to place a G-Tube [a permanent abdominal feeding tube], so we could nourish him at home. And the day before we were discharged to come home we got the genetic testing results that told us about his SCN2A mutation. (Neither my husband, Ryan, nor I carry the mutation.) It was rough. It was just so timely: diagnosis, then let’s go home.

So coming from the NICU, we were really pushed up against the hard reality of [the question]: What is this life? What is this going to end up looking like for us? We came home to a complicated life we weren’t expecting to live, surrounded by all of the toys that he’s never going to get to use. We still don’t really know what sort of prognosis he has, so having a whole closet full of kids clothes up to 2 years old, it is like: Will my kid ever get to wear this? Will my kid ever get to do a lot of things?

We really try to celebrate the progress he’s made, but we still have to be ready to drop everything and go live in the hospital for God knows how long. It is like a whole lifestyle change. And my husband and I both work full-time. I am an assistant director at a foundation. I am trying to do it all, because I want to but also because I have to. We are not in a position where one of us can be a stay-at-home parent. We are drowning in student loan debt. We live in one of the most expensive areas in the country. Our health insurance is through my employer, so I need to work.

I want to be able to give my son every single opportunity I can. Oscar gets nine in-home therapies a week through Early Intervention. [The federal Early Intervention Program provides therapeutic services for children under the age of 3 who have a developmental delay confirmed by the state.] At minimum he has five doctor's visits each month. He is tube fed, so we administer those feedings 3-4 times each day. Aside from all that, we still have the typical day-to-day responsibilities of a married couple and parents — clean, cook, etc. Add that all up [and] you get overwhelming exhaustion. You use any bit of energy you have to do your child's therapies each evening after a long day of work, but there are days where you just cannot be physically and emotionally as present as you'd like to be. When your child is finally asleep and you get some time to yourself, you pass out. Then you wake up each morning and do it all over again.

It is becoming more and more apparent every day that I have to figure something else out, because I am very close to burnt out. I was already predisposed to depression, but now I think I'm dealing with a mix of depression, anxiety, PTSD from the NICU stays, and PPD. I'm in therapy and take meds, [but] I am struggling every day. I am struggling to make sure that I do my best for my kid and that I do my best for my husband and for myself. Oscar was just accepted into the New York State Medicaid waiver program. [Since the Republican health care bill, which would have included deep cuts in benefits for Medicaid recipients like Oscar, was defeated] we can breathe a sigh of relief... for now. But, I'm just terrified of what can still happen.

When we were in the hospital I immediately sought out support groups. I really wanted the down-and-dirty "sit in a circle in a church basement and drink coffee" type of support group but I couldn’t find anything like that. So instead I turned to online support groups, especially Facebook. On Facebook I also unfollowed anybody that had a healthy kid or some semblance of a normal life. And now my Facebook feed is just the various support groups I’m in and funny cat videos. That helps because I just constantly seeing people talk about feeding tubes and adaptive strollers. It just made this sort of life feel that much more normal and manageable.

Once we were out of the hospital, I found a couple of local support groups for parents of kids with special needs, but most of them were for kids with autism or sensory processing issues. It is like you’re already isolated because you have a kid with disabilities, but then within the pool of kids with disabilities there isn’t much for parents of profoundly disabled children. So that’s why the Facebook community is so helpful.

I struggle right now with a lot of anger and resentment — which I think a lot of parents of children like Oscar feel, like when I look at kids playing outside. I think, "Why did this happen to my son?" My son is alive. He is here, but I am still grieving him. I think that a lot of people who share their journeys parenting a child with disabilities share the triumphs and the milestones and how their child is a miracle and all of that. And that is great but I also want to share how hard this is, and how heartbreaking it is. At the same time, it goes without saying that I love my son more than anything. And I would do anything for him. Oscar is my soulmate, and I never believed in soulmates until him. Also, I really feel the deepest love toward my son from other people. It can be a pretty amazing, life-altering feeling to feel that level of support and that level of compassion.

I just want people to see the life that we are living and to appreciate that there are so many different ways to live a valid life. We don’t know what Oscar will be capable of doing. He’s not expected to walk or talk or do many of the things that people would hope for their kids, but I want people to look at him and still think that he’s worthy of respect, love, and opportunities, that he’s worthy of an enriching life. And that is my personal goal: just to share his life with other people and to provide him with the best life that I can.