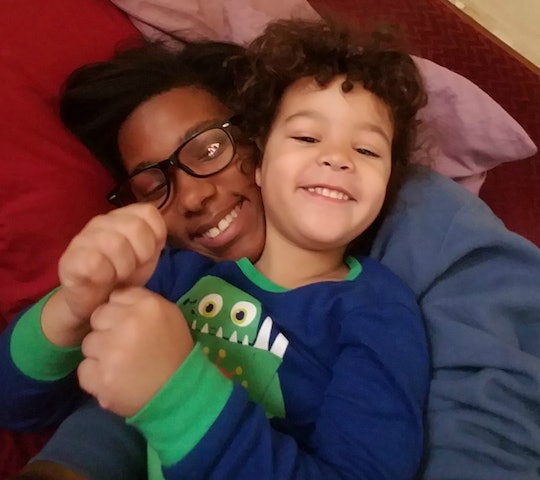 I'm Sick Of Breastfeeding My 3-Year-Old

“I want boobie," my 3-year-old demands as he climbs into my lap.

“Why don’t I get you a snack?," I gently suggest. He nods and slides out of my arms. What I really want to say is, “Get the hell off of me and go do something with yourself.” But I can’t. WHY NOT?

My son is 3 and a half years old and I never imagined that I would still be breastfeeding him. I didn’t think we’d get to the day when I’d cringe when he climbs up in my lap to nurse, or swat his hand away when he tries to lift up my shirt, but that’s where I am and I can’t apologize for it.

The last 3 years have been great, but I want my body back. I want my boobs to be even again. (He has exclusively nursed from the left side since he was about three months old; no amount of trying ever made him want the right.) I want to be able to wear tunics again. I want nipples that don’t look like pancakes. I want to be able to wear a regular bra (granted, probably an extreme push-up bra because deflated boobs are real). I want my body to belong to just me again.

As much as I’ve enjoyed my breastfeeding journey so far, I am SO. DONE.

As my son got older, I thought that it would be easy to gently begin the weaning process when he was ready, but that never really happened. I always nursed on demand, so he had access to the boob whenever he wanted, and he didn’t like the idea of restricted access. After much training, I was able to get him to say “please” before he'd climb up into my lap and assume the position, which made it a little easier for me to say no, but he wasn't having any of it.

So instead of saying outright, "No, I will not give you boobie," I've tried redirecting his attention to another activity. Sometimes I'll give him a snack or a drink, or a toy or a game; in my most desperate moments, I'll give him access to electronics. I have no shame in queueing up the tablet as soon as he’s latched.

For so long, my boobs have basically been his, and so he still feels entitled to unlimited access to them.

In addition to the redirection, I've tried giving time restrictions on how long he nurses unless he is going to sleep. Sometimes that works. Sometimes he gives me a look that says “go screw yourself," and he nurses for as long as he damn well pleases. Honestly, sometimes I am more frustrated and annoyed by the 10-second nursing sessions than I am by the 10-minute ones.

As much as I practice and teach body autonomy with him in regards to his body and how he approaches other people’s bodies, he apparently does not see my body and my physical boundaries as worth respecting. For so long, my boobs have basically been his, and so he still feels entitled to unlimited access to them. I can’t fault him for that, but it doesn’t make nursing him any less exhausting.

To his credit, as he gets older, he does start demanding the boob less and less often. He can go long stretches of time when he doesn’t ask for it, but only when we’re out of the house. When we’re at home, I know when I'm looking too comfortable, because that’s when his little face pops up next to mine and he crawls into my lap. Most of the time, I know he's just nursing out of boredom, but as much as I try to break him from the habit, it is harder than I thought it was going to be.

In recent months, I have been experiencing some serious nursing aversion and when it comes on, it comes on really strong. I don’t want him to look at my body, let alone touch it, and those seem to be the moments when he needs to nurse the longest. I feel horrible sometimes when I push him away, especially if he is sleepy/sleeping, but I am so touched out that I am literally reacting based on my bodily instinct. I only started experiencing it recently, and holy cow, is it intense when it happens. It rips my heart out when I see how upset he gets and I try to explain to him that mommy needs a break, but he only sees it as me rejecting him.

There are days when he just latches himself on and I look at him and think, “I’m seriously going to be nursing this kid until he’s in college.”

I know that the days are long, but the years are short, and that one day I'll look back fondly on this time with my son. I also know how lucky I am that I have been able to nurse my son well into the toddler years. But there are days when he just latches himself on and I look at him and think, “I’m seriously going to be nursing this kid until he’s in college.” I have not taken our nursing relationship for granted, but that doesn't make me feel any less awful.

And yet, there are still beautiful moments when he hugs me and says “I love you boobies!," or the way his sweet little face looks as he suckles to sleep. I know that when all is said and done and we’ve finished, I will most definitely be sad, but right now I am looking for the light at the end of the tunnel, the one that will tell me that we’ve made it through our breastfeeding relationship. And I’m excited to see what our relationship will be like when nursing is no longer a part of the equation.