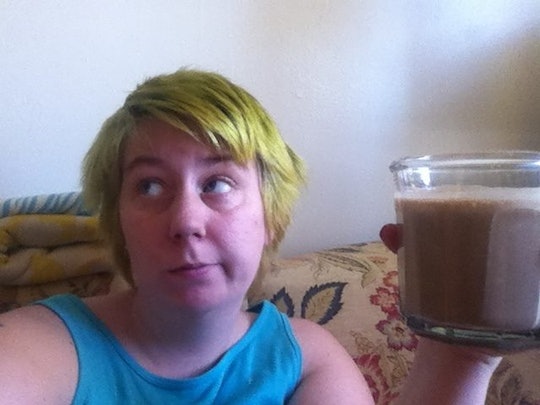 I Made 3 DIY Lactation Smoothies & Here's What Happened

If you’re a new mom or mom-to-be, and you’re on Pinterest, you know that smoothies are apparently a huge part of parenthood. (And if you’re not a parent, you know smoothies are a huge part of just, like, being alive, apparently.) In the past, my ideal smoothie recipe was: "What fruit do we have in the fridge?” and “oh god, is there milk?” But knowing that a lot of breastfeeding women turn to smoothies in an effort to boost milk production, I decided it was time to try something new! I love smoothies, they’re a delicious way to have breakfast when you don’t feel like it! Anyways, someone had to get to the bottom of this.

First, I took to Pinterest to discover which lactation smoothies were the most popular. I sifted through dozens of recipes, trying to find the most popular, but instead found that most of the recipes were really similar. So I chose three smoothies that were very different from each other, and relied on different components to help you create milk.

In order to determine their effectiveness, I devised a plan wherein, over a period of three weeks, I would try each smoothie for three days, with a four-day buffer to allow my body to return to normal (if any changes did in fact occur). I pumped my breast milk every evening, so I could measure any changes in milk production, and whether or not those changes were significant or just normal ups and downs. On non-smoothie days, I ate my usual diet and did not ingest any of the ingredients that my smoothie recipes claimed would give my milk production a “boost,” such as flax, oatmeal, etc. I continued to feed my baby on demand as usual throughout the experiment. Also, this was done well after I had established a good breastfeeding routine, since I have no idea how this might vary for someone just starting out.

Because this is for science, I’ve rated each smoothie (on a scale of one to five) in three categories:

So is buying that new blender really worth it? Let’s jump into the results and find out!

Smoothie Number One: The Green

2 tablespoons hemp seeds (I eyeballed it)

One handful of ice

Honey (or agave nectar) to taste

It has almond milk, flax, hemp for protein (oh my!), and spinach, which is supposed to increase lactation for reasons I don’t understand (I’m not actually a scientist, I’m sorry).

You have to put everything except the ice in first, which I found to be an annoying extra step, but it really needs the ice to be at all drinkable so it wasn’t worth skipping it.

Real talk? This smoothie was so awful. The first time I drank it I honestly had to slam a Coca-Cola right afterwards, thus making me the worst hippie in the land. It was just too bitter and too … hempy? It tasted like your worst idea of health food, like I should've taken a sip and felt like I was glowing but instead I was just trying not to hurl.

One of the days that I tried this one I made slightly more milk than my average (5.0 oz. versus 4.3). However, the other two days it was exactly the same. It’s impossible to tell whether or not that little boost was due to the magical bitter powers of spinach and hemp (blech) or whether it was something else. Making milk is complicated!

Most of the smoothie recipes that I found were some version of the one I ended up making. Some included Carnation Instant Breakfast packets, and some did not. I elected to skip it, but you could easily add it in if you were looking to get all your breakfast done at once. Protein comes largely from peanut (or any other) nut butter, and the magical ingredient that’s supposed to make milk happen is Brewer’s yeast, a single cell fungus used in the production of beer.

It was easy. Throw everything in the blender and go. I did it with and without ice. I made it by putting in the ice in at the beginning and the end, and my blender handled it all.

It’s deceptive! The first sip was pretty good, it tastes like, well, chocolate and peanut butter, which is what you want. It kind of tastes like chocolate and peanut butter with a touch of beer (from the yeast), which is probably not what you want, but is kind of doable — kind of — until it isn’t. The weird aftertaste compounded over time and became stranger and stranger. At the end on the first day, I actually had to take a break because I almost threw up. Your mileage may vary, but I have a very quick gag reflex (ha ha). You’ve been warned.

Since nearly every recipe out there was a variation on protein and Brewer’s yeast, I went into this pretty sure it was going to do something. It absolutely did not. There was no noticeable increase in either the amount I was able to pump or how, um, “full” I felt. Because of that, I decided to look it up. It turns out there is absolutely no scientific evidence whatsoever that Brewer’s yeast increases your milk supply. The idea seems to come from back in the day, when people used to tell nursing mothers to drink beer. The idea is that Brewer’s yeast can give you the same boob benefits, without all of the fun (or risk to your baby).

FYI: nursing moms totally drink all the time in Europe, and Europeans seem to be doing OK, just sayin.

I included this one because it was so much different than many of the other lactation smoothies. It didn’t rely on oats, or hemp, or Brewer’s yeast to get the job done. In fact, it just seemed like a pretty regular smoothie I might happily drink for non-lactation reasons!

It included the following ingredients:

Making smoothies is easy, you guys. Thanks for playing along.

This smoothie absolutely did not suck! In fact, it was really tasty. The berries and yogurt gave it plenty of sweetness without adding any honey or sugar. This was the last smoothie I tried, and my three days on this one were seriously a breath of fresh air after everything else.

I loved this smoothie most because it felt like a fun drink instead of a chore. All week long I'd been suffering through these less-than-stellar smoothies and this was the first time that I really enjoyed what I was drinking and putting into my body.

OK, I’m rating this two out of five because even though there was no difference in the amount I was able to pump during the three days I spent on this smoothie, there was, ahem, a noticeable physical difference, shall we say. Parents who've breastfed all know exactly what I’m talking about. It seems impossible that such a simple combination would have much effect, but my breasts felt more full more often, and there were leaks, even though my son’s eating schedule didn’t SEEM to change any. Maybe it’s the spinach? Maybe I was just better hydrated? I honestly have no idea.

So, Do They Work?

I’m going to say that no, lactation smoothies didn't really work for me. (At least the three I tried.) While this experiment (science! discovery!) seemed like a fun idea in the begining, throughout I found myself asking “why am I doing this, again?” about a hundred times. The majority of the smoothies were gross, and I really, really, hate pumping.

Based on both my reading and my experience, breastfeeding or pumping more often is a much surer way to give your milk supply an added boost than altering your diet. On the other hand, two things that you really need as a nursing parent are to be properly hydrated, and to get enough protein. That can be really tough! Especially if you are taking care of a baby. As a first-time mom, I really want to do everything I can to make sure my son is getting the nutrients he needs and that I'm taking care of my own body, but always making sure I'm doing everything by the book is daunting and totally overwhelming.

I liked making the smoothies because they were quick and fairly easy to assemble, but I think if I were to keep on down this path I'd definitely try to introduce better tastes and flavors so that I can actually enjoy what I'm putting into my body.