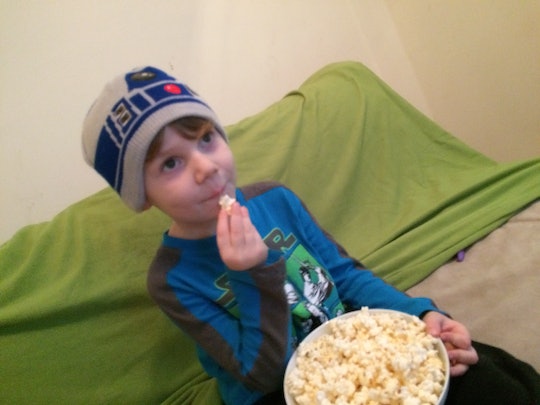 I Made My 5 Year Old Watch Every 'Star Wars' Movie, & Here's How It Went

My 5-year-old son loves Star Wars. He would love it if the three Star Wars t-shirts he owns could be on a constant rotation. He likes to "talk" like R2-D2. He owns his fair share of merchandise, some of it new and some of it left over from my partner's childhood. He's watched some of the Clone Wars TV show. He can hum the Imperial March. He's a fan. Up until this week, he hadn't actually seen any of the movies. In fact, I'm not sure he even knew that there were six whole movies that take place in a galaxy far, far away that he loves to imagine, and it gave me a great idea: What if we watched all six Star Wars movies together?

My earliest memories of playing with my brother involve lightsabers and pretending we were Luke and Leia and sometimes R2-D2 and C-3PO. My partner has similar memories with his brother, who was always really into Star Wars: the movies, the books, the action figures, the whole nine yards. Both of us feel like Star Wars really sparked our imaginations early on in life. For me, Star Wars was as much a part of my childhood lore as any fairytale. And we couldn't wait to introduce our kids to the magic.

My partner and I had high expectations of screening the movies with him. We hoped that (if they weren't too terribly scary) we'd be able to bring him to the theater to see The Force Awakens premiere. And, as any true fan will tell you, he can't see the new movie until he's up to speed on the previous six. After much deliberation about the order in which we should watch them, we decided to go in the order they were released. (Even if that meant saving the worst for last.)

Here's what my son thought about the movies.

And for anyone who hasn't seen them, there are *spoilers* ahead.

My partner was a bit nervous to get started. Mainly because I had made a grievous (not Count Grievous ... har har) error when my son was 3: I let him check a book out from the library that was all about Angry Birds Star Wars. For over a year, my son was convinced the beloved characters were R2-EGG2 and C-3PYOLK, and that the Dark Side was actually The Pork Side and was populated by angry green pigs. No amount of telling him the correct names would convince him. He'd read it in a book. He was an expert.

Through much coaching, he had finally gotten the names right. My partner was thrilled that Angry Birds didn't come up once.

I took a backseat to my partner and enjoyed watching him explain things to our son. His attention was rapt. He squealed when R2-D2 and C-3PO showed up for the first time. He couldn't wait to see Tatooine. He listened intently as his dad explained the Empire and why the Rebels were fighting them.

I couldn't wait to show him the next movie, which is definitely my favorite.

Episode V: The Empire Strikes Back

This film is notably darker and scarier than the first. So we weren't sure how he'd react. And in a couple instances, he was a bit frightened. The cave on Dagobah where Darth Vader just seems to show up and Han getting frozen in carbonite were the most notable moments of shock. (Somehow the monster on Hoth didn't scare him.)

But there was as much delight as nervousness. I mean, we get to meet Yoda. And finally Luke is wielding the lightsaber full time. C-3PO and Chewbacca have some lovely bonding moments.

Somehow the "I am your father" line had not been spoiled for him, which ... WOW. He didn't realize Darth Vader was Luke's father. My partner and I looked eagerly at each other as that fact was revealed. Then we explained it to our son. He accepted it easily. His mind was not blown. We were a little disappointed. It was a moment where we wondered if we shouldn't have waited a little longer to show him the movies.

Episode VI: Return of the Jedi

It's safe to say that my son was really invested in the world of Star Wars. In fact, he started using the Force to do lots of things.

Mom! I'm using the Force to make you walk up the stairs!

Did you see that car that just drove by? I was moving it using the Force.

This movie had been my favorite when I was a kid, and my son already knew he had Ewoks to look forward to. (They are so cute!)

He was really engaged in this movie too. He was disgusted by Jabba the Hutt. He was sad when Yoda was dying. And he finally really seemed to get that Luke was Darth Vader's son.

In the moments where Vader chooses to help Luke and redeems himself, my partner got a little choked up talking about fathers doing anything for their sons.

Overall, it was a really sweet experience. But how would my son react to the prequels, which — by all accounts — lack the magic of the original trilogy?

Episode I: The Phantom Menace

Confession time: I was 14 when this movie came out. And I loved it. (OK, I definitely reached a limit after seeing it five or so times where I couldn't stomach watching the podrace one more time.) But let's be real, what I really loved was Ewan McGregor.

My partner and I were very much relieved when our son wasn't instantly charmed by Jar Jar. We had both been fearing what having a Jar Jar fan in the family would be like.

Again, he was super excited when his beloved droids showed up and was thrilled when the characters found themselves on Tatooine.

In general, he thought the Jedi were awesome. I have to admit, that's something I loved about the prequels. The Jedi weren't an extinct order. They were still around, led by Yoda and Mace Windu. So many more lightsabers.

He hadn't pieced together that Anakin was Darth Vader, and my partner and I planned on explaining that to him, so it didn't shock him in the subsequent movies when he was super evil.

Episode II: Attack of the Clones

My son really started to lose interest in this one. It's OK, I did too. In fact, after seeing Episode I so many times, I had only ever seen this one once. Ewan was pretty cute with a beard, but I had moved on to his other works at this point. (Hello, Moulin Rouge.)

My son was as unaffected by the love story as everyone else who has seen this movie. But he also didn't cringe. My partner admitted he was distracted from enjoying the movie because he was too busy cringing. The only time my son perked up was when things were really dangerous for the characters, like when Obi-Wan fights Jango Fett on Kamino.

It was sort of too bad my son was losing interest, because at this point, we were committed, and we were watching Episode III no matter what.

Episode III: Revenge of the Sith

This film is PG-13 and yeah, we were letting our 5 year old watch it. Why? We knew there were spots we might need to skip over or distract him from. (The murder of adorable young Jedi being chief among them.) But remember, guys: We. Were. Committed! We'd started this experiment with one goal in mind, and we were so, so close to finishing! You can't go to opening night (or even any night after) and see The Force Awakens without knowing the full backstory. What kind of parents would we be — what kind of Star Wars fans would we be — if we threw in the towel now?

Despite our best efforts, he was really losing focus. He conveniently wasn't even looking at the screen when Anakin marched into that room in the Jedi Temple. (!?!!?!?!?!?!?!) In a way, I understood his lack of interest: So much of the movie is political maneuvering and saccharine love declarations. At some point, I don't remember when, my partner stopped trying to explain all the politics.

To our delight, my son perked up when there was the big lava fight scene. (I mean, hello, lava.) And when Anakin's legs are cut off, it was one of the biggest moments of shock and horror that my son experienced in all six movies. Oddly enough, after I was biting my nails about that, he didn't seem that upset by it. Maybe because lots of limbs go missing in the previous movies?

Despite his waning attention, my son got the biggest moment: Anakin Skywalker transforming into Darth Vader. It suddenly all clicked for him. Like Oh! This is why I was watching all these movies! To get to this!

Should We Have Waited To Watch The Movies?

If I had to do it again, I don't know if I'd wait on showing him the movies. Certainly he was into the original trilogy, and I'm happy he got to experience the story before he had absorbed all the big plot points from other sources.

That said, I think it's safe to say we could have waited on the prequel trilogy. But I also feel like it would be a shame to let him see the original trilogy and then the new movie without knowing the backstory. Plus, if he'd seen the great films then all he'd have to look forward to would be the worst ones. In a way, my partner and I felt like we were getting them out of the way. Don't get me wrong, we're fans, but there just isn't as much magic to those movies.

I am so hopeful that the new movie is going to be stellar, and I'm thrilled that my son will get to enjoy a whole new trilogy along with everyone else. The original trilogy was such a huge part of my childhood, and it was exciting to get to see the prequel trilogy as each film got released.

We will probably watch the original trilogy again one more time before seeing the new movie. But that's mostly because I am so excited to see it and to share that experience with my son, who seems to get the important things about Star Wars: Jedi are awesome, droids are the best, and spaceships are cool.