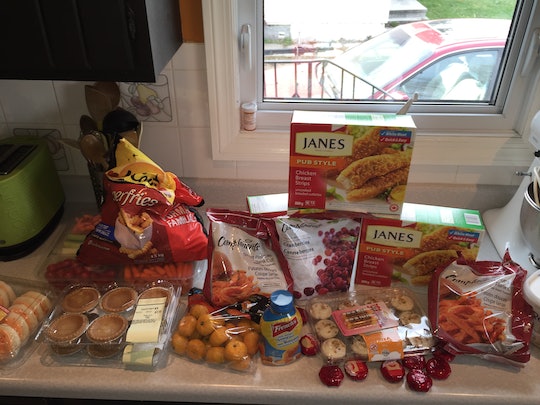 I Made Thanksgiving Dinner With Only Kid-Friendly Foods, & Here's How It Went

My daughter is only 10 months old, so I'm not sure that I've defined what "kid friendly" means to me yet. So far, she seems to have a pretty adventurous palate and I generally try to encourage her to try everything. This past week, "kid friendly" meant "as easy and quick as possible because you're screaming and I'm exhausted." It was a crazy week at work, and to top it all off, I had family coming over for Thanksgiving dinner on the weekend, which I hadn't prepared for at all. Oops. But then I had an idea: Instead of stressing a menu filled with ornate and complicated dishes, what if I made Thanksgiving dinner with only kid-friendly foods? Kids kind of get the short end of the stick on holidays: grown-ups make the meals and meals are usually filled with stuff grown-ups like. But since I have a daughter who eats kid food, I wondered what a holiday meal compromised of only the stuff she liked would look like.

I have a huge family, and family dinners are a pretty big deal. They usually involve upwards of 20 people, and the food is always homemade and delicious. So even though I was expecting a smaller crowd of nine this time, I was still a bit concerned that they wouldn't enjoy whatever "kid friendly" fare I ended up serving them. Dish after dish of finger food didn't really feel like it would stack up — especially when the alternative was yams and potatoes and turkey and cranberry sauce, but I figured, why not?

I'll admit that I was curious what a meal made up of solely kid-friendly options would look and taste like. Could I scrape together a satisfying meal that wouldn't be deep friend or filled with preserves? Was it even possible to make a Thanksgiving meal out of just kid foods? I wasn't exactly sure, but I was ready to find out. So the morning of the party, I headed to the grocery store and wandered the aisles in a daze, asking myself, Do kids like this? Do I like this? How am I even awake right now? I'm not sure what I came up with was super cohesive, but was it kid friendly? You bet it was!

I'd debated just using good old Kraft Dinner in place of homemade mac and cheese, but I just couldn't bring myself to serve it to guests. Don't get me wrong, I love the store-bought stuff. But there's a time and a place, you know? I guess one thing this kid-friendly Thanksgiving had already taught me was that I'm kind of a snob when it comes to food. Or like, more of a snob than I initially suspected. I also couldn't bring myself to buy canned cranberries. I have literally never eaten canned cranberries in my life, and it only takes a minute to whip up the fresh stuff.

I added a cinnamon stick and some fresh orange juice and the smell was everything. (Plus I felt better making the homemade stuff.) The mac and cheese was a bit more time consuming. I used this recipe, which was the product of a random online search. I made a couple alterations; I doubled the recipe, and added a heaping spoonful of my mom's homemade spicy mustard, and a bit of nutmeg at the end.

Like I said, my kid is too young to be a good judge of what's "kid friendly," but luckily, my cousin and her three daughters were coming over, and she told me they can be picky eaters. Dahlia is 8, Violet is 3, and Lily is 3 months old. My aunt and uncle also came, so with my parents and me, it was a nice sized little gathering.

The rest of the meal was ridiculously easy to throw together, which was the best thing about it. The only tricky thing was figuring out how to time cooking a bunch of frozen stuff in one oven so that it was all hot when we were ready to eat. I somehow managed to burn the sweet potato fries, probably due to my stubborn insistence that I never read package directions or use the timer on my oven, so I never really know how long stuff has been in there. I know, I annoy myself, too.

It was really weird serving chicken fingers to guests. But as far as chicken fingers go, they weren't too bad, and the kids definitely weren't complaining. I served the food buffet style, and we ate in the living room, which is pretty common in my family. It's hard to fit all of us around a table! As we ate, instead of going around and talking about what we were thankful for, we each talked about what foods we liked and didn't like as kids. My mom and uncle grew up poor, and my uncle said he would have eaten "sh*t on a stick," but his favorite food was spotted dick, which is a steamed pudding made from beef fat. My mom agreed that it was her favorite, too. My dad, who is 77 years old, was apparently a very picky eater as a kid. His favorite food was noodles with butter. My aunt liked oatmeal, but not if her mother made it. My cousin's favorite food was, and still is, corn on the cob. I loved pickles and hated sloppy joes (and the thought of them disgusts me to this day).

Dahlia said that her favorite foods were pickles, olives, and strawberries, but not all together, of course. I was surprised to see both she and Violet enjoying the celery from the veggie tray; I hated celery as a kid, and I'm not too impressed with it to this day. Dahlia and Violet seemed to sample and enjoy most of what I had prepared, except for the cranberry sauce. Which, to be fair, I didn't like when I was a kid, either.

My daughter, Anouk, had chicken fingers (a first for her, as we mostly eat vegetarian), mini oranges, French fries, and mac and cheese, all of which she finished and thoroughly enjoyed. She's a ham, and she makes a lot of "mmm" noises when she's eating. She had carrot cake for dessert, and she was super into it, obviously.

The biggest hit with the grownups was the homemade mac and cheese. It was pretty great, if I do say so myself. But you can't really go wrong when you put that much cheese in something. The best part of the afternoon, for me, was watching the girls play together. They're so sweet with each other, and it's cool to see a second generation of kids hanging out in the same house where I hung out with all my cousins for so many years. I'd be lying if I said I didn't love the lack of stress that stemmed from a meal that really just needed to be reheated.

My family is all about food. Specifically, homemade, hearty, filled-with-cream-and-sugar-and-carbs food. But that kind of food tends to be a lot of work. This meal was pretty easy in comparison. (And I think everyone loved it.)

"Kid friendly" means so many different things. When I was a kid, I liked all of the traditional Thanksgiving foods, including turnips and brussels sprouts. There are picky kids and there are picky adults, right? I think the only universal definition of "kid friendly" is "easy for the parent, and the kid is guaranteed to eat it." Sometimes you just need to get food into them. Like, it's been a long day, I just need to know that you ate something. Eat. Can you please just eat something?

I'd say my kid-friendly Thanksgiving was a big hit, because all the kids in the room ate it and enjoyed it, and it was easy and non-stressful for me to prepare. I didn't need to run back and forth to the kitchen constantly, and once it was done, all I had to do was set it out and then sit back and enjoy my family's company. And that's always the best part of any holiday or celebration. Still, I don't think I'll be giving up any of my labor intensive holiday foods anytime soon. They may be hard work, but they're worth it. And if the kids don't like it, there will always be plenty of chicken fingers for them.

More Like This
Festive Mommy & Me Holiday Nail Ideas To Try
101 Advent Calendar Activities, From Books To Read To Cookies To Bake
Real Parents Share What Time They Let Their Kids Rip Into Gifts On Christmas Morning
Spread Some Christmas Cheer In Your Child’s Bedroom