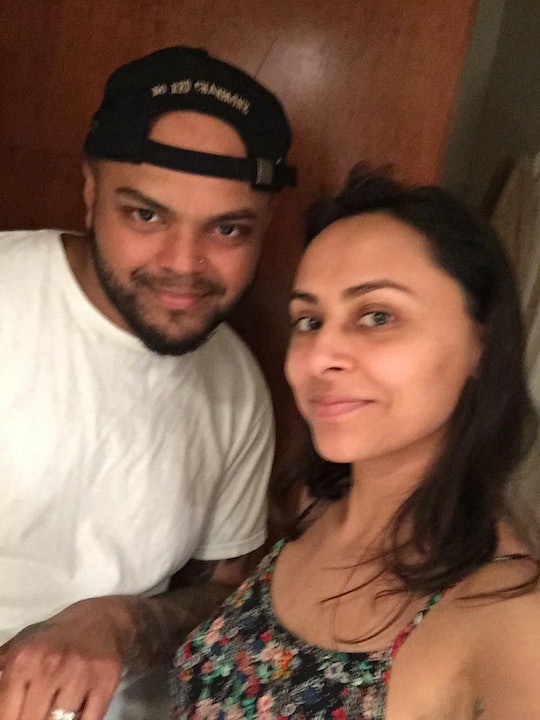 Making "Sex Dates" With My Husband Saved Our Marriage

People say that the key to a healthy and long lasting relationship is communication. They also say that it's important to maintain an active sex life. But after you have kids, both of these things become incredibly difficult — and the latter is arguably harder than the former. When you're busy with life, work, and kids, it can be incredibly difficult to muster the energy for sex. So we decided to start scheduling sex on a regular basis. At first, it was a last resort, but I don't think it's a stretch to say that it helped save our marriage.

After we had our daughter, my husband and I were anxious to return to our normal "activities," to to speak. During the last few weeks of my pregnancy, sex had become too uncomfortable, so we were eager to resume our normal sex life. But instead, we were in an endless fog of diapers, bottles, and laundry. We only talked about the baby. We talked about sleep training and sleep regressions. We discussed how much the baby was drinking and how many times she had pooped that day. We even had in-depth conversations about what color her poop was. We'd walk around like zombies, and if we had a moment to ourselves, we would sleep or catch up on chores.

At first, I didn't think it was such a big deal that we weren't having sex. After all, we were both new parents, and we had to put our daughter first. We thought that this was just an adjustment period, and we figured everything would be back to normal in a few months.

I never imagined that we'd become one of those couples who stopped having sex after having kids.

But needless to say, our dry spell lasted for much longer than that. For about four or five months, sex took a backseat in our marriage. When we did get to spend time alone, we were either scarfing down food or sneaking in a quick shower. My sex drive took a hit because I was too tired most of the time, and because I was pumping milk, sex was often painful. (Breastfeeding can cause your estrogen levels to drop, which can result in vaginal dryness and can make sex painful.) My husband was usually in the mood regardless of how tired he was, but we just couldn't find the time to have sex. When we were in the mood, it was usually at different times. We were like two sleep-deprived, sexually frustrated ships passing in the night.

Before we had a baby, our sex life had been pretty healthy, so I never imagined that we'd become one of those couples who stopped having sex after having kids. I knew that it was best to address this issue with my husband before it got worse. We had always made communication a top priority, and I knew that was more important now than ever.

My husband admitted that he wasn't approaching me for sex because he was trying to be respectful and understanding. He knew that I was overwhelmed and exhausted, and he admitted that, at times, he was too. I realized that I had a hard time turning off "mommy mode" and I was always thinking of my daughter's needs instead of myself.

I was concerned that sex with my husband would feel like yet another chore on my list.

We realized we desperately needed to make time for each other. Even though we were now parents, that didn't mean we were no longer a couple, and we still needed to find time to be alone together. So we talked about carving time out for each other to make "sex dates."

I was worried. I'd always thought that spontaneity was the key to a healthy sex life. If we planned sex, I wondered, would our sex life be ruined? I was concerned that sex with my husband would become too routine, or that it would feel like yet another chore on my list.

Over the next few months, my husband and I basically made sex appointments with each other. We worked around our daughter's naps, as well as our work schedules and family obligations. We didn't schedule it daily, but we aimed to schedule at least one appointment weekly. And you know what? It actually worked. Somehow, amidst the chaos of new parenthood, we were able to actually stick to these appointments.

I'm sure a lot of people think it's boring to have to set up an appointment with your partner to have sex. But it's better than not making time at all.

It might sound weird, but setting up these "appointments" was more satisfying than the spontaneous sex that we've had for years. There was something about my husband telling me he'd made time for us and then anticipating our time along together that was exciting. Perhaps more importantly, sex was also more comfortable for me now that it was planned. We were able to take our time instead of trying to rush. (Using a ton of lube also helped.)

Before long, we started having sex more often, without planning our "appointments" beforehand. And though we didn't have sex as much as we did before we had a baby, it felt like enough. Having time alone helped us restore some sense of normalcy. I felt like I fell in love with my husband all over again.

I'm sure a lot of people think it's boring to have to set up an appointment with your partner to have sex. But it's better than not making time at all. It's not always realistic to expect sex to happen spontaneously, so whenever life gets busy, we still revert to this method. It's kind of like setting aside time for date night. And honestly, if we had just left it to chance, I don't think we would've found time for each other at all.