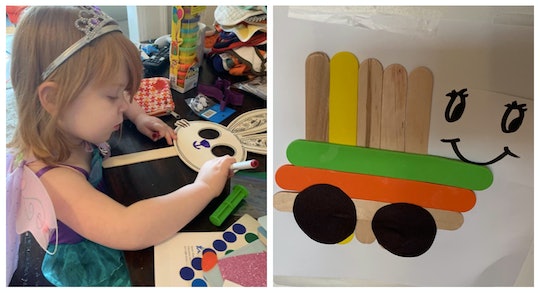 Courtesy of the author

Do I believe no child should be left behind? Yes, but especially not my child, who has intrinsic talent in gluing and assembling craft materials but is easily distracted by things such as chapstick and the Frozen soundtrack due to a medical condition that runs in my family. Given 500 hours, 3:1 supervision and a steady supply of string cheese, I believe she could perform art at an elite level, and basically what I’m saying is yes, I may have paid someone to glue those cotton ball clouds on for her during the pre-k entrance meet. But wouldn’t you?

All early learning facilities are not on par. While some have “sensory gyms” and smart boards, my child’s current daycare has a “fish tank” full of plastic sharks, and if that isn’t a metaphor for the cutthroat state of early education I don’t know what is. Where other children are liaising with future Supreme Court justices by the Spider-Man costumes, mine is regrettably hanging with future realtors — it isn’t right. My Juniper deserves the Harvard of daycares. Or at least the Princeton. (Although she doesn’t love orange, so I don’t fancy us being able to get her to wear a uniform.) But she’s up against legacies with siblings already in the door; the children of parents who paid someone to glue those cotton balls long before we did, and got grandfathered into the crèche at a top-tier university you have probably heard of, and maybe weren't even all that impressed with (sorry, Wake Forest!).

Having been caught red-handed in an elaborate pre-k admissions scheme, would I do the same again when it comes to my other child? Are you kidding me god yes.

Look, if everyone else wasn’t spending hundreds of dollars coaching their 3-year-olds to pass the gifted and talented test to get into the best pre-k program, maybe we could have an honest conversation about whether I Photoshopped my child’s head onto clip art of a toddler playing chess, but that simply isn’t the America I live in. I live in a country where it costs $35 to watch my baby throw a tambourine at another baby’s head in a tiny geniuses dual-language music class.

Who here has not considered lying about where they live to get their child into the same Gymboree that Blake Lively's children attend? May she who has not worn compression leggings to a "prospective parents" mixer throw the first stone. Perhaps a stone sourced from the same quarry as the house I said was mine on the pre-K application for that district.

The point is that if America is throwing down the gauntlet then UHYUH I’ll be throwing that gauntlet right onto the list I give to grandma and grandpa of expensive co-curriculars I'd like them to pay for instead of buying another singing electronic ice cream cart ahead of my child’s next cumpleaños.

We’ll also happily lie about how much screen time we allow in the house to the parent coordinator.

Having been caught red-handed in an elaborate pre-K admissions scheme, would I do the same again when it comes to my other child? Are you kidding me god yes. The child calls every shape a triangle and has been learning about colors for months now but will ONLY ANSWER THE QUESTION “WHAT COLOR IS THIS” IF THE COLOR IS “LELLOW.” I don’t even know how I’ll get him onto the ergometer when that day comes.

In all fairness, this was really about evening the playing field: our zoned school has been overrun by rumors of a killer clown among the second-graders. Damn straight I’m going to starve the PTA at that school by buying my way into a school with no mythological killer clowns, and if that requires me to convince my child she’s Mensa material, then so be it. You’d do the same.

Listen, I know how this looks. To you, I'm just some cashed up white lady with endless money to spend on differently sized pom-poms at Michael's, but for all the glamour and glitz in my life, I never attended pre-K. So you’d better believe that I’ll dub the vocals on a home recording of “Baby Shark” if it means my daughter can.