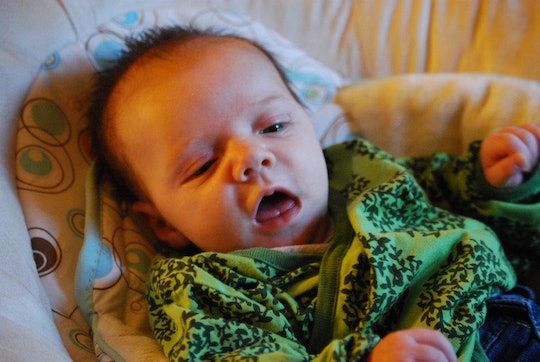 I Don't Regret My Hospital Birth One Bit

I looked down at my mucus plug and knew I only had a few days before giving birth. I called my midwife immediately. “I lost my mucus plug,” I said proudly. I thought she’d be impressed and excited.

“Call me when the contractions get five minutes apart,” she said. I hung up, a little miffed. But I was excited, because I was going to give birth at a birth center, naturally, probably in the tub. The hospital terrified me. I was told that they gave your baby formula and pacifier and took them away from you immediately after they were born. I wasn’t about to let that happen to my son. Little did I know I’d end up ditching the hippie birth center for the public hospital, and that I’d be grateful for every second of it.

My contractions started almost immediately. They waxed and waned for a day a half, weak enough that I could sleep through them, but too strong not to notice. I played video games. We went to Target. That night, they kicked up. They started to hurt. I do not do well with pain. We called the midwife.

“Are they five minutes apart yet? No? Stick it out until they are,” she said.

Then the back labor began. Back labor refers to when your labor pains wrap around your back, and don’t give you a break between contractions. It happens frequently when the baby is posterior, or sunny-side up. This time, we called the midwife and insisted she meet us at the birth center.

We tried going into the tub, but it was too cold — not pleasantly warm, like they said it would be on the tour. I leapt out of it like a slippery frog as soon as I had a contraction. Then my husband and I tried walking. We walked the halls for hours, while I cried and screamed and made noises like a dying wildebeest. He pressed his hand on my back and reassured me that everything would be OK.

I started throwing up. I couldn’t drink. They tried to feed me peanut butter, but I couldn’t eat and I threw up at the sight of it. The whole time, the midwife holed up in the office with her back up, chattering and laughing. My doula helped some, but not much.

The midwife tried to guilt us into staying, said I could do it “if I really wanted to.” I didn’t care anymore. I wanted to get out: out of the birth center, out of my body.

They tried to make me lie down. I leapt up screaming at every contraction. When she tried to give me homeopathic aconite, an herb that has been known to be toxic in certain amounts, my husband put his foot down. I was screaming. I was probably dehydrated, and I was definitely sick. We needed to transfer to the hospital.

I knew, in my heart of hearts, that transferring to the hospital meant I would probably be getting an epidural. I didn't want to have a medicated birth, but I knew I desperately needed medical attention. The midwife tried to guilt us into staying, said I could do it “if I really wanted to.” I didn’t care anymore. I wanted to get out: out of the birth center, out of my body.

I remember every contraction I had on the way to the hospital. I screamed through all of them. They brought me into the lobby, stuck me in a wheelchair, and yelled, “We’re having a baby!” as they rushed me to L&D. I was still terrified they’d take my baby. But I hurt so bad.

I felt nothing, and I wept out of gratitude.

I was so dehydrated that I had to have three bags of fluid before they could start the epidural - three slow, slow dripping bags. I was on my back in bed, crying at every contraction. The nurses hovered over me and cooed. Then they finally shot me up, in the middle of a contraction. When it finally kicked in, I thought, I can do this. Then the epidural took full effect. I felt nothing, and I wept out of gratitude. I even took a desperately needed nap.

Our doctor talked us through every single step. When I needed Pitocin, a drug that helps to induce uterine contractions to kickstart labor, she explained why she’d get it in my position, and left it up to me. When it came time to push, she actually dug a birthing bar out of an unused hospital closet. I tugged against it. I pulled a piece of cloth. We changed my position as much as possible. Finally, just as the head resident was threatening to take me back for a c-section, after three hours of pushing, my son was born.

I never could have pushed my son out without that rest, without that break in the pain. I would have ended up with that c-section if I’d have stayed at the birth center. Because of my back labor, I needed an epidural to get my baby out, and I’m glad we moved to a hospital where that was possible. I was also happy to find out that contrary to my belief, they didn’t give my son formula or a pacifier. The pediatrician did take him for a few minutes, but they brought him back when I called.

Some women can deal with severe pain. I’m not one of them. With its inattentive staff and its insistence on treating my contractions with things like homeopathic herbs and peanut butter, the birth center wasn’t for me. The hospital was a much better place for me to give birth. I’m grateful to the people who helped get my son out happy and whole. They weren’t the people I thought they’d be at the start of my birthing process. But in the end, it didn’t matter.