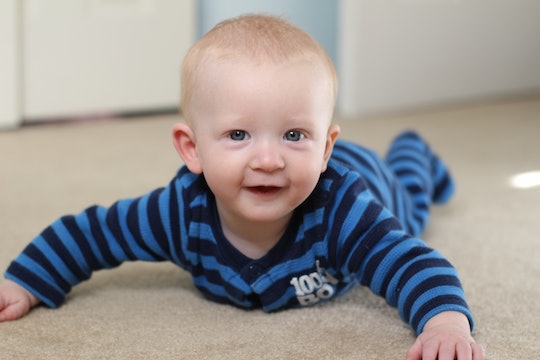 I Never Did Tummy Time With My Baby & Guess What? He's Perfectly Fine.

With my first child, I was very careful to follow all the parenting “rules.” I stressed out over him eating the right amount and sleeping the right amount (which totally drove me nuts). I made sure he didn’t watch any TV. I tried to ensure I was talking to him as often as possible, even when it felt totally weird talking to someone who I knew couldn’t respond. And you bet I did Tummy Time EVERY. DAY. I think the recommendation was twice a day, and I dutifully laid him belly down on a special blanket while he wailed in protest during those double five-minute increments. By the time I got to my third baby, however? I never did Tummy Time with my third baby, and you know what? The world kept spinning.

Not only did the world keep spinning, but my baby kept developing, at a seemingly normal rate. Now he walks and talks with his head upright, and I swear you’d never know I neglected this vital need during his infancy. He doesn’t even have a dreaded flat spot on the back of his head, because wouldn’t you know, his skull still formed despite my negligence. He learned to raise his head despite the odds. And unlike his older brother, he didn’t have to lie facedown on the floor screaming everyday in order to gain these life skills.

I've realized, as a mom of three, that all those things I was so worried about with my firstborn really didn’t matter as much as I thought they did. Tummy Time in particular was a struggle I dreaded daily. I knew he didn’t want to do it. I knew he was going to scream. I could even tell he was feeding off of my stress when the time to put him belly-down on the floor was approaching. He’d start to get fussy before I ever put him down, and I'd always feel guilty when we didn’t make it the whole five minutes because it was so miserable for both of us. But I felt like I needed to do it because it was one of those things you're “supposed to do.” How else would he develop any upper-body strength or be able to lift his head? I was so afraid of “messing up” that I didn’t see how silly it was for me to be stressed out over something so trivial.

I don’t know what sort of difference it would've made if I'd taken Tummy Time seriously with my third baby — but I have a feeling I already know the answer: for us, not much.

The truth is, the first time around, nothing feels trivial. Every decision you make as a new parent feels like a monumental, make-it or break-it type of choice. Looking back, it seems like it should have been obvious that Tummy Time wasn’t the end all to my son’s proper physical development. But when you’re so overwhelmed by all the new information coming at you from all directions, it’s hard to suss out the vital from the unnecessary.

I’m not saying Tummy Time doesn’t have its benefits. The American Occupational Therapy Association, Inc. recommends that babies need enough supervised Tummy Time while they're awake to "strengthen head, neck, and upper-body muscles," because it helps build "strength and coordination needed for rolling over, crawling, reaching, and playing." And I'm sure ample Tummy Time does help with babies' neck development and getting them to look around (you know, assuming they don’t spend the entire time bawling into the tummy-time blanket). It’s not like doctors just make this stuff up to mess with new moms. Hell, it might have even been the reason my third son didn’t start sitting up until he was 7 months old (maybe 8? All I remember was that when he did it, he older than the my other two children were, because you don’t keep track of the milestones as well the third time around, either). I don’t know what sort of difference it would've made if I'd taken Tummy Time seriously with my third baby — but I have a feeling I already know the answer: for us, not much.

The thing is, the benefits have to outweigh the drawbacks, and in the case of Tummy Time, they clearly didn’t. I felt drained every time I did it with my son. It wasn’t the “fun bonding experience” his pediatrician touted. Instead, it was five minutes, twice a day, of misery and wailing. And in my opinion, it wasn’t necessary. Of course, I'm not suggesting that all parents ditch Tummy Time forever. If it works for you, great. But it didn't work for us. At all. And I feel like my baby would've developed completely fine without it, like the children of yore who didn’t have Tummy Time and still turned into fully functioning, upright walking adults. Or better yet, maybe my firstborn would've been more like my third son, who never spent a single unwanted moment on his belly and turned out just fine too.