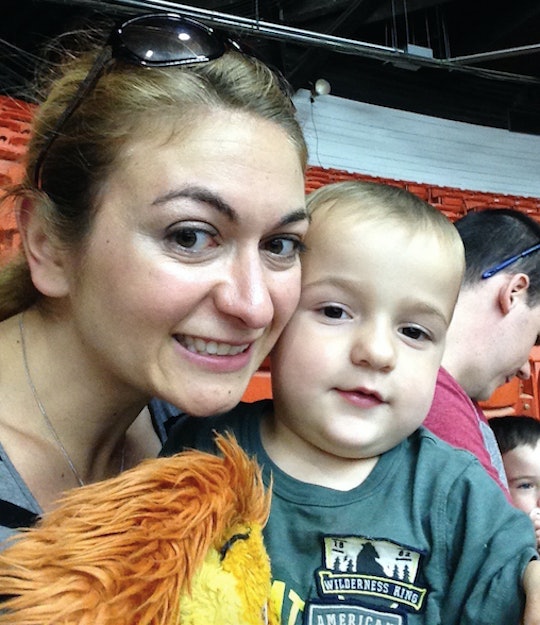 I Over-Praised My Kids For A Week & Here's What Happened

Although I am technically a Millennial, unlike most of my generational counterparts, I didn't receive a ton of superfluous praise as a child. My mom always reminded me that I was strong and smart and was the first to buy tickets to any play I was in, but if I brought home a test with a score of 98, her response wasn't to congratulate me, it was to ask why I didn't study harder to get that last question correct. Awards and good grades in my house weren't celebrated so much as they were expected. Without realizing it, I've been following the example of my own childhood by not praising my own 3-year-old twins very often. It's not that I'm not proud of them — I spend hours after they go to sleep looking at videos of them and telling my husband all the funny things they did that day — it just never really occurred to me to praise them for things at this age because they're too young to bring home worksheets from school or score a goal in soccer. When I think of praise and kids, I think kids in school, not kids in diapers.

It's been said that Millennials suffer as adults because we were over-praised. But Millennial moms are more confident in their parenting skills than other American mothers, and I can't help but wonder if a childhood full of praise has helped give us this confidence as parents. I wish I'd been praised more as a child because I wonder if it would have made me less anxious as an adult. I want my kids to be confident adults one day, so I set out to see if a little more praise was really a bad thing.

For one full week, I heaped praise on my kids like one heaps guacamole on a burrito. No matter what they did or how impressive it was, as long as they did something that wasn't destructive, I acknowledged it by saying something positive. Every little thing they did was cause for huge celebration. I blew everything way out of proportion in the best way possible, and my boys got to reap the benefits.

Here's what I learned, and what happened in the process:

I expected giving the kids lots of praise would lead to more fighting, because the kids are very competitive over toys and my attention. But telling my boys how awesome they were all day long actually improved their behavior. Telling them they were smart or sweet when they did something made them want to do that thing more and more.

For instance, the boys have a play kitchen and will often come to me with some "soup" or "coffee" to drink while I sit on the couch and type. But the game rarely lasts long, because one of them will get jealous over the fact that I took their brother's offering before their own or because they just decide they can't stand to play together for a single second longer. But when I actually looked up from the computer to say things like, "Did you make this all by yourself?" and "This is just what I wanted!" while peppering in comments like, "It's delicious!" and "How did you know I like carrots in my coffee!" all the praise made them giggly and giddy. They were able to play together for longer stretches of time without getting bored.

The non-stop praise made them try harder, too. While they usually bring me the same thing over and over, when I was giving them lots of praise their creations got more and more creative as they seemed to want to keep impressing me.

Peaceful playtime and I don't even have to get off the couch? Win, win (win).

My Kids Are Smarter Than I Realized

Because I was looking for things to praise my boys over, I was forced to be more patient with them. If we're trying to get to the store or clean up for bedtime I have a bad habit of zipping up their coats or putting toys away myself because I don't like to feel as though I'm wasting time. But I couldn't really praise my kids for letting me dress them or cleaning for them, so for the purposes of this experiment I was forced to sit back and let them do more things on their own (and on their own time).

When I chilled out and let them try to do things on their own I was amazed at just how much they're capable of. They're able to feed themselves, dress themselves, and even took the initiative to make their beds in the morning when I stopped trying to rush them down the stairs for breakfast. Watching for things that were praise-worthy made me realize that they aren't infants anymore and that I've inadvertently been babying them. If you'd asked me last week, I would've sworn that I never do anything to slow down my kids' development, but I think not giving them the chance to practice certain skills just because they take longer to do them on their own is actually holding them back.

Praising them for doing things on their own made me realize that I need to change my perception of time. When I feel like I want to do something for the boys in order to hurry us along that day's schedule of events, I need to remember it's also a great opportunity for them to practice their motor skills too. Hopefully assigning value to these periods where it feels like nothing is getting done will help me feel less frustrated during the day and less likely to dive face first into a wheel of cheese once the kids go to bed.

Perhaps the most surprising thing about heaping praise upon my children is that it made me feel more confident in my parenting skills. I work from home and workout a lot and sometimes I tuck my kids into bed at night and realize we never got the chance to read or practice coloring inside the lines that day. I get down on myself for the time I spend with my laptop and always feel like I could and should be doing more to entertain and stimulate the kids.

But spending the week complimenting the kids meant that I was on the lookout for things to compliment them on at all times, and watching them so closely made me see how great they're doing across the board. I always focus on the things I don't do with them, but praising them all the time helped me realize all the things I do do with them.

They always say "please" and "thank you," even to their stuffed animals. They have great imaginations and pretend the stairs are an elevator and the toy box is a boat. They know dozens of songs and love to dance and I'm pretty sure Lolo understands at least half of the words I spell out to his dad because when I said we should get "P-I-Z-Z-A" after the kids go down he says, "Yes, mushrooms, please." They can count to 20 and are kind to other people (if not always to each other).

Praising them for all these accomplishments forced me to acknowledge that they had to learn all of these things from somewhere. I give full credit to Super Why for their reading skills but I have to pat myself on the back because some of this is also totally my doing. It felt really good to let go of a little bit of the guilt that comes with working so much when I remembered I am not utter failing this whole "raise a decent human being" project.

Too Much Of A Good Thing Is ... Definitely Enough

There's research, according to Forbes.com, to suggest that too much unspecific praise can be detrimental to kids, and even though I only spent a week giving my kids tons of praise, I agree wholeheartedly. Stanford Psychology professor Carol Dweck, who is the go-to expert on the long-term effects of praise on children says that as with kids who are overpraised, even as early as age 3:

You see kids who don’t want to try anything hard and give up really easily, get upset even when they make mistakes.

I didn't get the sense that my own kids were getting overly frustrated at their failing this week, but I did notice that after a while the praise seemed to fall on deaf ears, especially if it wasn't specific. All week long I had been praising the boys for turning the light switch on and off appropriately as we left and entered the room. The first few days of the experiment they were thrilled that I noticed their efforts. They would take turns switching the lights off and on and got upset if their brother was hogging the light switch and the praise. But by the end of the week they were sick of my delight in their light switch capabilities. While the rest of us were playing LEGOs one evening, Lolo noticed that the room was getting dark so he got up without prompting and turned on the light. I started to praise him a bunch by saying, "Wow, Lolo!" over and over but instead of giving me a grin as he did just days before, he ignored me and went back to his toys. I kept up a stream of accolades, determined that he should acknowledge the fact that I was proud of him. And when he finally glanced in my direction he gave me a barely concealed eye roll that I didn't expect to see for at least another nine years or so.

I realized that praising them for doing something we both know they're capable of and that they've done before doesn't help bolster their self-esteem or make them feel more confident. It's acknowledging their efforts in trying new skills that they appreciate. So yeah, my 3 year old threw some serious shade my way.

Will I Keep Filling My Days With Lots Of Praise?

A week of giving my kids tons of compliments really forced me to take a look at how I'm parenting and what things are working and which areas I can improve on. Realizing that my kids are getting plenty of my attention and are developing well for their age was a huge confidence boost for me. But an over abundance of non-specific praise did seem to have drawbacks. As much as my kids blossomed when I applauded them for trying a new skill, they ignored me if I gave them empty praise or complimented them on the same thing over and over again. I can see how, over time, they could start to view praise as hallow if they hear too much of it.

As much fun as they were, I'm glad that my days as a cheerleader are behind me, but I'm not totally hanging up my pom poms. Going forward I plan to reign in the praise a bit so that I use it when they do something new or difficult, but I still want to try and praise them daily. Seeing how they tried harder if I was paying attention and knowing I have that much power of my kids' sense of accomplishment is scary, but I'd rather praise them too much than have them think they aren't measuring up to my expectations.