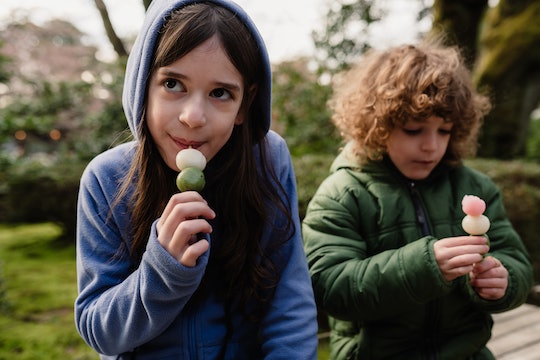 I Parent My Son and Daughter Differently. Here’s Why That’s Not A Bad Thing.

Being raised alongside my brother, I experienced a lot of double standards. My curfews were earlier. My clothing restrictions were stricter. My access to privacy when hanging out with friends of the opposite gender was nonexistent. There was, in my parents' minds, a certain way to raise a son that differed from the way to raise a daughter.

My mother once found a girl sleeping in my brother’s bed when she went to wake him, and her biggest concern was whether or not to make some extra breakfast. When my parents found out I had sex for the first time in high school, they all but disowned me. They grounded me, forced me to stop seeing my boyfriend, stopped making eye contact when they deigned to speak to me, and brought home a puppy they began calling by my childhood nickname. So maybe double standard is a bit of a euphemism. My brother and I lived in separate worlds in terms of privilege, freedom, and expectations.

It was infuriating, and I swore that when I had kids I would never treat my children differently. My son and daughter would be subject to the same rules, the same expectations, the same parenting through and through.

Now that I am actually parenting real live kids, I’ve realized that my goals weren’t only unrealistic, they were wrong. Despite my desire to create equality while raising my kids, I find myself raising my son and daughter differently — and I no longer necessarily think that has to be a bad thing.

Equal doesn’t automatically mean fair or good, especially when there are obstacles that will affect one kid and not the other. The real goal, the better goal, is equity — treatment which takes into consideration varying circumstances and focuses on creating a fair outcome.

Sometimes, that means bolstering my daughter's sense of self-confidence and encouraging her to raise her voice, a skill that the world will reinforce for my son time and again while it tells her to quiet down.

The world is not going to treat my son and daughter the same. They won’t always be subject to the same expectations and pressures. They won’t always face the same struggles. They won’t have the same childhood, even if I’m doing everything within my power to make our home a haven of equality. In a perfect world, equal would be enough. But that’s not the world we live in.

If I want to prepare my kids for the world in a way that will benefit them equally, my focus has to shift to raising them equitably, giving them varying skills to face the unequal treatment I know they’ll face. Sometimes, that means bolstering my daughter's sense of self-confidence and encouraging her to raise her voice, a skill that the world will reinforce for my son time and again while it tells her to quiet down. Other times, it means talking with my son about consent and listening, because he may not realize how much sway he might have over his peers who have been taught to “be nice” and “keep the peace.” And then it means going to my daughter to make sure she knows that she doesn’t have to be nice and keep the peace.

While I want their level of autonomy and their expectations for housework to be equal, society is going to treat them differently, and I want them to be prepared for those differences. That means I can’t simply parent them the same way and hope for the best. I have to be intentional with where I shore up those skills that others will try to take from them. I want my son to keep his softness. My daughter to keep her voice. I want them to grow up and still feel as whole as they do now. I know I can’t stop them from facing the expectations the world will place on them, but I hope I can give them the knowledge that those expectations do not have to define them.

More Like This
My Nanny Showed Me How To Be A Mother
From Captions To Gifts, These Are All The Kindergarten Graduation Ideas You Need
These Stepmother's Day Instagram Captions Are Straight From The Heart
Stepmom Quotes & Sayings For Every Occasion