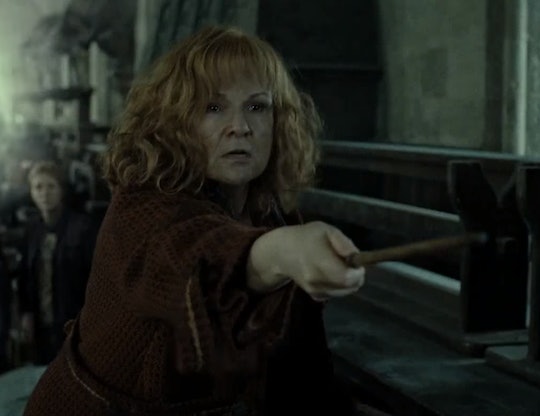 I Parented Like Molly Weasley For A Week, & This Is What Happened

Just over 18 years ago, Harry Potter, the Boy Who Lived, became an integral part of many of our lives. Some of us waited on line in costume to pick up copies of books two through seven, many of us rushed to theatres when the movies were released, and a few of us (myself included) made pilgrimages to Islands of Adventure, in Florida, when The Wizarding World of Harry Potter opened. Why? Because the Harry Potter series captivated us. But if you are unfamiliar with the Potter-madness, you’re probably looking at this title and wondering who the hell Molly Weasley is.

In short, Molly Weasley is the Woman of the Wizarding World. She is middle-aged, sports a flaming (and frizzy) red-haired ‘do, a wide and truly genuine smile, and an eclectic-yet-homely style. At first glance, she seems like nothing more than another haphazard, quirky, loving woman. Nothing special, just “mom". J.K. Rowling let seven books pass before she gave us the Molly Weasley that changed everything. Seven books before she gave us this:

Bellatrix Lestrange: "What will happen to your children when I've killed you? When Mummy's gone the same way as Freddie?"

Molly Weasley is a fiercely powerful woman, a loving mother, and a selfless human being. When everything in the Wizarding World threatened to fall apart -- when Harry, Ron, and Hermione threatened to fall apart -- she held them together. She held everyone together. And she held everything up. In order to act like her, I’d need to open my arms, my heart, and my mind to everyone around me; I’d need to cook more (and clean less); and, in short, I’d need to become an amped version of myself.

So armed with an apron, five pounds of flour, and more cupcake “cups” than I could count, I began my experiment.

While Molly Weasley may have been an expert crafter, my own skills leave a lot to be desired. I can’t knit — and I probably never will. But that didn’t mean I couldn apply the “Mrs. Weasley principles” to my life. You see, when Molly knit Christmas sweaters for each of her children, and Harry, she gave them more than a gift: she gave each of them something special and something personal; she gave them a piece of her heart.

Since I already cook — all day, everyday, baby! — and wasn’t learning how to knit in a week (see above), I wanted this “extra” to be more than a roasted-chicken supper. And so I broke my own rule and headed to Pinterest (which in and of itself shows a level of love and dedication I cannot begin to express). I surprised my husband with a note in his bag; I made my daughter origami bunnies for snack; I baked Devil’s food cupcakes, complete with homemade cream cheese frosting.

Did these things take a bit of time and effort? Sure. Did they add any stress to my life? Not really. Why? Because I loved doing them. I loved knowing I was doing something small which would put a smile on my family’s face, and I loved giving. Not buying a gift or giving out of obligation, but just giving: spontaneously, impulsively, and done simply for the fun of it.

I Learned To Let Go Of Appearances & Live In The Moment

If you knew me IRL, you’d already know I hate messes. I cannot stand clutter, loathe disarray, and get sick when I spot of an out-of-place shoe or dining room table covered in “the day’s crap,” which includes keys, wallets, dirty workout clothes, receipts, and other papers. But Molly Weasley doesn’t worry about things like that — and with seven children, one husband, and an endless stream of company, who the hell could blame her? The reason she doesn’t focus on these details isn’t because she doesn’t care about ‘em, it’s because she knows appearances have nothing to do with, well, anything. The Burrow may be simple, and it may look run down (like a “large stone pigpen,” as J.K. Rowling describes), but that doesn’t matter because they’re happy. Ron contextualizes it perfectly when he says, “It’s not much, but it’s home.” As someone who’s never known a home like this, Harry responds: “I think it’s brilliant.”

The less the Weasleys “have,” the greater their love becomes. The more chaotic their home is, the more enjoyable — and fulfilled — their lives are. And the bigger the mess, the bigger her heart. Besides, did extravagance and order ever buy the Malfoy’s anything? I think not!

What did this mean for me? It meant I let clutter pile up. I let frames hang askew, and left dishes in the sink. And you know what: I had one hell of an awesome week. I didn’t waste time worrying about what wasn’t getting done. I didn’t fuss over unswept floors and sticky countertops. Instead, I spent time with my daughter: at the park, playing tent, or singing songs. Instead, I focused on what mattered. (Bonus: My husband picked up some of the housework because he couldn’t stand it!)

I Opened My Heart

Molly Weasley isn’t only mother to her own clan: she opens her heart and home to extended family and to others -- strangers like Harry Potter, Nymphadora Tonks, and later, through not in her own home, the entire Order of The Phoenix. Regardless of who they were, what they did, or what they needed, she loved them all equally.

In the vein of benevolence and unconditional love, I spent the week asking others how they were. I offered to help a friend find a job — retooling her resume and searching the internet for open positions. I had another friend over for lunch, even through my house was a mess (see above) and I wasn’t really up for company; I extended a hand — well, arms — to an acquaintance I fell out of touch with many years ago. And while this is something I try to do anyway, this experiment (and Molly’s never-ending selflessness), reminded me to always be open. It forced me to be both physically and emotionally present — something I tend to lose sight of, and actively avoid, in this digital age. Not only were my actions helpful to others, as you never know when someone may need your home; your ear; your shoulder; or you, they were helpful to me, as they allowed me to experience a fullness I haven’t in years.

I Learned How To Supportive Without Being “The Support”

Mrs. Weasley loves her children, and she’d do any- and everything for them. (She did, um, kill Ms. Lestrange in like, the ultimate act of love and devotion and badassery.) But she also knows sometimes it’s best to step back. Sometimes children need to make messes so they can learn to clean them up. Sometimes children need to fight dragons, drop out of school — and open a joke shop — or work for the Ministry of Magic to learn what life is all about. Molly gives her kids (and Harry and Hermione) the space they need to grow, and to fail, but no matter what they do, or what mistakes they may make, she rallies behind them and cheers them on.

… Besides, she lets her magic clock keep an eye on them for her.

Since my own daughter is only 2-years old and sending her off into the wild would be fairly reckless, I settled for safer, simpler ways to let my inner Molly shine through. I stood back on the playground and let her do her own thing (unfortunately, this ended in a boo-boo when she tripped on a step and fell flat on her face); I let her problem-solve on her own; and I let her pick activities which were safe and within reason (she didn’t want to color on the paper but her tabletop made for some kick-ass crafts). The point was, I sat back and let her live and learn. I sat back and supported her decisions but also let her see the repercussions. I let her live a bit more dangerously even it it ended in bumps, bruises, and tears. I let her experience. I let her learn.

Maybe Molly Weasley Didn’t “Have It All,” But She Still Had Everything She Wanted

After a week in Molly’s shoes, I learned how to be a better mother, a better wife, and better woman. While I’ve always tried to apply these principles to my life — well, all except the aforementioned love of stinky litter boxes and cluttered coffee tables — this experiment allowed me to truly shift my focus onto others: to helping them, loving them, and supporting them.

It reminded me little things can matter, and hard work, humble self-sacrifice, and true love make all the difference.

More Like This
20 Best Backyard Toys For Kids Under $30 On Amazon
30 Easy Summer Activities For Kids That Work Rain Or Shine
Easy Fourth Of July Crafts For Preschoolers
Can You Get The Covid Vaccine For Kids Under 5 At Rite Aid?