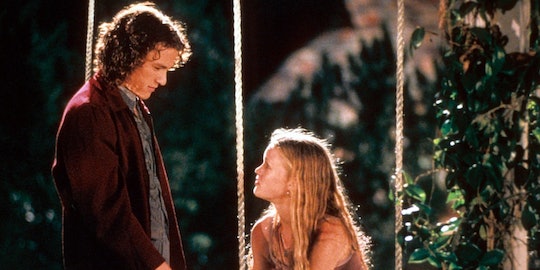 When it comes to ‘90s movies that shaped my world as a teen, no movie was more influential than 10 Things I Hate About You. I would quote it obsessively, because, let’s face it, this movie has the best collection of one-liners you could ever hope for. It also had a charming dark-haired Heath Ledger, was based on The Taming of the Shrew, and had the most romantic date and first kiss of any teen movie ever (paddle boats and paintball, anyone?). It’s a 90s girl’s cinematic dream.

I’ve long envisioned the day when I would get to introduce my kids to this masterpiece of a film. They’re still a bit young to watch it, but as far as I'm concerned, you’re never too young to develop an appreciation for the brilliance of 10 Things I Hate About You.

I decided to test the waters by parenting using quotes from the movie for a whole week. I had to narrow down my canon of 10 Things I Hate About You one-liners, since many were too inappropriate for my young children, but I was still left with some gems. At first, I was nervous. How would my kids react? Would they get it?

When I used it: Anytime my son used the word “just,” I was quick to jump on this quote. He often uses “just” as a way to make his requests seem more reasonable (it doesn’t), so responding with the deadpan flare of Walter Stratford seemed appropriate. Honestly, even though this experiment is over, I’m still channeling Mr. Stratford far more than is probably healthy.

What happened: Meeting all of my kids’ “just” desires -- “I just want a cookie!”; “I just want five more minutes!”; “I just want to play!” -- with, “and hell is just a sauna,” was entirely too satisfying. Their tantrums continued as normal, of course, but I felt like I’d snuck in a small victory with my 90s nostalgia. Sure, it was way over their heads, but what did it matter if it made me feel good? One time it even distracted my son long enough for him to forget what he “just” wanted. Luckily, he was only curious about what a sauna was (and not at all interested in hell, for some reason). We subsequently spent a disconcerting amount of time Googling images of saunas while my son debated whether or not he needed one for his grown-up house when he’s older.

When I used it: This was the response to my daughter’s brand of bargaining, which unlike her brother, tends to be far more dramatic. Instead of understating her requests with “just,” she screams and cries and gets progressively more despondent when she sees her pleas are getting her nowhere. Patrick Verona shuts that business down.

What happened: I got to use this quote plenty with my daughter, since she so graciously refused to nap for five days during my 10 Things I Hate About You experiment. She’d get out of her bed and go to her locked door, trying to bargain with me to get her up even though she hadn’t napped. There were cries for milk, stories of how she wasn’t tired or had already taken a nap, long drawn-out wails to emphasize her points. I would go in, gently put her back to bed, and give her the smooth words of Patrick Verona: “That’s a touching story. It really is … Not my problem.” It’s hard to say whether she was wailing over my comment or just the general awfulness of being forced to lie down and rest, but the response was never positive. I felt a little bad for being so callous with her, but at least it was an alternative to the redundant “get back in your bed.”

When I used it: This quote got pulled out for every tantrum, which is to say, it got plenty of use. I used it when my son got angry that he had to wear pants and not shorts when it was raining. I used it when I refused to give my daughter the whole entire jar of gummy vitamins. Generally, I got to use it whenever I told them something they didn’t want to hear, which results all too often in an angry, insensible rage.

What happened: The scene where Patrick takes a drunk, concussed Kat outside to cool off is basically a mirror image of life with a toddler. You’re trying to take care of them while they’re surly, unruly, and incapable of walking in a straight line. You tell them they can’t eat a bowl of ice cream for breakfast because it will upset their stomach, and suddenly you’re the worst mom ever.

So it makes sense that, “Who needs affection when I have blind hatred?” was one of my go-to quotes for the week. This quote was totally unappreciated by my children (who were generally being so loud and angry that they didn’t even hear me), but it actually helped me keep my cool  and make light of some of the daily tantrums. Taking the tantrums with a dose of humor made them more manageable. Instead of getting upset, I was able to see just how ridiculous the situation was and ride it out.

When I used it: I used this quote whenever I was in need of little parental confidence boost. I would often give myself this pep talk while pouring myself a glass of early evening wine. Or let’s be honest, the occasional afternoon wine. It’s my life, goddamnit.

What happened: I may not have directed this quote at my children, but I said it aloud to myself throughout the week and applied it to my parenting. Whenever I felt like I should be doing more Pinterest projects, or making more wholesome dinners, or exercising more because I was comparing myself to other moms on the web, I took a step back and gave myself a Kat Stratford pep talk: “Why should I live up to other people’s expectations instead of my own?” I shouldn’t, which was exactly the answer I needed to give myself. It helped me see how often I’m so hard on myself for things that don’t matter deeply to me. It reminded me to live more authentically, which is the only way to get through this motherhood thing.

When I used it: I used this in odd situations, like when my daughter wanted to read a book that her brother didn’t want to, or when they asked for healthy food, like bananas, and then when they started screaming over one another about who was going to receive the food first. I got philosophical and gave them life advice that likely went way over their heads. But how could I not include this one?

What happened: While this is one of the best and most inspirational quotes of 10 Things I Hate About You, it is terrible advice to give to a toddler or preschooler. Also, it was entirely unnecessary. This is basically their life motto already. No one, especially me, can take away their feeling of entitlement no matter how hard I may try. If they feel like they deserve ice cream, no one can tell them differently. Why wouldn’t they deserve that toy after having a screaming meltdown in the middle of the store, right? “Don’t ever let anyone make you feel like you don’t deserve what you want,” was met with resounding approval, and an overall attitude of, “don’t worry, mom, I won’t.”

When I used it: Whenever my daughter bulldozed over other people’s emotions, I pulled out this quote to put her back in her place. When she knocked over her brother’s block tower, when she painted the bathroom with my gel eyeliner, when she poured my husband’s coffee on the floor … you get the idea.

What happened: I gave my daughter this lesson plenty throughout the week. She’s a doll, and she knows it. But using her cuteness to her advantage is not something I want ingrained in her psyche so early. Whenever she would give me her signature adorable, mischievous grin after doing something blatantly wrong, I’d look her in the eye and let her know, “Just because you’re beautiful doesn’t mean you can treat people like they don’t matter.”

She just laughed at me, so lesson probably not learned, but it was a good try.

Was I Able To Turn My Kids Into 10 Things I Hate About You Fans?

I had a hell of a time introducing my kids to the classic quotes of 10 Things I Hate About You, though they don’t share my love quite yet. Their appreciation may not have been there, but the angst was real, which is, honestly, what truly matters.

I’m sure as they get older, and I add more of the inappropriate quotes to my arsenal of parenting wisdom, they’ll grow to love this 90s classic just as I did — and still do. Or more likely, they’ll think I’m weird and ask me to stop. Not happening, my darlings. I’m down. I’ve got the 411. My mama didn’t raise no fool.

More Like This
Stepmom Quotes & Sayings For Every Occasion
17 Best Potty Training Products For Toddlers
12 Genius Floats With Canopies (& Cupholders), So You Never Have To Leave The Pool
From Captions To Gifts, These Are All The Kindergarten Graduation Ideas You Need