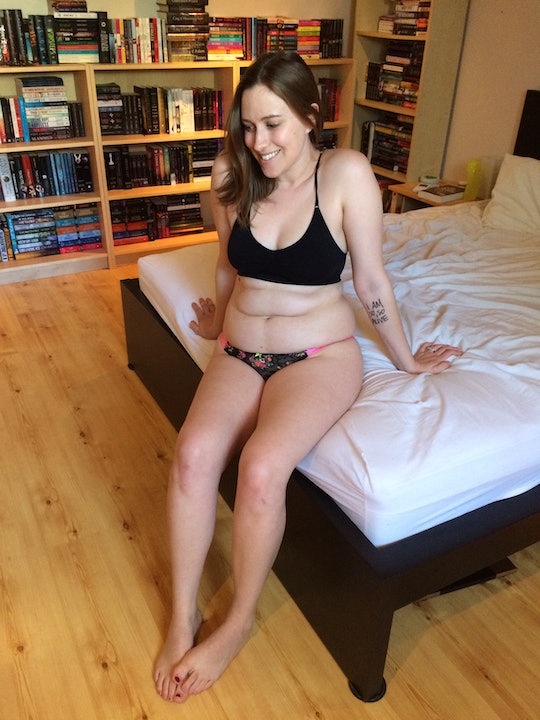 Every night before my daughter goes to sleep, I lie on my bed with her and breastfeed her. I've reached the point where I don't have to wear a nursing top or bra anymore: I can just lift up my shirt and let her crawl all over me. One of her favorite things to do is stick her fingers and hands into the rolls in my stomach created when I prop myself up against the headboard.

In theory, I should be flattered my daughter does this, because it means she loves the way my stomach rolls look and feel. But that doesn't mean I like the way my postpartum body looks. In fact, I hate the way it looks. And I'm far from the only one: according to a survey of 7000 moms conducted by Baby Center, 64% of women felt their body image had gotten worse after becoming a mother.

I hate most things about my postpartum body. I hate the belly that feels like it will never go away. The way that, when I lie down, my whole body seems to spread like slowly melting chocolate; the one and a half chins and the general sag of it all. When I compare myself to my husband — a man with six-pack abs who runs ultra-marathons, competes in obstacle course races, and voluntarily eats kale on a daily basis — I wonder what he sees in me. When I cheer him on at races or join him for a workout at his gym, I worry that his friends and teammates wonder why he's with me. Why would he be with a woman who looks like me when he could be with a woman like him? A woman who is strong and firm, who can run up mountains and lift heavy things over her head?

But I wish I didn't hate my body — not just because I want to set a good example of what self-love means for my daughter, but because I want to love my body, for myself. So, as a way to try to embrace my postpartum body, I posted photos of it on Instagram.

Going into the experiment, I thought — or maybe I hoped — that I would find it empowering. But I was wrong. I felt embarrassed taking the photos. In fact, I felt embarrassed just looking at them, long before I posted them. It's like when you need to see yourself wearing a bright red lipstick a few times before you get used to it: I had to stare at the photos for a long time before I was able to wrap my head around the idea of putting them up.

When I searched for #postpartumbody or #postbabybody or #2yearspostpartum, I found a lot of pictures of women flexing in mirrors, working out, and Before and After photos. What I didn't find were a lot — or any — photos of women who look like me.

After taking a few selfies in my bra and panties, I realized I wasn't going to be able to do this on my own. So I called in my best friend, who also happens to be a selfie expert. We picked the room with the best light and even did wardrobe changes and action shots, and we were left with more than 100 photos of me, almost naked.

Seeing my body, my stomach, my pale, saggy skin, made me nervous and scared. "I love this one," my bestie pointed out, or she'd say, "You look really cute here." But all I could hear were words like fat and ugly and gross ringing in my head. I did not want to put these photos on the Internet for anyone to see. To save myself the anxiety of having to share them more than once, I decided to post six with the app's new multiple image function.

It took me two days to muster the courage to post the photos. I tried to choose ones that looked as natural and fun as possible. I picked my six favorite shots, which were really just the six pictures that didn't make me feel like throwing up. I searched for hashtags to share my photos with a wider audience than just my followers. But when I searched for #postpartumbody or #postbabybody or #2yearspostpartum, I found a lot of pictures of women flexing in mirrors, working out, and Before and After photos. What I didn't find were a lot — or any — photos of women who look like me.

It's hard to embrace your own postpartum body when most of the other postpartum bodies you see look significantly smaller, firmer, and conventionally beautiful than your own.

Now, please understand: I am not judging a woman's choice to exercise and diet after having a baby as a way to fit into her old jeans, nor am I judging her for sharing her postpartum journey on social media. But I won't say I didn't feel a little bit betrayed by the motherhood community. It's hard to embrace your postpartum body when most of the other postpartum bodies you see look significantly smaller, firmer, and conventionally beautiful than your own. Because I am not on a fitness journey, and I am not trying to fit into my old jeans; in fact, I bought new jeans last month.

I knew that if I was going to post those photos, I needed to be prepared that people would come across my body, even if they weren't searching for images of bodies that looked like mine. And I was worried that they would be disappointed.

Finally, I was as ready as I'd ever be. I uploaded my photos, added my hashtags, and pressed Share. The response was immediate and overwhelmingly positive. Not a single one of my followers or any of the people who'd stumbled across my profile had a negative thing to say. I read each comment and tracked likes. I waited to feel better, to feel cured of my disgust with my postpartum body. But it never came. I looked back through those photos a hundred times and still saw every flaw. The rolls on my stomach, the way my fat hangs over my underwear. The fullness in my cheeks and chin that wasn't there before I became a mom.

"Real" bodies are only acceptable if they look a certain way.

I expected to post a few photos of myself and feel Insta-powerment. I expected to suddenly embrace my postpartum body. But that's not really how it works, is it? Instagram, like all social media, is a medium for us to present our best selves. "Real" bodies are only acceptable if they look a certain way. It was unfair of me to expect that posting a few photos would suddenly light the pathway to embracing my body. I felt bad because I disliked the way my body looked. But I also felt bad because I don't love myself as I am.

I opened my Instagram app and looked at the pictures again. I swiped through them so many times. Then I went back and I read the comments people had left. For the most part, they were supportive, if not a little bit rote. But I looked past what they said to who said them. Yaaass girl, from a woman who I think is so beautiful it hurts to look at her. Thanks, from a PhD and mom of two. I have always loved you because of sh*t like this, and, I love this, from childhood friends. This is so damn beautiful, from a writer whose words take my breath away. I thought about the look on my husband's face when I asked him, "Will you be embarrassed if I put these photos up?" And I thought of the quiet, sure way he said, "Never."

I am not a Before photo and I am not an After photo. I am a now.

I am working toward one day being as sure as my husband is that I should never be ashamed of my body. But it's going to take more than just me to do it. I may not love my postpartum body. But maybe I don't hate it, either. There needs to be room in the body positivity narrative — and how it's presented on social media — to talk about that. I am not a Before photo and I am not an After photo. I am a now.