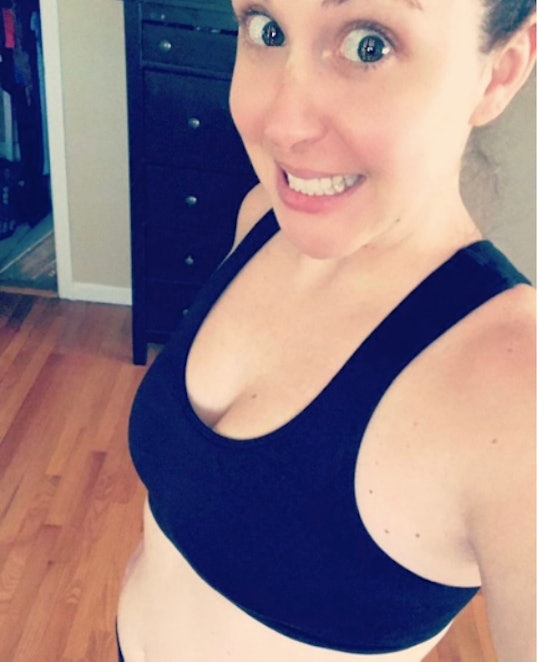 I Posted My Cellulite On Instagram For A Week

When my first butt dimple appeared in my 20s, I freaked out. But it was nothing compared to the cellulite that showed up during my first pregnancy. I was unprepared for what pregnancy hormones, water retention, and weight gain would do to my butt and legs. I was a walking, talking flap of adipose tissue.

After I delivered my daughter, most of the excess cellulite went away, but my self-consciousness and frustration over the remaining divots didn’t. Eventually the day-to-day craziness of motherhood eclipsed my body image issues, and I forgot about it. But my second pregnancy, which came with more weight gain and water retention than the first, brought it all back to the surface, both literally and figuratively. My thighs looked like golf balls, and they never quite recovered.

Over the years, I’ve tried caffeine scrubs, 30-day squat challenges and self-tanner to mask the appearance of my cellulite. But as someone who has always grappled with negative body image, I want to do everything in my power to ensure my daughter never struggles with her body the way I've struggled with mine. That's why this week, I decided to flaunt my cellulite, stretch marks, and belly fat on Instagram to set a body-positive example for my daughter.

I'm not the first woman to post photos of her cellulite in an effort to embrace her body. Earlier this month, model Charli Howard posted a photo of her dimpled butt and thighs, which quickly went viral. "I felt like my cellulite was shameful, or an oddity," she wrote in the caption. "It wasn't until I got older and saw other women's bodies that I realized how bloody natural it is." (Howard's right: according to Scientific American, cottage cheese of the flesh affects up to 90% of women, and it most often shows up between the ages of 25 and 35 — which is, not coincidentally, peak childbearing age.)

I want my daughter to see and understand that lumps, bumps and stretch marks don’t limit beauty or dictate a body’s worth.

Intellectually, I know cellulite is normal, and that most women my age have it, regardless of how much they diet or exercise. But I still know what it’s like to feel disgust at your naked reflection in the mirror. I have a history of disordered eating, and flirtations with diet pills and fad diets. And I want better for my kid.

It's important to me that my daughter knows what a normal adult female body looks like, without airbrushing or Facetune. So I let her see me naked. If she walks in on me while I’m getting dressed, I don’t scream for privacy or try to cover up. I let her squeeze my belly rolls and ask why I’m “so squishy.” I want my daughter to see and understand that lumps, bumps and stretch marks don’t limit beauty or dictate a body’s worth.

Likewise, I don’t hide my body from my toddler son. Because as important as it is for my daughter to understand that all bodies deserve respect regardless of shape and size, it’s equally critical my son does, too. Dismantling a culture that values skinny at all costs shouldn’t just fall to women; guys must lend a hand, too.

That's why I'm making an effort not to body-shame myself, either explicitly or non-verbally (because kids are very adept at picking up temperament cues). I refuse to set that example for my impressionable young daughter. I want her to see me celebrating my body instead.

Honestly, it was nerve-wracking to post the photos. I had mini-panic attacks before publishing each one, but I’m glad I did. It made me confront the long, complicated relationship I’ve had with my body and reflect on how motherhood has changed my self-image for the better.

To this end, I was pleasantly surprised that my posts garnered likes not just from women, but from men, too. Prior to launching my experiment, I'd assumed any feedback I'd receive would come other women—moms, mostly—cheering me on. It never occurred to me that men would like my unfiltered, raw photos. Not that I need validation from strange men on the Internet, but it was refreshing to see a body-positive message appreciated by those outside the intended audience.

That showcasing one’s natural body is considered “brave” is ridiculous and exactly why we need the body-positive movement in the first place.

I got a lot of likes and new followers, which underscores how strongly such posts resonate. It's one thing to have my friends like and comment on these photos, but quite another to have people I've never met do the same. It made me feel good — not just about my body, but about how necessary my body-positive message was.

That said, I also received a lot of texts from loved ones telling me how “brave” I am to post unfiltered pictures of my cellulite on social media. That showcasing one’s natural body is considered “brave” is ridiculous and exactly why we need the body-positive movement in the first place. No matter what our bodies look like, they ought to be celebrated and loved, not shamed or scrutinized against unrealistic beauty standards.

My Instagram experiment is only the beginning. I plan to keep contributing to the bodypos movement by posting unedited photos of myself. But I'll be doing most of the work offline, by raising two kids who feel confident and secure in their own bodies.

More Like This
Ashley Graham On The “Fun, Organized Chaos” Of Raising Twins
These Stepmother's Day Instagram Captions Are Straight From The Heart
Let’s Talk About Postpartum Hair Loss — & The Best Products To Deal With It
Stepmom Quotes & Sayings For Every Occasion