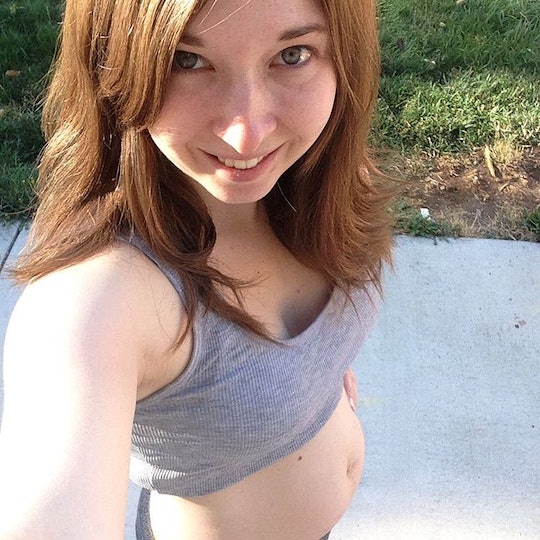 I’m still in a phase where I’m making peace with my postpartum body. It’s only been 10 weeks since my third son was born, so I’m in a weird limbo where I still look semi-pregnant. My body isn’t recovering as fast as it did with me previous pregnancies, and for the first time, I am left with stretch marks as a souvenir of a very large, round baby bump. I’m not ashamed of my postpartum body — not even in the slightest. Although it's definitely still taking some getting used to this time around. It's done this amazing thing, and it deserves respect and love. However, not everyone is always as quick to commend my body for simply being and surviving the astounding feat of giving birth. But becauseI was really interested in challenging everyone's perception of what I should do, I posted pictures online of my postpartum body.

I was curious to see the type of reactions a body in the "raw" would garner from friends and strangers alike. I used hashtags on Instagram to draw attention to my postpartum shape and posted the same photo again to my Facebook page. Because I wanted the reactions to be 100 percent honest, I stayed away from posting any caption that would sway anyone one way or the other. (Or even make them believe I felt a certain way about the picture.) I'm tired of the expectation and the assumption that postpartum mothers have something to "get back to" and something to be ashamed of just because their bodies look different after baby. My body looks this way because I've done an amazing, incredible thing. I created a life, nurtured it, and brought it safely into this world. And every day since, I've loved my son just as much as the body that housed him.

So I took a series of postpartum selfies over the course of a week and posted them to both Instagram and Facebook to see what type of reaction I would get.

My first postpartum selfie surprised me a little bit because it didn’t look as bad as I thought it would. When I took the photo I noticed that my stretch marks weren’t really noticeable (though in real life they most certainly are) and you can’t really see how my belly protrudes when I’m photographed head-on.

No one was particularly offended or surprised by the photo, and it only got a few “likes.” I found it funny that an Instagram fitness mom was giving me the thumbs up, when the reality was not nearly as fit and flat as the photo implied.

When I posted the photo to Facebook the next day, everyone was quick to comment on how good I looked for 10-weeks postpartum. The more I looked at the photo, the more guilty I felt for posting such a misleading photo. Yes, it was my real, unfiltered postpartum body, but a flattering angle was definitely hiding the truth. In a way, I felt like I'd cheated the people who saw this photo. I wasn't doing anything to hide my body, but I did have the benefit of a good angle and great lighting.

If I saw this postpartum photo of someone else, I’d think there were washboard abs under that tee. So the next day, I decided to show a little more.

When I posted my next postpartum selfie to Instagram, I felt strangely like I was posting a baby bump photo. I wondered if people perusing Instagram would do a double take to see if I was pregnant. Honestly, I'm willing to putting money on the fact that they definitely did do a double take. It is a classic baby bump pose. Except well, it’s not.

The postpartum bump is probably what I’m most uncomfortable with at the moment. It’s harder to hide than the stretch marks, and it's far more pronounced than it has been after my previous births. I'm not really sure how to dress my body quite yet to flatter my figure as it changes in the weeks and months following my son's delivery. It's not that I'm in any way ashamed of my body, but adjusting to the changes have been difficult this time around. I don't want people to think I'm pregnant again (I literally just gave birth), but I'm stuck in this weird limbo between being in awe of my awesome body and being surprise by its changes.

However, the reaction on Instagram once again positive, and I continued to get “likes” from fitness accounts even though my progress from one day to the next was going backwards. (I looked "bigger" in this photo than in the one I posted the day before.) I know that I have a petite frame, but the likes from fitness accounts left me torn: Were they applauding my body positivity, or were they liking these photos because they assumed I had something to work on?

When I posted the postpartum bump to Facebook, it got more likes than the first photo. I think the fact that I was showing a more “real” side of postpartum was the reason more people liked the second photo, and I was much happier with the angle I chose for this picture than in day one if this experiment.

However, the only comment I got was from a female friend advising me to use a “belly binder” to get rid of my post-baby "pooch." I hadn’t asked for advice on how to get rid of my belly, or even posted anything overtly negative about how I felt, but the assumption was there that the bump was unwanted and needed to be “fixed.”

I was a little shocked that someone would post something like that without me outright asking for help. Did it really look that bad? Was I coming off as desperate and unhappy with myself? I was starting to wish I had never posted this photo because the comment left me questioning the very reason I'd chosen to do this experiment. I wanted to highlight the fact that there's nothing wrong or shameful about a body after baby, but immediately I felt like the implication that there was something wrong (and something to be fixed) was there. And it was devastating.

My third postpartum selfie was the first one where I actually included my face. Not segmenting my body was a big step in the right direction, judging by how much better I felt about this photo. Even though it was the most exposed I had been so far, it gave a more full picture (literally) of not just some postpartum body, but my postpartum body.

This post got way more likes on Instagram than the previous two, and gained me a few new followers. Care to guess what kind? That’s right, more fitness accounts. Though at least this time it was warranted since I was posting a pre-run photo to my account.

When I posted my third selfie to Facebook the next day, there were more likes than ever. I found it interesting that no one commented on either Facebook or Instagram with this selfie. Since it was a workout selfie, I think the assumption was that I was doing something about my postpartum belly so it was no longer an “issue” to be dealt with. But still, it bothered me. I couldn't figure out what people were "liking": the fact that I looked happy, or because they assumed that a picture like this (of me working out with an obvious belly) meant that I was taking steps to "get my body back" after the delivery of my son.

For my final postpartum selfie, I decided to throw my little guy in for the photo, because I wanted to show the reason my body is exactly where it is right now. I wanted to show that it’s not just my body anymore. It's also a life source for my baby. It was his home, and his sister’s before that, and his brother’s before that. And really, when I thought about it like that, I realized: so what if it never looks the same?

There were a million things I wanted to write about how giving up my body for this baby was worth it, but I figured the photo could speak for itself. It garnished a few less “likes” on Instagram than my postpartum running selfie (which was disappointing), but still was more popular than the first two. I think the personal nature of the photo set it apart, and made it more relatable, especially to other women with kids.

My final postpartum selfie was well received on Facebook as well, with more comments about how good my postpartum body looked. This time I didn’t feel as guilty about the comments, because the photo was more revealing and more “real” than the first. I felt like people were seeing the real me. No flattering angles. No filters. No lies.

The final comment, though, really summed up what I had heard throughout the experiment. “Things will be back to normal in no time,” a friend wrote. This is my normal, I wanted to write back. There's nothing wrong or disoriented in this photo (save for the fact that baby and I look upside down). Why did people assume there was something that I wanted to change about this perfectly captured moment?

Throughout the experiment, all the comments I got were from women, mostly mothers themselves, who either wanted to praise my body for being small or applaud my apparent willingness to “reclaim” it after baby by getting “back to normal.” Even when I never wrote a single word about being displeased with my postpartum body, there was an assumption that I was, or that I should be, uncomfortable with my changing body.

In a subtle way, it seemed that other women with kids were the most uncomfortable with seeing my postpartum body out in the open like that (and by "open," I mean on the Internet). The notion of getting “back to normal” instead of accepting my body as the new normal was a theme throughout the week. No one told me to cover up or felt offended by my body (which I appreciated so much), but so many felt the need to bolster my confidence by telling me I would get my old body back, even when my confidence was never an issue in the first place. It shocked me that acceptance was such a far-fetched idea that not a single person mentioned it.