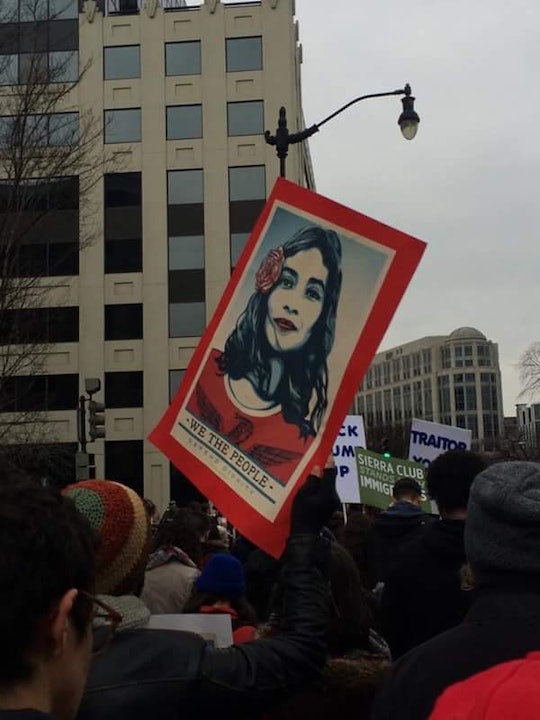 I Protested The Inauguration, & Here's Why

On Friday, Jan. 20, 2017, America has a new president. Donald Trump has officially been sworn in as the 45th President of the United States, with ceremonies taking place on the steps of the Capitol Building this morning. Following Trump's official swearing in, a parade took place, a route traveling from the Capitol building, through D.C., and on to the White House. While many were in D.C. to celebrate the occasion and witnessed the festivities, there were also large groups of protesters in the nation's capitol, there to stand against the legitimacy (or lack thereof) of a Trump presidency. However, as tends to happen during protests with a large turnout, there has officially been riot police interference, with multiple arrests and even tear gas being implemented on the demonstrators. But here's why you shouldn't think the inauguration protests are all violent — they actually have a crucial message.

While recent updates and photos may appear to show violent, angry crowds, I was actually at the protests, and witnessed nothing but respect, solidarity, and kindness while we marched through the streets of D.C. So please, don't let the isolated violent outbreaks deter from the real message of the protesters. They were, and are, marching for their rights, and their voices matter. Don't get confused or persuaded to believe that the entire crowd was hostile and violent. They weren't. I wasn't.

So many of the participants had powerful stories and messages to share. Here's what the Inauguration protests are actually trying to accomplish, and what they had to say:

Several phrases were chanted during the protester's march downtown, but this one, with women shouting the first part, and men repeating, felt especially powerful. Trump and his administration have made it very clear that one of the top priorities of his presidency would be to cut funding from Planned Parenthood, virtually taking away many women's access to necessary to reproductive health care.

Another powerful chant during the march, many protesters sought to remind bystanders and Trump supporters of the First Amendment, especially "the right of the people peaceably to assemble, and to petition the government for a redress of grievances."

One of the more popular chants, and signs, during the march through D.C, was "No Trump! No KKK! No Fascist USA!" Although there was the occasional changing of the word "no" to a more extreme expletive, the chant still held a particular sense of power, in recalling the KKK's approval of Trump and the tendency of Trump to refuse to acknowledge racist remarks made by himself, or his supporters.

No matter how many issues protestors wanted to tackle with the demonstration, the overriding theme of the march, and the feeling that completely overcame me, was that we were standing up for what we believed in. Complacency wasn't an option for anyone protesting, and we were all standing together.

There will always be outbreaks of violence when large crowds, extreme intensity, anger towards an administration, and passion for justice are involved. But the worst forms of violence come when we suppress those voices, and homogenize them all as being rioters.

Don't get distracted by the violence, because the point of the protests was for peaceful unity, and it should remain so.