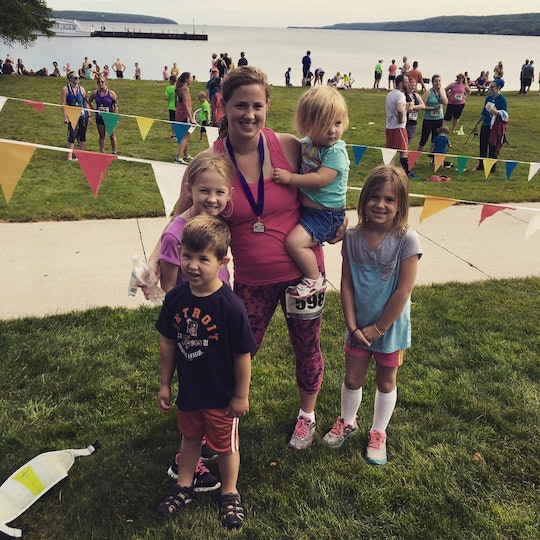 Two weeks ago, I crossed something off my bucket list: I ran my first-ever half marathon. I've always loved running, but my running style is more "slow and steady finishes the race" rather than any type of pace that could ever be considered speedy. But even though running used to be a part of my life, after having four kids in six years, I've found myself at a weird place. Quite frankly, I don't really feel grounded, if that makes any sense. Every single part of my life has changed, from my entire body to the first thought I have when I wake up and go to sleep at night.

In lots of ways, I feel like I've lost myself a bit in motherhood. In good ways, of course, but also in ways I can't really name. Since my fourth child was born two years ago, I've been working especially hard to feel comfortable in my own skin again, without any real results. I work out almost every single day and try to eat foods I find healthy, but I'm nowhere near where I want to be. I've felt like I'm kind of floundering, stuck in limbo. So setting a goal to run my first-ever half marathon helped me to have a goal to visualize, a benchmark of progress and success, and perhaps most importantly, a milestone that would help me feel like me again, despite what my body looks like.

I ran the race with my 21-year-old sister, who is basically a fitness model, as well as some family friends and veteran runners who kick some serious butt in the world of running. They've provided me with plenty of inspiration for a life of fitness and good health after kids. In the picture above, I'm the one in the pink, and my sister is the one on the far right in the purple top. See the woman on the far left next to me? She's 63 and runs like the wind. She also won first place. I did not.

To train for the race, I didn't do anything fancy. I knew that if I started to overthink it, odds are I would've psyched myself out, got nervous, and more likely than not, injured myself in the process. So I just told myself it was just for fun — something I wanted to do for myself — and ran three to four "short" runs during the week and a longer run on the weekends. I had three weeks to train and ended up running a five-mile, a seven-mile, and a nine-mile "long" run before it was race day. I took every other day off from running and continued weight-lifting to try to make sure I was well-rounded. Once I'd run nine miles, I felt ready, but I was still incredibly nervous. I had no idea what to expect and quite frankly, I feel like I'm not someone who looks like a runner, so I felt out of place from the beginning.

In running this race, I finally learned a lesson I'd somehow forgotten throughout all these tough years of motherhood.

But on race day, my sister and I started out strong, despite some technical difficulties. My headphones snapped right in the jack on my phone and her MP3 player mysteriously erased all of her music, so I put my music on speaker like the kind and loving older sister that I am, ignoring anyone who may have been annoyed by me blasting a little retro LFO for two straight hours.

As I ran past them, they'd look up, not breaking a smile and warn, "Beware of Stink Hill," like they were those creepy kids in a horror movie.

It was awesome to run with someone, although it should be noted that my sister despises running and had only ran precisely four times to prepare for this race.

Around mile six, the fact that I'd actually prepared kicked in and I left my sister in the dust. I felt kind of bad about that, but when you have seven miles to go, you have to listen to your body. And my body was telling me to ride that wave of extra adrenaline, so I did. I felt great, despite the fact that it started to get super hot and I started to get major chafing underneath my arm.

There were a few awkward moments between the miles of seven and nine when I was trying to strike up conversation with the runners next to me and things would suddenly get competitive and we'd be doing that weird thing when you're trying to talk but also trying to kick each other's butts, speeding up slowly and trying to act casual about it. I couldn't think of a subtle way to ask anyone else if they too, had delivered a human being from their bodies and then tried to pick up running, so I just kind of sprinted up behind people, heavily breathing and sweating a little on them, then gasped out, "So, do you have any kids??" Strangely enough, I did not make any new friends, nor did I happen across any fellow young mothers.

But regardless, on my merry Frankenstein way I continued until I hit the markers near mile 10 and then the mood of the race shifted entirely. Where there had been a few stray race volunteers out in the road directing our way, there suddenly were tons of them, standing solemnly watching us run by. As I ran past them, they'd look up, not breaking a smile and warn, "Beware of Stink Hill," like they were those creepy kids in a horror movie.

My time may not have been impressive, my form may have not been perfect, and my arms may have been chafed, but let me tell you what — none of that mattered to me or to the four little people who watched their mom run all summer and cross the finish line giving it everything she had.

I started to get a little scared and tried to get some answers. "Stink Hill, you say? Why do they call it Stink Hill? Should I be worried?" but they just stared back at me with blank expressions. Unfortunately for me, it soon became apparent what exactly Stink Hill was and why it inspired horror movie-esque reactions. I think I may have blacked out during the first stink hill, it was that horrific, but I managed to stay alert long enough to snap a picture of the second one. Essentially, Stink Hill was a series of mountains topped with sand. I'm not sure which was worse, going up them or trying not to literally wipe out on the way down.

While I'm still not sure exactly how I made it through Stink Hill alive, the nice part about it was that once we exited the woods, miles 11 and 12 were done and I had only one blissful mile left. I started to feel that surge of excitement again now that I was almost done. Gone was the fear that I wasn't going to make it and in its place was the tremendous pride that in a few short minutes, I'd be an official half-marathoner. That last mile was one of the happiest of my life and I was so delirious with happiness I accidentally ran completely off-course, which caused mass panic around the race organizers, but once I found my way back, I sprinted like my heart depended on it.

My daughters are already talking about the first race they'll run later this summer.

My time may not have been impressive, my form may have not been perfect, and my arms may have been chafed, but let me tell you what — none of that mattered to me or to the four little people who watched their mom run all summer and cross the finish line giving it everything she had. And for that, I couldn't be more proud.

My daughters are already talking about the first race they'll run later this summer and I love seeing their excitement to get out there and enjoy something they love. In running this race, I finally learned a lesson I'd somehow forgotten throughout all these tough years of motherhood: that it's not about what you look like, how fast you are, or how you good you are — it's about setting a goal, working hard, and loving the body you're in for exactly what it's capable of. I hope it's a lesson my girls never forget.