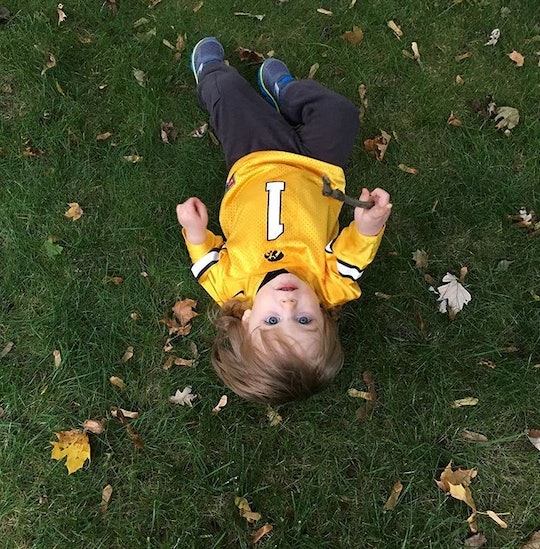 I Was Devastated When I Learned My Baby's Gender

I’m a girl. (I mean, technically I'm a woman, but do we ever really stop seeing ourselves as girls?). I have navigated this Earth as a female-bodied person since the day I landed. So when I pictured myself pregnant, there was never any question as to the gender of the baby I'd be having. Obviously, I'd have a little girl, and she would be just like me.

I imagined a little girl with my dark hair and my brown eyes, someone reminiscent of my mother and my niece, someone both totally new and totally familiar at the same time. Although I had strong feelings about the baby's gender, my husband didn't particularly care. Every time I mentioned the baby's gender, he'd say, "As long as the baby has ten fingers and ten toes, we're good." But from my perspective, raising a child sounded difficult and scary no matter the gender. It seemed a lot less terrifying to raise a new person that I felt like I already knew.

That's why, when I found out I was having a boy instead of the dark-haired, dark-eyed little girl of my dreams, I freaked out a little bit. And by "a little bit," I mean I freaked out a lot. I didn't know anything about what it was like to raise a boy, and I didn't particularly like little boys, either. How was this possibly going to work?

I was in the car when the nurse called to tell us the gender of our child. We had decided to find out the gender beforehand instead of being surprised. I knew that if, by some odd stroke of luck, I was pregnant with a boy, I would need some time to sit with that information and make peace with it before he arrived. I wanted to indulge in my sadness before I had the opportunity to see his face.

Part of me knew I shouldn’t let the nurse tell me. She offered to call back and leave a voicemail that I could listen to later, with my husband, so we could learn it together at the same time. But I decided to take a leap into the unknown and find out, right then and there. I took a deep breath in, and when I drew the breath out, I commanded her to tell me at once.

I sat in a ditch for twenty minutes, scared to drive home, scared that I wouldn’t know how to love a boy.

“I’m ready,” I said, steadying myself at the steering wheel.

“Tell your husband to buy a football,” she responded. Before I had a chance to rant at her about the gender stereotyping at play, I hung up the phone, too shocked to say anything.

I called my husband from the side of a country road, where I had pulled over to sob. I screeched into the phone. “IT’S A BOY!!!” I screamed. “A BOY! I’M HAVING A BOY! OH MY GOD OH MY GOD HOW COULD THIS BE HAPPENING THAT I’M HAVING A BOY?????”

My eyes were so blurred with tears that I thought my contacts had fallen out. I sat in a ditch for twenty minutes, scared to drive home, scared that I wouldn’t know how to love a boy.

I was worried he’d hurt girls with words he’d pick up from other guys at school. I was worried he wouldn’t know how to talk to me or to others, because as a society, we tend to not place importance on men expressing their feelings.

I was worried that he’d torture things, just as I’d seen my brothers do outside while we were growing up. A frog here, a beetle there – or just each other. I was worried he’d hurt girls with words he’d pick up from other guys at school. I was worried he wouldn’t know how to talk to me or to others, because as a society, we tend to not place importance on men expressing their feelings.

My husband didn't understand my intense reaction to the news, but I knew I needed to tackle this fear head-on. So the next day, I called to set up a therapy appointment. I walked in and told the therapist what I had realized: that I was scared to raise a young man in this world.

My therapist and and I worked on this issue together for a few months. She tried to get to the root of the issue, and we talked about my past so we could fix my future. I realized that my father had been an angry man, so I had learned to avoid and fear men from the very beginning.

Here’s the thing. We aren’t given children so that they can be just like us. We are given children to challenge us. To teach us. To show us the world differently, and to alter our perception of it. To tilt the world on its side.

I wanted to have a girl because I thought it would be easier, because I was a girl once myself. I pictured her as an extension of my arm or leg. I thought she would be a spitting image of me, both physically and in spirit. I assumed she would be quiet and good, as I had been when I was young and too scared to hurt anyone.

But qualities like quietness and goodness aren't restricted to a single gender. I realized that my desire to have a girl stemmed from the same place that prompted the nurse to tell me to buy my son a football when she revealed the gender to us. I was unduly influenced by gender stereotypes, and those stereotypes were wrong and unfair.

Spending time in therapy helped me realize that I didn’t have to know how to love a boy. I needed to learn how to love a child. How to love a little being – regardless of its gender or its temperament.