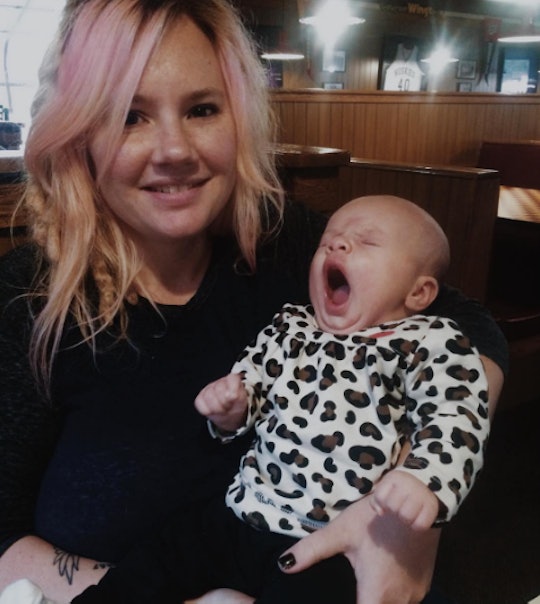 My hair has always been a major part of my identity, and it wasn’t any different during the lead-up to the birth of my daughter. During my pregnancy, I wasn’t planning on getting a postpartum haircut like I had heard of many other women doing, and I was going to do everything in my power to avoid “mom hair” — whatever that is. I also didn’t want to subject myself to the ridiculous unwritten rule that once you become a mother, you can’t have long hair.

During the two years before my daughter was born, I had been growing dreadlocks. I had every intention of keeping them for the foreseeable future, because this particular hairstyle opened up a part of me I had never explored before. During my second trimester, however, I was already feeling like I wanted a bit of a change, so I home-bleached my locks.

After 2 and half months of newborn life, I became frustrated with my dreadlocks, especially because they’d get in my way while nursing. I wanted to relish the opportunity to pamper myself, so I decided to get a new haircut. Plus, a fresh new haircut seemed like a great way to commemorate such a major life event.

I went for a jazzy, asymmetrical pixie cut, and at first I adored it. I think that was mostly because I got a wildly popular response to this look after posting a photo of it on social media. (Seriously, I got almost as many likes as I did on the first pictures of my newborn in the hospital.) Still, I wasn't quite satisfied with my new postpartum haircut.

While it made me feel good to get so much attention for my haircut, it wore off soon enough, and I was back at the hairdresser's a month later to go a bit shorter. I didn’t want to spend the extra money on top of another cut for a proper salon dye job to touch up my roots, so I did another home-bleach effort. Admittedly, it gave me a two-toned look, but I felt I could live with that. Rock it, even.

The new color only lasted for another month or so, and I didn’t want to keep having to bleach my hair, so I went another color entirely — a deep brunette that seemed okay in the beginning, but quickly faded into a muddy brown as my natural auburn started to reappear. By this time, I didn’t want to maintain the pixie cut. I just wanted long hair back. I also wanted my natural color again, even though I'd had a lot of fun switching it up.

Every time I looked in the mirror, I couldn’t see myself. Instead, I'd see some odd version of myself, trying desperately to find the beauty I once recognized. It was the weirdest thing: the changes in my body like weight gain, saggy-feeling boobs, and a stretch-marked, flabby tummy didn’t matter. The loss of my love for my hairstyle was what crushed my sense of self, and I didn't like that.

Every day, I reminded myself how silly it was to feel so traumatized by something as trivial as a change in hairstyle, especially because I know there is so much more to my worth as a human than what my hair looks like. If I could overcome the postpartum body transformation, why couldn’t I get past my hair situation? Every day, I’d run my comb through my mane and just couldn’t shake the dissatisfaction. There was nothing I could do but wait for my hair to grow out and remind myself that that feeling would pass.

After my daughter’s first birthday, my hair had almost completely grown out, and my cousin, who is a skilled hairdresser, came up with an idea of what to do with the mop on my head. I got some slick new bangs for a mod bob, and it was as if the heavens had opened up. My hair is still short, but my natural color has fully returned, and I’m in love with my hairstyle again.

While it might sound silly that so much of my self-worth was bound up in my hair, I don't really care either way. After you undergo something as physically demanding as childbirth, I think it’s OK to have that one thing (or a whole lot of things) that make you feel good on the outside.