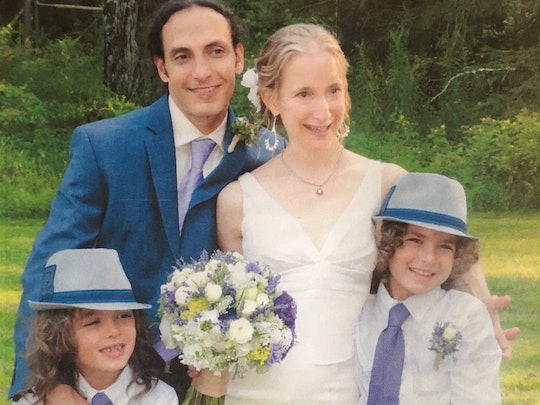 These Are The Vows I Recited To My Step-Sons

When I thought about what it meant to marry someone whose dragged out and contentious divorce was newly finalized, it was his two kids, then 6 and 8 years old, who loomed largest under my mental trellis. After our wedding day, I would officially be their stepmother (or the nicer-sounding bonus mother, or the French bon mere). I wasn’t just marrying my partner, I was in practice saying my vows to my stepchildren, who would share their lives with me from then on.

Call us steppies what you will, the tired fairy-tales still depict us as opportunistic moral blackheads, and weddings as a heist. I wanted the children’s participation in our ceremony to bless and fortify our passage forward as a family, but not be too weird of a ritual for them to do willingly.

The boys had helped us build the canopy under which we would stand to take our vows. It was wobbly construction, but not wobbly enough to be negligent. We designed and assembled it one raw spring day out of fallen tree branches, dragged from the Stone Ridge woods behind the friend’s home upstate where we’d have the ceremony. The labor was hard enough that jackets came off. A blended family is like that: a bunch of collected parts, under non-standard architecture.

Many children, given a chance, love to use dangerous saws and axes; but how much could they, or should they, love having a new parent figure? How public *should* that love be? Would taking vows to my stepkids, as I was strongly considering doing, be an appropriate representation of my commitment, or something off the mark?

I knew what their mom might say about it, because she made no secret of her views. She repeated to them and to us that I was not their real family, their blood family, and blood was all that mattered. Her denotation was tight. For example, in her opinion, I was not to come to the the elementary school’s “Family Friday” held once each month for, you guessed it, students’ “families” (though the school didn’t say anything about “blood”). At such a limited definition, I cringe for so many families made of bonds beyond biological. But this was the insistent counter-messaging we were up against as we looked to say on our own terms what, who and how we were.

Friends weighed in, too, about the big picture:

Watch out! Friends said. Divorcees are messy! (Agreed, but it’s the situation, not the person. Have you ever had a nice, clean break-up?)

His kids will always come first (Yes, right, don’t they, shouldn’t they, don’t yours? Would it be cool if they didn’t?).

Watch out! Friends said, aren’t you worried he has kids *already*?

Worried? No. I was a little ecstatic, actually. The preview of his daddy skills and daddy devotion was one of my favorite parts about becoming intimate with, and then choosing to marry, my husband. He was Daddy first, available partner second: I saw his kids’ picture on his iPhone before anything else significant, like his naked body or beat-down bank account.

I wanted them to know that I took their part in the new relationship status as seriously as I did my husband's.

Also, we hoped my womb would be open for business shortly after tying the knot. How many would-be moms get to witness their partner at parenting before it’s go-time for your own, and feel great about what you see?

Sure, many guy partners play with a friend’s baby — and then hand it back when it cries, farts, or looks at them sideways. That was exactly when my husband REACHED for the baby. Given that, I wanted his sons to know I would extend the same: when it was not fun, when it was not copacetic, that was when we (like married people must do, even though, of course, I was not marrying them technically) would lean back into a bigger promise to one another. Or at least from me to them.

Here’s the thing: No baby makes a promise to its parent when it’s born. It’s just trying to figure out what was going on, newly delivered and dealing with AIR NOT WATER MY GOD, how to uncross its eyes, where all that light is coming from. This wedding marked the “birth” of me as their step-parent, and a next-level of involvement in their lives forever and ever. So I wanted it to be clear that that was the kind of love I could extend to them: you don’t need to promise me anything back, or have words for what this is. You don’t need to defend that I am or am not your family. You don’t need to be able to uncross your eyes, when sh*t gets hairy. I got you. This love thing is bigger than us.

It was a tricky decision to vow to them because I exactly didn't want them to feel obliged to vow anything back — right? A wedding is a two-way street between partners, but when that partner comes with kids? They weren't the ones to propose to you, they didn’t pick the relationship over eHarmony from thousands of profiles — and nothing is more gag-factor than kids feeling obligated to love "back."

Still I wanted them to know that I took their part in the new relationship status as seriously as I did my husband's. If I was going to have the bonus-mother standing with them, they were going to have a moment to mark its formal inception and know what it meant to me.

They wanted to participate in the ceremony, too — my younger stepson, Q, would recite a poem he’d chosen from Cookie Monster that ended deceitfully He did not generally like being the center of attention, so he practiced locking eyes with our warm officiant, and delivering the poem with the same relish he’d use to eat that last cookie.

“Sometimes me think what is love,

and then me think love is what last cookie is for.

My older stepson, K, would recite the last stanza of Snyder’s poem,

“As the crickets’ soft autumn hum

so are we to the trees

to the rocks and the hills.”

(The rest of the poem is a rather grotesque critique of Amerika.)

Who doesn’t want to be connected to — or a poetic extension of — the rocks, the hills, the trees? A marriage is part of all of that, right? What about a second marriage, is it just as seamlessly holy? Moreso, children are — they come from that indivisible place, like a meteor from space, and for a long time retain a connection with “the natural world” that too many adults have since obliterated from our concept of ourselves. For a moment, getting married, we remember the ultimate childlike union with everything. And we let the kids know that we adults are not as dense and disconnected as we sometimes all behave.

Given all that, is divorce unnatural? Is remarriage? Is the bond with a new parent figure?

It seemed important to have written by hand, the way you would leave a note for a kid on the counter telling them to remember to bring their lunch to school.

I went back and forth all the way up to the hours before the processional, whether a vow to my stepkids was appropriate or excessive. After all, they “knew” I loved them. I knew the internet, which is not your grandma, would have all kinds of opinions on both sides of the fence, so I didn’t look up my burning questions.

Instead, I went “downstairs” to the totally free but sometimes a little garbled counselor in my own heart, and asked what I should do and how I should do it. This isn’t easy, become sometimes your fear hammers out a reply in Morse code. But other times, if you are quiet and sincere and bring baked goods, your heart tells you something of use. That wedding morning, mine did.

That very day, taking some deep breaths and doing some serious cutting of wordiness, I chose my vows. I tucked them into my dress, or that’s how I remember it, hoping sweat and tears would not dilute or render unreadable the original sentiment. In vows, wording is everything, which is torture for the writer, and maybe even worse for the stepmother. It seemed important to have written by hand, the way you would leave a note for a kid on the counter telling them to remember to bring their lunch to school. My officiant didn’t have them. Only I had them.

I bent down to their height:

I vow to love you with all my heart

To be your ally

To learn from you

To listen to you

& to be sure you eat your veggies

To help you be most fully in the world

The person you wish to be

To treasure your individuality and independence

(I don’t remember if I said those last three lines, but I remember the veggies. Boy do they wish I’d left that off).

Their f*cking beautiful faces stared at mine.

As a stepmother you want to stay in your lane; to be respectful — of their parents, but also of how complex relationships can be, of how much children can be feeling without sharing.

But the problem is, love doesn’t really have a lane. And so you’re better off letting love show you how to create a new one, with its impressive biceps and jackhammer. When I said those words, they felt right all the way into my bones, my common denominator with all things living. And I could see in the eyes of my stepchildren, who would remember this night in clear and cloudy ways, that they had laid a road down we could walk together.