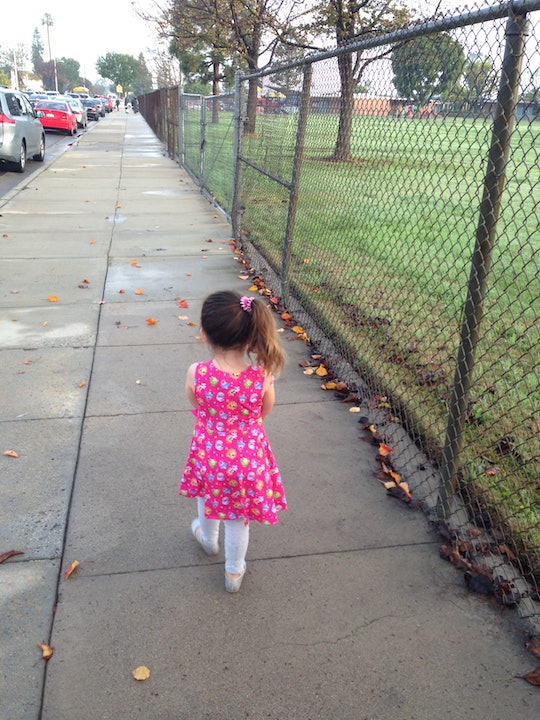 I Won’t Force My Daughter to Make Friends

In my first two years of being a mom, I believed it was my job to find friends for my daughter, so I'd arrange play dates for her. If she didn't become instant buddies with the girl she was on a playdate with, I would be tremendously disappointed, and I'd apologize for her aloofness. But I shouldn't have apologized for her, and I no longer do, because I don't want to force my kid to make friends.

Even for grownups, arranged friendships are the worst. Not only are you forced to be friendly to another person, but there is added pressure on you to find something in common with this person, because everyone wants you to become good friends. This applies doubly to children, who are often forced into social situations with total strangers.

One time, I arranged a play date for my daughter with another toddler who I assumed would become her BFF, because they both loved Elmo and princess songs. But just because they had those things in common didn't mean they'd be buddies. And after three play dates, it became clear they just didn't get along.

My daughter had the guts to be honest and admit that things just were not working out.

Toddlers don’t care what anyone else thinks about them; they tell you exactly how they feel and give no fu*ks about offending anyone. My daughter would scowl at this little girl and tell her she wasn’t her friend, and she'd throw a fit when I asked her to play nice. "I just want to leave," she'd say. Yes, she was being rude, but you know what? I wanted to leave just as much as she did, because I had absolutely nothing in common with the other girl's mom.

Eventually, I realized that I was forcing my daughter to befriend this little girl because I was also trying to force a friendship with her mom, even though I didn't even like that woman, either. I was placing my daughter in the same awkward situation that I was in. My daughter just had the guts to be honest enough to admit that things were not working out. It’s amazing what our kids can teach us about ourselves without us even realizing it.

After that failed matchmaking attempt, I stopped arranging as many play dates for my daughter. Now I know she is not only capable of making her own friends, but she also specifically asks me who she wants to make playdates with. She tells me who she plays with at school and who she wants to invite to her birthday party. Of course, these little friendships ebb and flow over time, but somehow, she manages to maintain most of them without my interference. All I can do is ask questions about her friends: what she likes about them, what she doesn't like, and what they like to do when they are together.

Life is short and time is valuable, which means we shouldn't spend an afternoon trying to force our two kids to be friends. What's the point in making small talk when all we really want to do is spend time with people we actually have a lot in common with?

When I receive a birthday invitation from one of her classmates or friends I’ll always ask if she wants to go to the party before I RSVP. In some cases, she’ll say, “Sure, I love that person," or “No, I don’t want to play with him.” She doesn't say "maybe" or "let me think about it." And to be totally frank, I admire her honesty.

The same goes for parents who reach out to me for play dates: if my daughter does not want to play with your kid, I’m going to decline that play date. Nothing against you or your child, but we all know that life is short and time is valuable, which means we shouldn't spend an afternoon trying to force our two kids to be friends. What's the point in making small talk when all we really want to do is spend time with people we actually have a lot in common with?

It took a few failed arranged friendships to help me realize that forcing friends on my daughter was not doing either of us any good. But once I backed off and allowed my daughter to make friends on her own, her social circle grew, as did mine.

Before my daughter was born, my social circle consisted of only a handful of close friends. Now I have many mom friends, thanks to my daughter becoming more outgoing and befriending their kids. And while I’m still getting used to meeting new people during these play dates, it makes me proud to have a daughter who is true to herself and is capable of making friends on her own. Because life is too short for fake friendships.

More Like This
Real Parents Share What Time They Let Their Kids Rip Into Gifts On Christmas Morning
The 35 Top Toys For 3-Year-Olds
Festive Mommy & Me Holiday Nail Ideas To Try
101 Advent Calendar Activities, From Books To Read To Cookies To Bake