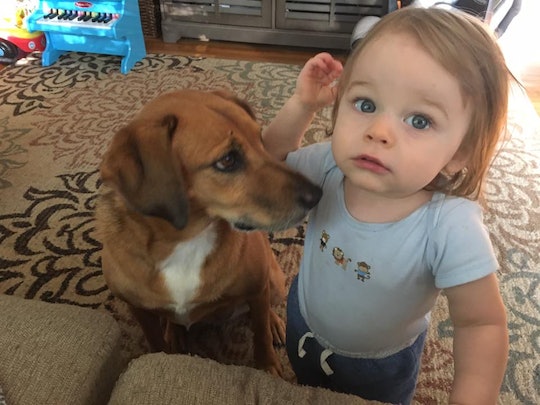 I'll Never Tell My Son To Smile For Photos

I have more than 13,000 photos on my iPhone camera roll. While I'm not going to scroll through and count them them all one by one, I’m willing to bet that at least 12,000 of those photos are of my son, Oliver. Every single time he laughs or walks or jumps or smiles or points or claps, I cannot resist picking up my phone and taking a picture of him.

There isn’t one photo in that entire stack, however, in which my son is smiling at the camera. Every last one of these photos are candids. That's because I have never told my kid to "smile" for the camera, not even once. And I don't intend to start now.

Every photo I have of him is proof of a moment that happened, not a moment that I staged. I've captured him hitting our dog, petting our dog, throwing the ball for our dog, and kissing our dog. I have never once told him to stand near our dog and put on a happy face for me. I want to use the camera to capture the incredible tiny human life unfolding before me, not to direct it.

My response to the command has never been to automatically upturn my mouth muscles. Instead, I'll simply tell someone: "I don't want to smile." Then I'll turn my heel and walk away. I don't owe anyone anything, and I won't feign happiness for them. I won't fake anything for anyone. And I don't want to teach my son that he has to, either.

I don't owe anyone anything, and I won't feign happiness for them. I won't fake anything for anyone. And I don't want to teach my son that he has to, either.

I never thought my stance against telling my kid to smile for the camera was particularly unique. But recently, I was hanging out with other youngsters and their parents when someone started passing around a camera. Suddenly, I heard a parent call out, "Smile!" and watched a little girl whip her head around, throw her hands under her chin, and beam at the camera, as if on cue.

At that moment, I realized that I had never asked Oliver to smile for a photo, and that I never would. Because a smile should always be natural. It should always be a message from the body, a way of telling us it feels joy. We might fake a lot of things in life, but I don’t want him to ever fake that.

I want to use the camera to capture the incredible tiny human life unfolding before me, not to direct it.

But I am going to teach him to let his honest emotions be his guide. I don't want to ever dictate how his face should look. I want to teach him that his true feelings should guide his interactions with the world. I will tell him he can smile for photos – or for others – if he wants to, but that it better be his decision and it better be real — no faking.