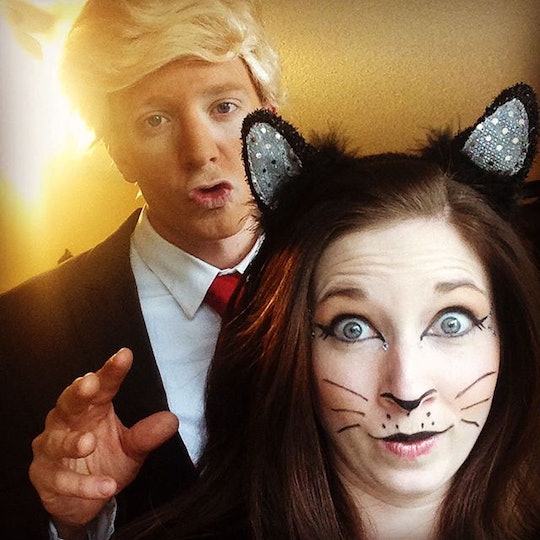 Why I Won't Talk About Trump In Front Of My Kids

Last November, as the election numbers began to take their tragic turn, my dad Skyped me to gloat about Donald Trump's victory. He'd spent the last few months on a steady diet of Fox News, and he felt confident that Trump was the right choice for our military, which, as an ex-Marine, was his highest priority. Because he didn't feel he had much at stake in the election, he found my abject horror at the prospect of a President Trump laughable. I hung up mid-conversation.

My 5-year-old son walked in the room. "Why is grandpa voting for Donald Trump if he's a bad guy?" he asked. Honestly, I didn't know how to answer. I can’t talk about Trump with my kids, because there is simply too big of a political divide in my family.

I told my son that some people didn't think Donald Trump was a bad guy. "In fact, all of your grandparents voted for Donald Trump," he said. I couldn't explain it to him in terms that would make sense, because it is something I am still trying to explain to myself: how anyone, least of all people I love, could do something so heinously and unequivocally wrong.

To an extent, I understood why my family members voted for Trump. They had always voted for Republican, and this year it seemed they had no intention of breaking the pattern. But I'd always hoped they'd make an exception for this one candidate. In my opinion, never had there been such an unqualified candidate, such a horrible human being, such a clear-cut wrong choice.

During the election season, I didn't know if I should talk to my kids about Trump. I wanted them to understand the historic significance of what I'd hoped would be a celebratory moment in American politics, and I also wanted to shield them from the ugliness of sensationalized debates with little substance and lots of name-calling. So I decided to choose the latter for their own good, and we barely talked about the presidential election in the lead-up to Election Day.

He asked me what it meant when the bad guy won.

"It means another good guy will have to beat him next time," I said.

When they did ask me about the election, I tried to keep it simple enough for them to understand, outlining the voting process (ironically, without the caveat of the electoral college). I told them, with sincere hope, that we might be electing the first woman to ever be president. That she had worked her whole life getting ready for this job. That she was smart and hardworking and would do her best to make good laws. I told them some people might vote for Donald Trump, but that their father and I wouldn't, because he wasn't very nice to people and hadn't worked very hard and didn't know how to do the job of being president. It was a big responsibility, and we wanted to choose the right person.

I didn't mention his well-documented degradation of women. I didn't tell them of the hatred he had spread across the nation for Muslims and immigrants. I didn't say anything about the mocking of a disabled reporter or the utter disrespect he showed to anyone who refused to pledge loyalty to him. Had I showed them even an ounce of Trump's character, my kids wouldn't have been able to sleep at night. They would have been worried that a D.C. super villain was about to take up residence in the White House.

The next morning, my son was anxious to know who had won. I told him, unable to hide the fact that I was sad about the result. Devastated. Crushed. Utterly disgusted. Filled with rage. I cried all the way to school and all the way back. I spent the day with his sister signing up for volunteer work, trying to put some light back into the world on what seemed an incredibly dark day. He asked me what it meant when the bad guy won.

"It means another good guy will have to beat him next time," I said.

I told him that hopefully Donald Trump would do a good job. That maybe he wouldn’t make bad laws (no matter how little I believed this to be true). I told him that people would have to do extra good things to make up for him being president. And then I closed that chapter of conversation and we’ve avoided the topic of Trump ever since.

I don't want my kids to think their grandparents are bad or evil because they voted for Trump, even as I wade through my own complicated feelings about their political choices.

There is no way I've found to explain how our own family could have contributed to such a horror. I don't want my kids to think their grandparents are bad or evil because they voted for Trump, even as I wade through my own complicated feelings about their political choices. I decided, after some time, that I did not want this to end my kids’ relationship with their grandparents, so instead we severed ties with Trump - making it a dirty word that could not be spoken in our house. My family understands and respects this rule. It's not just our own feelings and beliefs at stake anymore. The chasm created by Trump affects the people we love most.

I cannot talk to my parents or my in-laws about Trump, because it is the only way I can stop the rift from growing wider. I don’t want to put my kids in the middle of a moral fight with their grandparents. I want them to have those strong family bonds that I had as a child, to feel secure in the relationships that they have known since birth. I know that any mention of politics between myself and their grandparents will only end in turmoil for everyone - especially my kids. So silence is the best policy, the only policy, I can come up with. I wish I could say there was a way we could move forward, to speak about politics in a way that didn't affect our family relationships, but with Trump as our president, there simply isn't. Hopefully someday, when the kids are older, we can look back on this with more perspective, but for now, this is the only way to keep our family from falling apart.