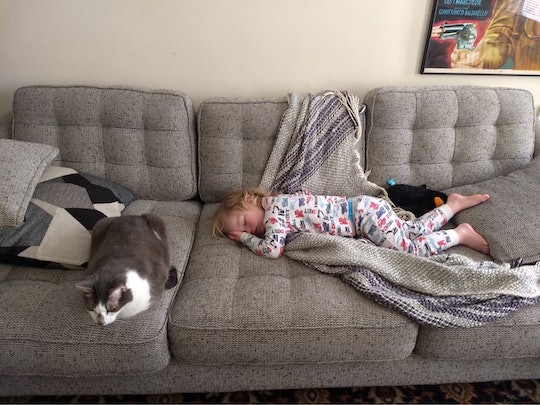 I Regret Not Sleep-Training My Kids

When I was a child, I had a terrible time falling asleep. I would lay in my bed until the wee hours of the morning completely unable to relax and close my eyes. The reason was simple: I was afraid of the dark. Specifically, I was irrationally afraid that a stranger — human or paranormal — would come into my room and kill me. This fear was so strong that just writing it out now has made my breath ragged and my heart pound. The only way I got any sleep at all was to eventually drag a thin futon bedroll across the hallway to pass out on my parent’s floor. I did this until age 13. In short: being alone at night was a nightmare. And I swore that my children would never have the same experience. Sleep-training my kids was out of the question.

Seventeen years later, I had a new baby of my own. Despite owning a crib and a bassinet, and understanding the risks of bed-sharing, my husband and I felt that it was the best choice. Not only did it allow me to get more sleep while nursing my newborn throughout the night, it seemed to be the only way baby Harvey would sleep at all. Just the feeling of the crib on his back would rouse him from the deepest sleep accompanied by screaming and tears.

I swear that I tried to get him to sleep alone, but not very hard. I was exhausted for months at a time and it always seemed easier to just cuddle and nurse him to sleep in the “big bed.” He remained in the big bed until his sister was born three years later. After the first night home from the hospital, nobody got a wink of sleep. Out of desperation I kicked Harvey out of our bedroom to sleep in the second bedroom. But since he had never slept alone it seemed too cruel to throw both a new baby sister and a new sleeping situation at him. So his dad slept with him.

At 5-and-a-half-years-old, Harvey still can’t fall asleep on his own.

Again, I tried to teach him to fall asleep alone, but not very hard. After all, I had a new baby with new sleeping challenges and it just seemed easier for the family to keep co-sleeping. And easier is often better when it comes to parenting! And despite all my coddling (or maybe because of if) Harvey was (and is) also terrified to be alone at night in the dark, even with nightlights.

Now at 5-and-a-half-years-old, Harvey still can’t fall asleep on his own. He doesn’t have any skills to call upon and the fear of being alone makes him hysterical. We’ve gotten to the point where he will fall asleep with us simply in the room as opposed to cuddling him, but we’ve got a long way to go. Bedtime is still very trying for all of us.

And I know it’s my fault. (OK to be fair — my husband's AND my fault.) Because the “cry it out” method just seemed like nighttime abandonment and nighttime abandonment was the greatest fear of my life, I’d never even entertained the idea. To be honest, I’d thought it was horrifying. But would things be different if I’d done it? Or cracked open Solve Your Child’s Sleep Problems by Dr. Richard Ferber? Or even just called up a sleep consultant and asked for help with an open mind? I can’t help but think the answer to all these questions is, “yes.”

In trying to save him from the night terrors, I’ve never helped him learn to be comfortable by himself in the dark at night.

Hindsight is 20-20. It’s easy as a person who now sleeps eight hours consistently to judge herself for not trying harder when she was only sleeping two hours at a time and struggling with new babies. But I feel that I’ve let my son down in a big way. In trying to save him from the night terrors, I’ve never helped him learn to be comfortable by himself in the dark at night. And then there’s my 2-and-half-year-old daughter. She’s a little more self-efficient — putting herself down to nap for example — but also without any skills to go to sleep at night on her own. If I start sleep training her now is she old enough to remember and be damaged by it?

The new fear that keeps me up at night? That I’ve totally f*cked this all up.

While it’s easy to sit here and wish desperately that I could turn back the clock and approach sleep in a different way, there is one thing I can still do: ask for help. In fact, I got the name of a sleep consultant from my co-worker today and I’m going to set up a phone call soon. Regret is a nasty emotion, but its only made worse by inaction. My kids depend on me to keep them safe and teach them how to live well. And while sleep is still a struggle, I’m pleased to say it’s one of the only struggles they experience. Both Harvey and Mabel are smart, happy, healthy and independent. Because of that, I know that my husband and I are doing a lot of things well.

Now it’s time to face my fears and try make the nights a little less difficult, for all of us.

More Like This
Why It's Crucial to Get Good Sleep As A New Mom — Plus, Tips On How To Do It
New Infant Safe Sleep Guidelines From The AAP Discourage Bed-Sharing
30 Easy Summer Activities For Kids That Work Rain Or Shine
Festive Fourth of July Sparkler Crafts