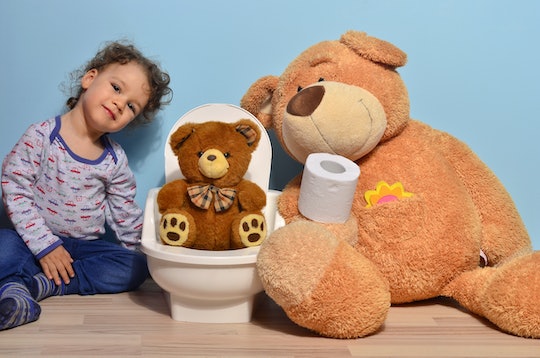 I Rushed Potty-Training, & We Ended Up In The Emergency Room

I used to humbly brag that I couldn’t find underpants small enough for my oldest daughter, who was completely potty trained by the time she was 18-months-old. Training her took 24 hours and simply consisted of me showing her the toilet and plying her with candy.

So when my next child was 18 months, I put aside a day in my calendar to train her as well.

All the books, the doctors and the other parents like to tell you not to potty train your child until he or she shows signs of being ready: staying dry for long periods of time, asking questions about the toilet, et cetera. But never mind them, I thought. I know what I’m doing. After all, I’ve done this before.

She said she didn’t have to go, and promised that she’d tell me if she did, and off she went running through the house, her pudgy rear end swaying as she moved.

Two minutes after she jumped off the potty seat, she had her first accident. It was OK, I reminded myself through gritted teeth. Accidents happen. We started again. It happened again. It didn’t matter how long I’d keep her fixed to that potty — as soon as she got off, she’d have an accident.

By day 2, my patience (I completely admit to having very little patience) was wearing thin. I didn’t understand why she was refusing to go in her potty seat. She understood the concept, but was doing exactly the opposite of what I was requesting of her.

We continued, but instead of reminding myself that accidents happen, I began yelling at her whenever she had one.

It was now day 3, and we were no further along than when we started. We hadn’t left the house, and I was cursing all those “three-day potty training” methods, all those self-righteous Youtubers who seemed to magically train their newborns.

On day 4, I was encouraged. There were no more accidents. But still no pee in the potty. WTF. Where was the pee?

It turns out that withholding poop is common; withholding urine is not so common. But it’s still a major problem, and it’s also known as dysfunctional voiding. He suggested that I take her to the emergency room.

I had just scared her so much that she was too terrified to go.

From a potty training malfunction? Apparently, it could lead to a urinary tract infection at best or even a kidney damage if she wad really stubborn (she is). The ped said she may require a catheter until she sorts herself out.

I explained this to my baby. She didn’t care. I began to get her dressed for the hospital. I gave her back her diapers, pleading with her to just pee. Nope. She was scared pee-less.

Finally, just before we left the house, I popped her into a warm bath. And out it came.

Then, the timer was back on. We had 12 hours to get her to pee again until we had to repeat. This was the worst potty-training nightmare ever.

The pediatrician also recommended that we take her to a pediatric urologist at a children’s hospital to see if anything was blocking her pathway. Nope, that urologist told us. I had just scared her so much that she was too terrified to go.

I popped her diapers back on, and told her that potty training was over indefinitely.

Case closed? You would think, but no.

My yelling had caused my daughter to be afraid of going to the bathroom, and it wasn’t an easy fix. I had to beg her, plead with her to go. It was a daily, hourly process that took months to undo.

Even today, at the age of 7, she has a bladder of steel, and she doesn’t like to go in unusual places. She was potty trained at the age of nearly 4 when one day, she told me that she’d like to pee on the toilet. Done. No yelling, no fussing, no candy. It was simple. Perhaps she knew what she was doing from the very beginning.

More Like This
17 Best Potty Training Products For Toddlers
26 Toddler Lunch Ideas They’ll Actually Be Excited To Eat
I’m No Singer, But My Children Think I Am
Good Moms Have Abortions — I’m One Of Them