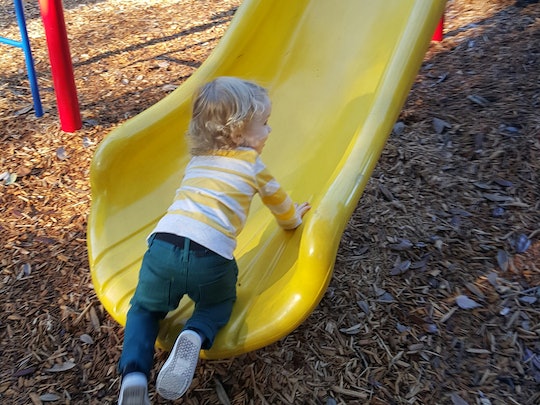 No. It’s the only word your child may say more to you than you do. In fact, “no” is my son’s favorite word right now. He’s 2 years old and is at that crucial and crazy stage where his desire for independence far outweighs his actual ability to achieve it. The number of times a day I hear, “No, I do it!” followed by exasperated grunts when he inevitably is unable to do it is ridiculous. God bless him, that boy is nothing if not determined. But sometimes his requests (or demands, if I’m being honest) require me to say “no” to my son unless I want a visit from child services. (Like, for instance, when he wants to stand on the table, jump off said table, and go to school without pants on.)

Lately I’ve been feeling like my son has become immune to the word, though. I even worried about his hearing for a hot minute before I realized that his tiny ears were totally fine; he was just obstinate. I actually love that he’s so stubborn. You could say the apple doesn’t fall far from the tree there. I’m thankful to have a child whose ambition knows no bounds because he will undoubtedly show fierce resilience in adulthood. But I’m not talking about the future. Right now, I’m wondering why my son doesn’t respond to my admonitions and if it’s because I’m just not saying “no” enough.