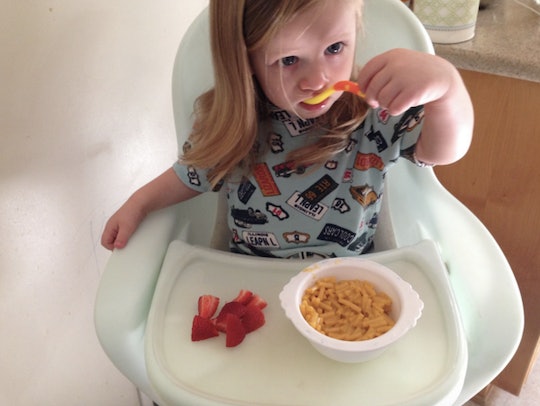 I Said "Yes" To All Of My Kids' Requests, & This Is What Happened

There are days when I feel like all I say to my kids is “no.” No, you can’t climb on that. No, you can’t eat that. No, you can’t jump off of that. No, you can’t play with that. No, no, no. Being a stay-at-home mom means I am the one who’s constantly enforcing rules and routine. It’s part of the job. If I didn’t say “no” on a regular basis, my house would quickly fall into chaos. But how quickly? Apparently some masochistic side of myself wanted to find out.

Like I said, I'm a stay-at-home mom, which means that from the time my partner leaves until the time he returns, the kids are on my watch. Sure, I'd love to say yes a lot more — yes, tear up the kitchen! Yes, destroy that roll of toilet paper I just put in the bathroom! Yes, you can have sugar for breakfast! — I'm the only one on the receiving end when all is said and done. If the house is a mess, the kids can help me clean, but leaving them alone with a ton of cleaning products and a mop and expecting a positive outcome is not exactly realistic. I love playing around and being silly as much as the next woman does, but there are times when I can't say yes, and when I have to say no. Will my kids grow up thinking I was too strict? Who knows. Will they wonder why I said no so much? Maybe. But then I had a genius thought: What if I said yes to every reasonable request my three kids made for the course of 24 hours? (OK, my third child, who is an infant, could not feasibly make requests, so it'd be up to my other two kids to make the demands — I mean, requests.)

So, I decided to become a “Yes Mom” for a day. Anything my kids requested, all day long, the answer was “yes” (so long as it didn’t bankrupt us or physically harm anyone). I figured a day would be plenty of time to plunge into chaos. The thought of doing it any longer seemed impossible and even more insane than what I had already signed up for. They would quickly catch on and start demanding crazier, more elaborate things. Over the course of a few days, I’m almost certain, it would have become total anarchy.

From our early wake-up to late bedtimes, here’s what happened when all requests were fair game for a day:

We Watched A Lot of Netflix

At 5:30 a.m., I was roused awake by my daughter whining at her door that she wanted to wake up for the day to watch TV. I immediately regretted my decision to become a Yes Mom. I fell asleep on the couch with the baby after putting on Netflix at her request, until she came over and asked mama to wake up. As you wish.

At some point during the early morning, my son woke up also. He also wanted to watch Netflix. (Surprising? No.) So for a couple minutes they watched Netflix together. Then Avery, my daughter, decided she wanted to watch Netflix on my tablet in my bed. So I let her, which meant my two children sat in separate rooms and watched the exact same show on Netflix. Ridiculous.

Whenever there was a lull in excitement, they both turned to Netflix, which was nice for me, because I needed a break amidst the madness. God bless Netflix.

We Followed a Ridiculously Unhealthy Diet

I didn’t ask my kids what they wanted for breakfast. I suggested oatmeal or waffles or bagels, but my son immediately countered with macaroni and cheese, which was met with loud approval by his sister yelling “MAC AND CHEESE!” and waking the baby. I put in less butter than usual, gave them some strawberries on the side, and called it healthy-ish. In a way it was almost kind of awesome that my kids wanted mac 'n cheese for breakfast. To be honest, there are mornings I wake up wanting something that I know I totally shouldn't have.

Later, at Costco, they demanded we buy a bulk box of Fruit Roll-Ups, a flat of peaches that will rot before we eat them, and a giant box of gluten-free seed crackers, which (surprise!) no one actually wanted to eat once we left the store. For lunch, they picked up ice-cream sundaes from Costco and we brought home pizza for lunch. When it was time to eat, the ice cream obviously came first, because, priorities.

Snacks consisted of as many Fruit Roll-Ups as they could jam into their mouths before dinner, which really couldn’t be called “dinner.” It was a few bites of chicken nuggets followed by ice cream. Because again, priorities.

My iPhone Was No Longer Mine

My daughter decided to snuggle up next to the baby and asked for me to take her picture. Normally I wouldn’t do this because “take a picture” is code for, “I want you to bring out your iPhone so I can steal it.” Which is exactly what happened.

Thank God I had an Otterbox on it, because it disappeared for many, many hours, and came back very, very sticky. I didn't even bother asking what happened.

We Played Outside ... A Lot

After hours of mind-numbing Netflix, my kids finally decided to go outside. My son requested he wear pajamas outside. My daughter demanded no shoes. What was I do to do? Say yes, obviously. She repeated “no shoes?” three more times to make sure she was hearing me correctly. It was her way of saying, “Yes? The answer is yes, Mommy?” Yes.

There was peeing in the grass and sand throwing and a number of things going on that normally wouldn’t fly had I not been a Yes Mom for the day. But honestly, it was kind of nice not patrolling outside time like an armed guard. I turned my head the other way and made them work out fights on their own. No one got too hurt, so I would call that a success.

We Ditched Nap Time For A Pool Party

In the afternoon when they should have been napping, they decided they wanted set up a giant tent in the backyard, and put our pool inside of the tent. It was great fun for a few minutes, until a bee flew in and all hell broke loose and everyone nearly drowned in a bee-fueled panic.

If that sounds overdramatic to you, trust me, it was.

A lot of the day consisted of simply playing together. I realized how often I’m guilty of saying I’ll come to play with them just as soon as the dishes are done or the laundry is folded or I’m done sending this email, and then I forget to come play.

Even when I had to drop everything to play at their request, I was still able to get things done around the house. The stop-and-go may have been frustrating, but it was worth it to go pretend camping and stare up at the stars on my son’s ceiling while they made me fake coffee to keep me awake.

We Wrote A Note To Santa

Because, and I quote, “Winter is coming.”

We All Had Epic Meltdowns

After a dinner that consisted mostly of ice cream, things took a turn toward the worst. I think the lack of boundaries became more than either of them could handle. (It was certainly more than I could handle, which is why I spent a few minutes hiding in my room with a glass of wine.) My son raged at his Legos for not cooperating.

My daughter proceeded to melt to the ground wailing when I asked her what she wanted. Apparently her wish was to tantrum, and so be it.

Was I Done With Saying "Yes" For Good?

To tell you the truth, I hardly remember bedtime. I was a zombie, functioning in mere survival mode. The “Yes Day” had bested me. There may have been fewer power struggles, but keeping up with their demands had exhausted me. To be honest, I think it exhausted them too. The lack of boundaries seemed to push them over the edge of human decency. That, or the sugar. Who knows? I was just glad it was finally over.

Would I ever do it again? No. Was I glad I did it? No. Would I ever suggest that anyone try this at home? No.

More Like This
34 Instagram Captions Perfect For Preschool Graduation Photos
17 Best Potty Training Products For Toddlers
From Captions To Gifts, These Are All The Kindergarten Graduation Ideas You Need
Ashley Graham On The “Fun, Organized Chaos” Of Raising Twins